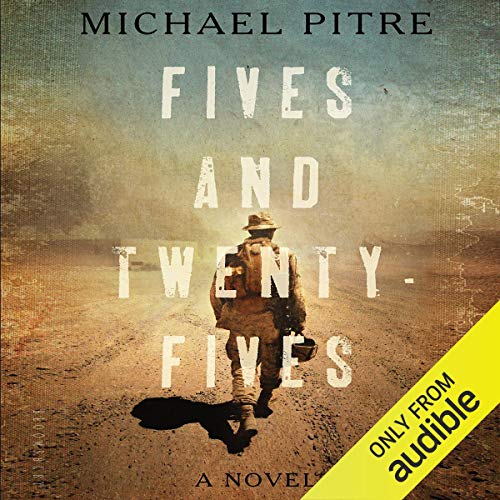 Editors Select, August 2014 - Michael Pitre’s debut novel, Fives and Twenty-Fives, is a richly constructed narrative about the Iraq War. Pitre himself is an Iraq war veteran, and his honest portrayal of the war and its aftermath captures the complex emotions held by so many who were both directly and indirectly involved. Told from multiple compelling perspectives, Fives and Twenty-Fives is nothing short of powerful in its unapologetic authenticity. I'm eager to revisit the book in audio with its multi-cast narration, particularly the character of Kateb, whose transformation from Iraqi university student to translator for American soldiers captivated me throughout. —Katie, Audible Editor

It’s the rule - always watch your fives and twenty-fives. When a convoy halts to investigate a possible roadside bomb, stay in the vehicle and scan five meters in every direction. A bomb inside five meters cuts through the armor, killing everyone in the truck. Once clear, get out and sweep 25 meters. A bomb inside 25 meters kills the dismounted scouts investigating the road ahead.

Fives and Twenty-Fives marks the measure of a marine’s life in the road-repair platoon. Dispatched to fill potholes on the highways of Iraq, the platoon works to assure safe passage for citizens and military personnel. Their mission lacks the glory of the infantry, but in a war where every pothole contains a hidden bomb, road repair brings its own danger.

Lieutenant Donavan leads the platoon, painfully aware of his shortcomings and isolated by his rank. Doc Pleasant, the medic, joined for opportunity, but finds his pride undone as he watches friends die. And there’s Kateb, known to the Americans as Dodge, an Iraqi interpreter whose love of American culture - from hip-hop to the dog-eared copy of Huck Finn he carries - is matched only by his disdain for what Americans are doing to his country. Returning home, they exchange one set of decisions and repercussions for another, struggling to find a place in a world that no longer knows them.

A debut both transcendent and rooted in the flesh, Fives and Twenty-Fives is a deeply necessary novel.

"Powerfully understated debut . . . Everything rings so unshakably true. A war novel with a voice all its own, this will stand as one of the definitive rendering of the Iraq experience." (Kirkus, starred review)
"A thrilling, defining novel of the Iraq War." (Booklist)
“An unblinking, razor-edged portrait of the war...a deeply moving book.” (New York Times)
"Expertly performed by multiple narrators, this audiobook focuses on a Marine engineer platoon in Iraq…. Events are presented from various points of view, focusing on platoon leader Lieutenant Donovan, medic Doc Pleasant, and their Iraqi interpreter, who goes by the nickname 'Dodge.' Interspersed between the characters' narratives are 'official' documents that provide a framework for the story; these are splendidly read in a resonant, authoritative voice. All the characters are portrayed with adroitness, especially 'Dodge' - in a spot-on performance by Fajer Al-Kaisi. This is a production not be missed." (AudioFile)

PASSIONATE INSIGHT INTO WAR AND ITS CONSEQUENCES

Very good series of intertwining story lines, bringing home the reality of the video game that war has become for us non-combatants. I found the characterizations excellent of the three main individuals both in Iraq and outside. Also the different effects upon these people were well presented showing how once having been at war it is impossible to remain the same. The narrations were very believable and in tune with the characters, very powerful book and audio presentation.

Although this book would not be my first choice for a download, I am really glad I did. It was extremely hard to stop listening (finished in less than two days). The situations and their descriptions were eerily realistic and the multiple narrations only added to the experience. I can't recommend this book enough.

Would you consider the audio edition of Fives and Twenty-Fives to be better than the print version?

I have not read the print version, but I like the different voices of the characters.

The lieutenant, because I can identify with that rank and because he seemed like such a regular guy who earned the respect of his subordinates. I admired his humiliity

That there was not a single narrator; there were several, perhaps one for each character, and I liked that.

When his professor made unwarranted assumptions about the Pete's leadership experience.

Who ever thinks about the warriors who daily fight potholes? Time after time, this Marine Corp Engineering group travels the roadways of Iraq fixing the potholes which always contain a bomb meant to blow up the road travelers, the Marines or any passing car.

The novel goes from the days after the Marine squad is released from their combat orders back months to the battles they have fought and the over 150 potholes they have filled up while sometimes taking fire from the desert, from abandoned cars or the tops of buildings.

While at times confusing as to who is telling what portion of the story and when it's going on, the novels story arc still consumed me as a listener-I was addicted to it for a day and night and know this is one of those books I'll listen to again.

It's filled with action but not the kind of action we've read in recent warrior books..these guys have a very unglamorous job and though they are on the front lines of action no one thinks so.

I suggest anyone who has been in the service or who has family in the service now listen to or read this story..and anyone who wants a real live view of what young American men are going thru daily and have been since the early 2000s.

Well worth your credit.

The simple part of any war is having friends and enemies; the hard part is in knowing the difference. “Fives and Twenty Fives” shows the simplicity and complexity of all wars. Any veteran of the American military knows that part of basic training is building a team of soldiers to form a comradeship as strong as civilian friendship. But, there is a difference; i.e. the difference between civilian and military friendship is the underlying command and control requirements of military organizations. The author of “Fives and Twenty Fives” is an ex-Marine. His novel is about friendship; i.e. more fundamentally about friendship on both sides of a war.

The theater of war in Michael Pitre’s novel is Iraq. Unlike a Civil War, within a country of one language, the war in Iraq requires “terps” or translators. Most interpreters are in-country natives and have not gone through conventional military basic training. Command and control is learned by most of these interpreters “on the fly”. Friendship is earned by experience rather than training. Pitre introduces Dodge, the Iraqi interpreter, for a Marine team led by Lieutenant Donovan.

Dodge introduces an underlying theme of “Fives and Twenty Fives” in a conversation with Lieutenant Donovan. Dodge explains that he has no friends because when one chooses friends, the choice entails responsibility and accountability. Dodge is a Sunni, the religious faction associated with Saddam Hussein. He speaks fluent English and studies Huckleberry Finn, a book he carries with him everywhere, to better understand American culture. There are several allusions to the story of Huckleberry Finn that reinforce the theme of friendship; i.e. its implied responsibility and accountability.

There are good and bad people in every government. Undoubtedly, there were some Iraqi Army leaders and Hussein administrators that could have become friends rather than enemies of fellow Iraqis and Americans. If America’s leaders had been more discriminating and understanding, ISIS may never have risen. The simple part of any war is having friends and enemies; the hard part is in knowing the difference.

The books crosses many story lines of war and recovery. You will be moved to place you did not expect.

What was one of the most memorable moments of Fives and Twenty-Fives?

moments when Fives and Twenty Fives does not work and loss of the sergeant.

Wonderful voices for each person in the book

Writing far better than I expected.

The story itself didn't grab me but that's more me than anything.

The craft of the author is admirable and worth supporting.

They all go off with the most noble intent . . . our own two sons included . . . to Iraq to fight the enemy, to help the country rebuild . . . what they find, what they see, what they experienced, well, it's here in this book . . . it's not what we saw on the news . . . it IS what we see in their eyes . . . sad, dark eyes . . . disillusioned from the propaganda that they've been fed . . . sometimes angry eyes . . . rules of engagement . . . being shot at, not being able to shoot back . . . not EVER knowing for sure who the enemy is . . . and trying to break up a fight that's been raging for centuries . . . and is still going today, long after the American withdrawal . . . long after American blood has spilled . . . these are America's real heroes, they go where we send them, they fight our fights, they don't ask questions, they freely give their lives . . . they give up their minds . . . they give up their peace . . . while men in high places make political decisions to send them off to war . . . and families at home wait to pick up the pieces when their sons/husbands/fathers come back home . . . Fives and Twenty Fives is an honest look at the "boots on the ground" that we have sent off to war . . . those that have done America's bidding . . . and the bond that exists between soldiers/marines . . . while serving and forever afterward . . .

Where does Fives and Twenty-Fives rank among all the audiobooks you’ve listened to so far?

This was a very good book. Accurate, per my Army vet husband. And so very sad. Excellent read!

Would you consider the audio edition of Fives and Twenty-Fives to be better than the print version?

Okay, the story itself was pretty good. I finished it and loved it. Jay nyder did a fantastic job along with Fajer Al-Kaisi and Nick Sullivan. These three made it really enjoyable but Kevin; he completely ruins it. You can tell he's reading from a book and he speaks haltingly. It was like the scene in Billy Madison with the little kid in class "T-T-TODAY JUNIOR!" just minus the "th-the-there wa-was" part. Seriously cannot stand that stuff. I can't believe Audible lets this guy continue to be a narrator and get paid for it.