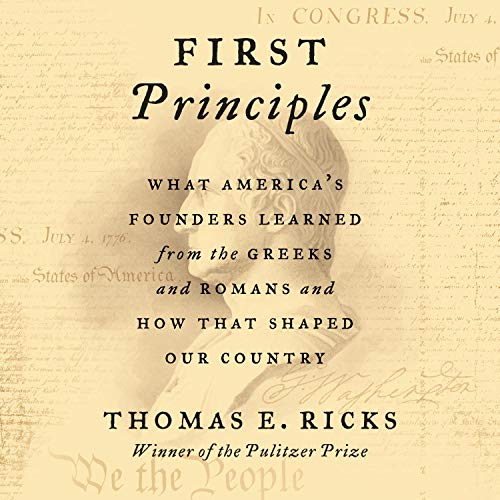 "Ricks knocks it out of the park with this jewel of a book. On every page I learned something new. Read it every night if you want to restore your faith in our country." (James Mattis, General, US Marines (ret.) and 26th secretary of defense)

The Pulitzer Prize-winning journalist and number one New York Times best-selling author offers a revelatory new book about the founding fathers, examining their educations and, in particular, their devotion to the ancient Greek and Roman classics - and how that influence would shape their ideals and the new American nation.

On the morning after the 2016 presidential election, Thomas Ricks awoke with a few questions on his mind: What kind of nation did we now have? Is it what was designed or intended by the nation's founders? Trying to get as close to the source as he could, Ricks decided to go back and read the philosophy and literature that shaped the founders' thinking and the letters they wrote to each other debating these crucial works - among them the Iliad, Plutarch's Lives, and the works of Xenophon, Epicurus, Aristotle, Cato, and Cicero. For though much attention has been paid the influence of English political philosophers, like John Locke, closer to their own era, the founders were far more immersed in the literature of the ancient world.

The first four American presidents came to their classical knowledge differently. Washington absorbed it mainly from the elite culture of his day; Adams from the laws and rhetoric of Rome; Jefferson immersed himself in classical philosophy, especially Epicureanism; and Madison, both a groundbreaking researcher and a deft politician, spent years studying the ancient world like a political scientist. Each of their experiences, and distinctive learning, played an essential role in the formation of the United States. In examining how and what they studied, looking at them in the unusual light of the classical world, Ricks is able to draw arresting and fresh portraits of men we thought we knew.

First Principles follows these four members of the Revolutionary generation from their youths to their adult lives, as they grappled with questions of independence and forming and keeping a new nation. In doing so, Ricks interprets not only the effect of the ancient world on each man, and how that shaped our constitution and government, but offers startling new insights into these legendary leaders.

Well read, clear understanding on how our America became America. I am a Black America, First Principles has enlightened me on my history in this United States of America. I love this country. Thanks to the author for all the hard work put into this audible book. I am going to recommend to all my family and friends!!

The book was excellent, but the epilogue was mean spirited.
I am an eighty-two year old widow who enjoyed a classical education (BA Stanford, MA University of Denver), Latin was my favorite subject, which I studied for three years in a small town high school in the 1950s. By profession I was a university reference librarian. Married to Mac Tschanz, USGS geologist, I followed his career and lived where he lived, so spent only ten years working in my profession.
The book was fascinating in its detail, but I was appalled by the author's epilogue. He singled out the Trump presidency as a singular disaster of our electoral system.
Future historians won't see it that way. They'll see the Democrat's refusal to accept the Trump presidency as an aberration. But was it actually sedition?. From day one Democrats refused to accept the election results. They instituted the Mueller report, based on a lie. Our intelligence services prostituted themselves. Then we had the first impeachment attempt, and now the second impeachment attempt.
Where are the "High Crimes and Misdemeanors" required for impeachment? Is this the new norm for overturning elections?
Both impeachment attempts were political acts to disenfranchise the electorate. We witnessed Hillary Clinton's accusation that Trump followers were a "Basket of Deplorables." Is that also the author's assessment of the American electorate?
I am a conservative, the author of "Under the Condor's Wing: A Memoir of South America," a patriot, and the matriarch of ten college educated, productive Christian citizens. The Democrats, not Trump followers, have been at fault. Does his criticism of Trump imply a criticism of all Trump supporters? Virginia A. Tschanz, January 23, 2021

An important work on who we were and who we are.

Ricks is not a renowned historian and in the beginnimgof this book, it shows. However, it eventually becomes clear that he is covering a topic that is not a static one and of great importance to understand in terms of who we were and who we are. It is a topic that has been staring us in the face for many years and yet has gone untold. How was this nation and its founders so driven by the examples and lessons of antiquity and yet today, we are not even conversant in the references? What does that say about how we are to understand the founders words and actions and how does this inform our current political and even individual psychological dilemmas? I will have to read this again after re-engaging with some of the classixal works. I highly recommend this book.

Ruined it with the epilogue.

A fine review of the first 4 Presidents. Why it was ruined with partisan and bald faced insults to the current President. Like the man or not, it was unnecessary and petty.

Great book that was well read. The biggest problem the list of books,letters, documents and other books i now need to read.....

History at its best

Required Reading for Every Patriot

Not good... more a history textbook

I thought this was going to be a compilation of philosophical concepts that ended up informing the founding documents and core values and ideas. It ended up being a history textbook on individual’s lives (founding fathers and supporting cast), their upbringing, and major historical events (battles, meetings, continental congress, etc). In fairness it does throw in references to individuals whose works influenced the founding fathers... but it more just gives names and repeats the words virtue constantly. Virtue Ethics is a field with hundreds to thousands of works yet any major framework or concept of the field is not expanded on in this book. I’m also surprised that the book covered very little if any political philosophy. The justification of the foundation of a state. The legitimacy of taxation and “restricting” rights for common welfare or safety. This is just one of many concepts I could have seen the book go into but it just didn’t.

I’m glad the book touched on how unethical slavery was. But it doesn’t actually expand on the historical context or the way it was justified. I do not believe slavery is justified, at all, but it would have been useful to know how prior thinkers “allowed” it so we don’t make the same mistakes.

In summary, this is not a philosophy book nor a book on ideas. It is neither a psychology not sociology book. It does not discuss compare political systems (even as simple as monarchy vs democratic republic). This is a history book. If that’s what you want, it’s here.

The narration was great, no qualms. Enunciate with good flow and pace.

Fascinating journey with a questionable finish

Very engaging and new perspective on the founders. Final analysis unfortunately not well justified. At the end the author provides what he thinks the founders would think of today's world and political structure and attitudes. He makes some assertions which don't appear to have good justifications and makes some common, but false, statements about Trump which will date this otherwise interesting study on our founding fathers.

A definitive history must read

Thomas Ricks captures the underlying history what makes America America. Including the original sin of slavery and the way it has manifested since the beginning of the country makes it clear that we are a work in progress. We have at least as far to go as the journey so far. True true understanding of the Genesis of this country requires an equal understanding of the influence of classical Greek and Roman principles as well as those of the enlightenment. A particularly surprising element to this reader was the influence of Scottish scholars on the education of the founders, particularly the first four presidents.