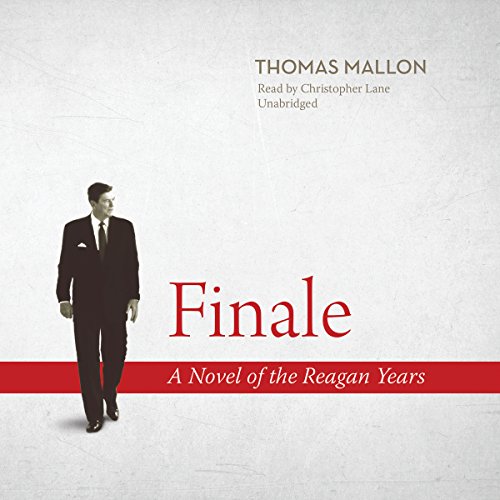 From the author of the acclaimed novel Watergate comes a galvanizing new novel about the tumultuous administration of the most consequential and enigmatic president of modern times - Ronald Reagan. Finale takes listeners to the political gridiron of Washington in 1986, the wealthiest enclaves of Southern California, and the volcanic landscape of Iceland, where the president engages in two almost apocalyptic days of negotiation with Mikhail Gorbachev. Along with Soviet dissidents, illegal arms traders, and antinuclear activists, the novel's memorable characters include Margaret Thatcher, Jimmy Carter, Pamela Harriman, John W. Hinckley, and even Bette Davis, with whom the president long ago appeared on screen. Several figures - including a humbled, crafty Richard Nixon; the young, brilliantly acerbic Christopher Hitchens; and an anxious, astrology-dependent Nancy Reagan - become the eyes through which listeners see the last convulsions of the Cold War, the AIDS epidemic, a clash of ideologies, and a political revolution. At the center of it all - but forever out of reach - is Reagan himself, whose genial remoteness confounds his subordinates, his children, and the citizens who elected him.

Gore Vidal for the 21st Century

The novels Watergate and Finale have a similar style to Vidal's historical novels. The characters are always in verbal chess. I liked Watergate a little more because it had a more coherent story line but Finale is very good also. I would really give a 4.5 but didn't have that option. The reader, Christopher Lane is very good too. He does a good Reagan, his Nixon is not as good but it's ok, he is very good overall.

One minute Nancy Reagan is confiding with Merv Griffin, the next Richard Nixon is telling Zsa Zsa Gabor that he was responsible for bringing dancing to Whittier College as a student leader there. The dialogue is well paced and fun, capturing some of the more interesting doers and their deeds in 1986, largely, when Reagan and Gorbachev were negotiating the end of the Cold War. And the narrator capably captures a parade of personalities. This is a good read and ultimately through the magic of fiction creates a portrait of the Reagans that is as plausible and real as any biographer can conjure. This also is a terrific companion to the author's novel about Watergate.

I would have liked more of the top-level political strategizing. Many of the characters here were, I suppose realistic, but often petty in mentality and focus. I did get a sense of what the lesser bit players must struggle with, in DC intrigues that often spill over into ugly public spectacle, even as they try to develop meaningful personal lives and relationships. Conflicting interests sprawling across personal encounters must abound in DC.
I have the eternal problem of historical fiction whenever I am not expert in the players: what parts of this are verifiably true, what parts not? For example, Christopher Hitchens is a character here, but were his dalliances and statements, as told here, correct? How much is fabricated?
As for the dementia-POV part, I was not terribly impressed: it was an interesting concept, but mediocre in execution, in my opinion. Its main benefit was being mercifully short.
The portrayal of Ronald Reagan, to the extent I know it, rings true.

Impressionistic and fun but not much there

This is a fun book that aims to give you an indirect portrait of President Reagan. The funniest character in the book is Richard Nixon surprisingly. It if you are feeling for the zeitgeist of 1986 87 but doesn't really have a plot it's more about how people are affected by politics in their personal lives. I recommend it but it's not the best listen to this year