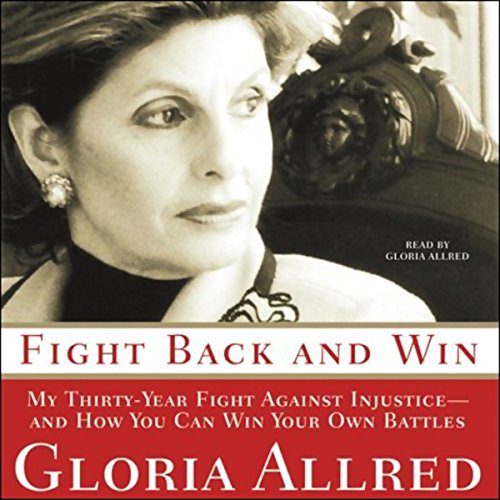 Fight Back and Win

My 30-Year Fight Against Injustice and How You Can Win Your Own Battles
De : Gloria Allred
Lu par : Gloria Allred
Durée : 6 h et 19 min
Catégories : Biographies et mémoires, Femmes
5,0 out of 5 stars 5,0 (1 notation)

Fight Back and Win

Fearless lawyer, feminist, activist, television and radio commentator, warrior, advocate, and winner, Gloria Allred is all of these things and more. Voted by her peers as one of the best lawyers in America, and described by Time as "one of the nation's most effective advocates of family rights and feminist causes", Allred has devoted her career to fighting for civil rights across boundaries of gender, race, age, sexual orientation, and social class. She has taken on countless institutions to promote equality, including the Boy Scouts, the Friars Club, and the United States Senate, often drawing from her creativity and wit to achieve results. And as the attorney for numerous high-profile clients, she has represented Nicole Brown Simpson's family, actress Hunter Tylo, and Amber Frey, Scott Peterson's girlfriend, Allred has helped victims assert and protect their rights.

Throughout her extraordinary memoir, in such chapters as "To Conquer, You Must First Conquer Yourself" and "Don't Be Victimized Twice", Allred offers colorful, sometimes shocking, examples of self-empowerment from her personal and professional life. Presenting nearly 50 of her most memorable cases, she takes us deep inside the justice system to show how it's possible to win, even in the face of staggering odds.

Allred opens our eyes not only to the significant positive strides we've made in recent decades, but more important, to how much further we still have to go to empower all members of society, especially women, minorities, and others who are deprived of their rights. Fight Back and Win is a powerful testament to Gloria Allred's trailblazing career and the battles she has fought alongside countless brave individuals to win justice for us all.

Gloria Allred so impressed me with her book in every way. What a decent, compassionate and generous person she is to look out for those who have been hurt against bad guys and bullies. What I would not give to have her in my corner! I was very inspired and uplifted and will read this multiple times just for that effect. Highly recommend especially if you are being bullied and need strength and courage.

Where does Fight Back and Win rank among all the audiobooks you’ve listened to so far?

In the top 5, it's one of few 6-7 hours books that I listened to non stop until I finished it.

What other book might you compare Fight Back and Win to and why?

Lisa Bloom's 'Think' ... Lisa is Gloria Allred's daughter and that is what lead me to her book, they are very similar in their attitude, outlook and ways of thinking about things. They also have a very similar sense of humour. Both great books for women, or men for that matter.

I laughed every time she impersonated most of the men mentioned in the book!

A must read/ listen for any woman, this lady and her willingness to fight unfairness, even if there is a possibility of losing should be an inspiration to all women. It is to me anyway. If you don't take on what challenges you, you allow it to defeat you anyway.

Love It so much, what an amazing inspiration!!! All women and men should read this book

She's an inspection. and she does funny voices. I recommend this book to learn more about our legal system and her.

history is super interesting and I loved hearing about all of the legal cases that have changed history. I had a hard time relating to the empowerment section at the end because really good legal help is expensive and out of the reach of many people but I do understand that if you have the time and drive you can find someone to help you. I love her spunk!

This is a very good and easy to read book. It's message is empowering and delivered in an interesting way through discussion of well known (and some lesser known) cases.

I love this woman. She is intelligent and such a fighter! I want to be just like Gloria Allred.

I really enjoyed the book. Gloria presents the book. its great to hear her story in her own voice. Finished in 2 days! I couldn't stop listening