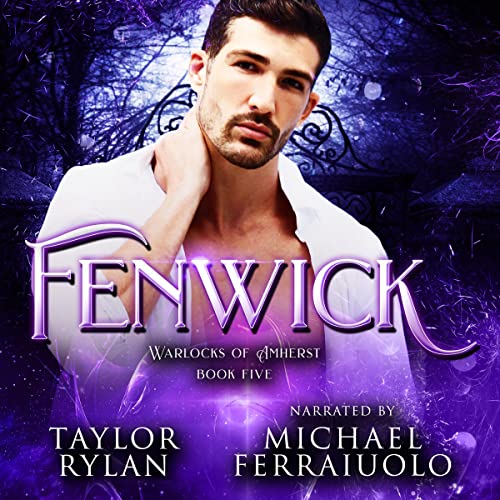 When Fate steps in and Fen and Sev cross paths, will they be able to make things work?

Fenwick Thompson isn’t like the other warlocks in the Amherst Coven. He’s not looking for his One. And he’s certainly not wanting to be a father. No, there are more than enough children running around the estate to drive him crazy. What he needs is a vacation. What does he get? His One in the form of the sexy vampire Sev.

Severino Rossi loves his life as a blackjack dealer on the Beloved Gem. His coven aboard the riverboat casino affords him the opportunity to meet new people, but when it comes to love, Sev knows it’s no use. Not until he meets his beloved. When he comes face-to-face with Fenwick, he’s completely unready for what it means to have found his beloved in the sexy warlock.

Unprepared for what fate has in store for them, Fen and Sev must figure out how to deal with a pregnancy they weren’t planning for while deciding which coven they’ll call home.

Fenwick is the fifth book in the Warlocks of Amherst series. Each book in the series focuses on a different couple but these books should be listened to in order as previous couples will make appearances in future books. This book is intended for adults only. This is a fated mate MPREG story with plenty of magical sexy times. You should expect all the normal vampire markings, but sometimes love bites in unexpected places.

I absolutely love this whole world! Taylor Rylan just makes me fall in love with these characters. I love Fenwick and Severino! I love reading this story and I love listening. Michael Ferraiuolo doesn't disappoint with this narration. I love the voices and the emotions he brings to these amazing stories. Absolutely amazing!

Fen is pretty content with his life and isn't looking for his One or children in the near future. Sev enjoys his life and is content as well. Then the two meet and realize that they are fated. As they try to figure out how their mating will go with what they had planned, there are bumps and curves.

Narration was simply amazing as always.

While the characters are fated mates, they did have to overcome their own personal views on how they thought their lives would be. It is a low angst book. I will admit I did struggle with Sev’s character as he did drive me nuts for the beginning of the story . I was happy to see them finally opening up to one another. Narration was great.

Fantastic!! This was the final story in the Warlocks of Amherst story line and I’m going to seriously miss these guys. They kind of feel like family. I loved Fenwick and felt heart sick in the beginning. Severino was a little hard to warm up to. They both had difficulties and misgivings that they needed to work thru. They both struggled with any type of emotional connection. I seriously loved all the secondary characters in the story. I cannot wait for the vampires!! Fantastic conclusion to the series! Michael Ferraiuolo does a fantastic narration with this story! Each voice clear and distinct to the characters.

I love this story. The character have to work for that HEA. And the story they weave to get their is brilliant. And yeah!!!! Time for the beloved crew to join the fun!!

Fenwick and Severino are an unlikely couple.
Fenwick, Warlock, the quiet-loving computer nerd, Severino the Vampire, an associated blackjack dealer.

A wonderful continuation of the Warlocks of Amherst series, with lovable characters, a world that you will not want to leave again

Michael Ferraiuolo is the perfect narrator for these books, he brings the characters to life with so much emotion it's profoundly compelling