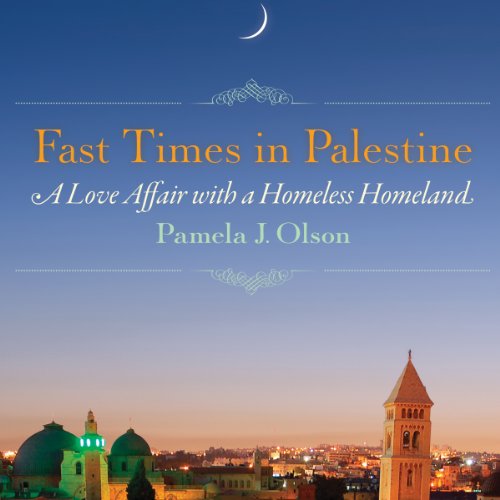 This lightning-paced audiobook is the memoir of an outrageous character, Pamela Olson. She has enough wit and guts and spirit for us all. Listeners will be subtly drawn into Olson's life by Julia Farhat's narration of the audiobook, which is sweet, quiet, and accentuates the beauty of the book's prose.

Set in Palestine, the memoir isn't merely expat or travel literature. It touches on subjects that speak to all human beings living in this complex modern world - love, curiosity, conflict, and a feeling of instability. Listeners will oscillate between being shocked at Olson's crazy adventures, and reassured by her familiar spirit.

Pamela Olson, a small town girl from eastern Oklahoma, had what she always wanted: a physics degree from Stanford University. But instead of feeling excited for what came next, she felt consumed by dread and confusion. This irresistible memoir chronicles her journey from aimless ex-bartender to Ramallah-based journalist and foreign press coordinator for a Palestinian presidential candidate.

With dizzying speed she found herself attending Yasser Arafat's funeral, tour-guiding Israeli friends around the West Bank, dating a Palestinian from a conservative village, being held at gunpoint and injured by a stun grenade, and witnessing the 2005 Disengagement from inside the Gaza Strip. The gripping narrative focuses not only on violence, terror, and politics but also on the daily rounds of house parties, concerts, barbecues, weddings, jokes, harvests, and romantic drama that happen in between.

Funny, gorgeous, shocking, and galvanizing, Fast Times in Palestine challenges the way we think not only about the Middle East but about human nature and our place in the world.

Palestine from the Inside—and Out

Pamela J. Olsen was a Stanford physics graduate who followed her curiosity to the Middle East and quickly ended up living and working in Ramallah.

Olsen is such an engaging writer, that I got caught up in the small human dramas around her, as she did, forgetting that this was in one of the most contentious places in the world—until something extraordinary would come up.

For instance, traveling to Jerusalem to retrieve some hospital papers for a boy shot in the back so his family could get permission to travel to see him, she was stonewalled by the hospital staff, the boy wasn't worth the trouble. A simple request met with casual racism.

With lovely prose, and no agenda but that of reporting her experience, she paints relatable portrait of a difficult and complicated situation.

Julia Farhat’s narration is friendly and immediate, conveying the "American girl who’s eyes are opened abroad" in a believable way.

I really enjoyed listening to this book. Told almost as a travelogue and filled with stories and colorful people, it somehow made the reality of this heartbreaking story enjoyable. Olson did a nice job of painting a picture of what life was/is like in the West Bank from all the different perspectives and the tragedies that seem to fill the days there. I feel like I have a better understanding of the conflict from the Palestinian side now and it isn't pretty. Not that you expect it to be but it certainly begs for intervention. I highly recommend this book.

Woven into the story are explanations of areas, acts and peoples' thinking. A personal story of a young girl's experiences living and working in Palestine in the early-mid 2000's includes relevant historical acts.

I loved the Audible clip and share feature as well as the 30 second rewind and faster reading speed options. Now on to listening to my second Audible book.

A view of the conflict that needs to be heard. This book shines a light on so many injustices that the Palestinian people face on a regular basis. Most people see Israel as the victims but ever since 1948 they have ruled over the Palestinians. Tears will flow when you hear of some of the first hand experiences. Supporters of Israel should read this book to see what they are really supporting.

A Trip Down Memory Lane

This audiobook was an amazing journey through time to 2013, to my trips to Palestine. I cried multiple times listening to this story, empathizing deeply with Pamela's tales of love, horror, fear, sorrow, loss, and - ultimately - joy.

I could smell the fresh baked bread of the bakeries of Ramallah through her vivid descriptions and lush storytelling. A natural writer, Pamela both perfectly encompassed the beauty of Palestine and her amazing people, and simultaneously failed to convey the magnitude of the glowing fires of love and peace in one's heart that Palestine can kindle.

I would recommend this book to anyone who is cognizant of the fact that the world is a big, nuanced place, full of interesting stories and people. I urge readers to set aside their preconceptions and biases, and buy this book. Take a trip through the holy land with a small town girl living a big, big life.