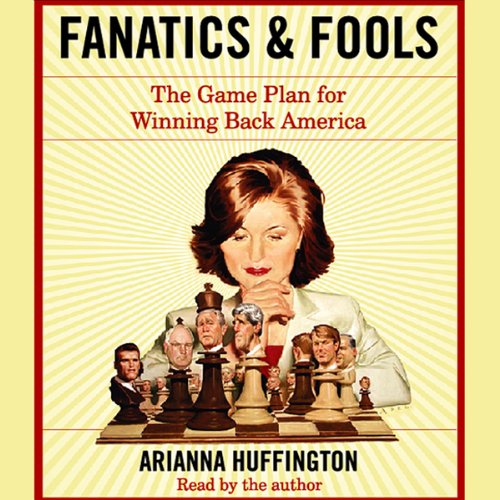 In Fanatics and Fools, political pundit Arianna Huffington reveals everything we need to know about the dirty game of Washington politics. She poses key questions: How did self-righteous Republican zealots gain control of our government? How did they obliterate Democrats and shift politics so far to the right? Why have they been allowed to redefine the right and betray true American democratic values?

Huffington takes on a long view of American political history and leadership to remind us that at one time America's leaders were people of daring, passion, and intelligence. By contrast, today's leaders (people like Dick Cheney, John Ashcroft, Tom DeLay, Donald Rumsfeld, Paul Wolfowitz, and Bill Frist) are "dangerous Fanatics". Those who don't oppose them are "spineless Fools". Huffington holds the feet of the Fanatics and Fools to the fire while offering us a blueprint for returning power to this country's rightful owners: the people.

"Huffington effectively mounts an assault on both ruling parties and firmly rebukes any who would still challenge the seriousness of her political ambitions." (Publishers Weekly)