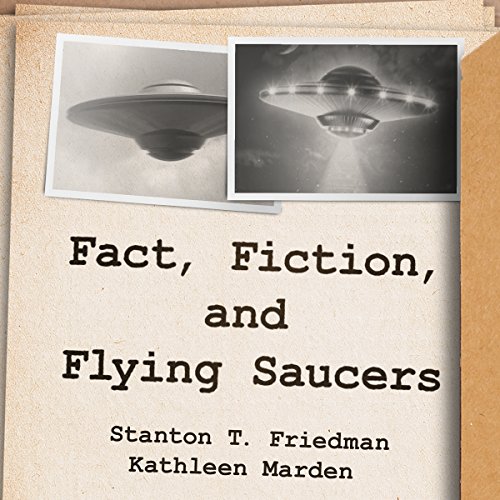 There is a clear conspiracy to deny the existence of UFOs.

The mainstream media has misinformed us for years about UFO studies conducted by highly regarded scientists associated with some of the finest universities in the country. There is significant evidence that the US government has covered up the alien presence through misinformation, distortion, obfuscation, and ridicule. Some prominent, politically connected scientists have engaged in the cover up. And a few professional writers have helped to successfully label any scientists who have been persuaded by the evidence and brave enough to take a stand as unscientific charlatans, fanatics, and kooks.

Fact, Fiction, and Flying Saucers examines the wealth of archival documents that clearly demonstrate this cooperative disinformation effort and refute the false claims made by these professional scoffers. Stanton T. Friedman and Kathleen Marden set the record straight by examining politically motivated misinformation and presenting compelling evidence that separates fact from fiction.

Beware of the Narrator!

The narrator speaks with what sounds like a very fake, pretentious, and emasculated tone, as well as drags out words at the end of every sentence. It makes me feel sick to the stomach listening to him. I wonder if this is his natural way of speaking or why he felt necessary putting on such exaggerated airs. Though I love the subject matter of the book, I couldn't bear listening to him for even 5 minutes and won't listen to this book again.

Who would you have cast as narrator instead of Chris Sorensen?

Any other narrator I've heard on audible.

Could you see Fact, Fiction, and Flying Saucers being made into a movie or a TV series? Who should the stars be?

Anyone but Chris Sorensen.

The personalities and their motives in UFO history

This book helps clear up the mis- or dis-information issue.

The book has a slow start, and I almost bailed on it, but about the 4th chapter it finally hit its stride. One reason, too, that I almost quit is the tone of the narration. But, if I focus on the positive . . . the narrator has a clear voice and is understandable . . . then I can just keep listening.

I have sampled various UFO books and documentaries, but not to the level of knowing a lot of the people / authors / speakers in the UFO field. From time to time I've seen Stanton T. Friedman on documentaries or youtube lectures - with quite a difference in his age spanning through years - and have always liked his "left-brained" approach and presentations. His telephone interview on Grimerica earlier this year was fun listening and shows that he has evolved and changed too.

Kathleen Marden is less familiar to me, and while I do recall listening to at least one great interview she did earlier this year, I look forward to hearing / reading more of her research.

This book can be a valuable tool for future researchers in sifting through the various historical data and the personalities associated with the data. It's good to have a better understanding of who wrote what and especially who they were (or might have been) affiliated with, what their motivations may have been, and what happened "behind the scenes" too.

Although this book is a fact based outlook on the UFO phenomenon and does cover many of the well known accounts, the book does take a settling scores attitude about a third on the way in. Stanton Friedman and Kathleen Marden are avid UFO researchers and one is a former nuclear scientist with real credentials whose work I both like and respect. I am of two minds about this book though. On one hand, it seemed like an aging Friedman and Marden used this book to settle scores with long dead opponents who can no longer defend themselves (although they also praise long dead allies). Let it be known that for the most part I agree with Friedman and Marden on most of his accusations although there are a few spots where both sides are just petty and confrontational. One the other hand, I am quite pleased that Friedman and Marden dismantle "UFO charlatans" such as Bob Lazar and Billy Meier whose stories are not only unfactual but cause real problems for actual scientific study of the phenomenon. They also, to a lesser extant, try to disassemble some of the more fantastic accusations (alien hybrids and secret underground alien bases) made by other UFO researchers who do not use creditable sources or verify their sources. They do this very little and without naming names probably to avoid unuseful contention is an already convoluted subject. This book is a good addition to ones UFO library especially if you are not familiar with how creditable UFO and military research is conducted (opposed to those that do not do those things i.e.Nick Redfern). This book is also a good example of the UFO research people interested is this subject should be reading. It is ,however, not a good starting point if you're just getting started with this subject. This book is best for someone who has read numerous or at least a few other serious (and maybe not so serious) UFO research books and possibly UFO skeptic books (as part of the scientific process is both hearing both sides of the argument and keeping an open mind) as it references many other UFO authors, their work, and the UFO skeptics and their work.

The information and history lesson provided is priceless. The person they chose to read this has no business narrating audio books. He is very dry and actually put me to sleep a few times.

Loved learning about science and astronomy - My favorite two subjects!!! The reader was somewhat irritating at first because he hangs onto the last syllable of a sentence for too long. But other than that, I loved every minute!!!

Loved the detail. The reader wasnt good. Freidman would of been better. Overal good data

If you want a down to earth approach to UFOs, then this is the book you want to read first.

Fantastic research and historic document from the Dean of Legit UFO researchers.

However, whomever hired the narrator needs to be fired and go work in a mail room. 7 plus hours of that nasal and snide voice feels like I was probed and chipped and left by the side of the road in someone elses clothes.

Stanton Friedman used to be one of my favorite UFO researchers. Unfortunately, he appears to have let personal animosity and bitterness take over his work. Far from being an objective study of the phenomena, this is just a long-winded ad hominem diatribe. Sad.