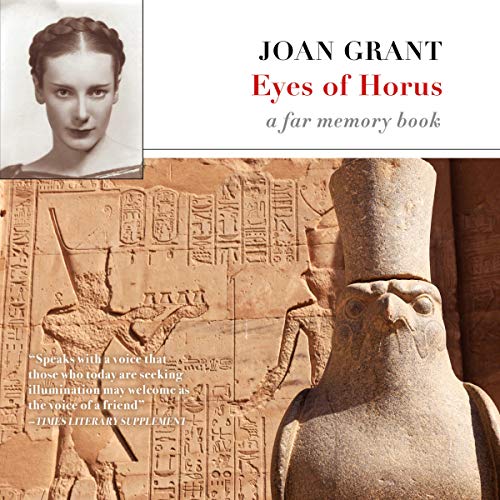 The third of Joan Grant's "Far Memory" novels, Eyes of Horus is set in Egypt at the close of the dark XIth dynasty and is a profound commentary on the power of fear and the unlimited ability of light to shatter it.

Eyes of Horus is the story, told in the first person, of Ra-ab, heir to the Nomarch of the Oryx, one of 18 provinces in Egypt. He comes to learn that the Oryx is different from the rest of Egypt, in that it is still in touch with the light. The rest of Egypt is plagued by fear and ruled by corruption. The pharaoh is an ineffectual ruler. The priests have replaced the worship of Ptah with the worship of Set. Only the Oryx has cast off these shackles - and it is from the Oryx that a silent brotherhood arises of the eyes of Horus-the Watchers of the Horizon - to work and wait for the dawn of a new age in Egypt.

"Send Fear into Exile" is the Watchers' password, and when the time is ripe, Ra-ab leads the Oryx and its followers to victory-and a new Egypt.

Joan Grant wrote several "Far Memory" novels, based on what she believes are memories from her previous lifetimes in ancient civilizations.

Captivating past life of Joan. Wishing I could remember my relevant past lives as vividly to teach me the lessons I need today…

Eyes of Horus and Lord of the Horizon tell the story of Ra-ab, a Nomarch of the Oryx, a nome of ancient Egypt.

These are the first Far Memory books with a male perspective, and yet it isnt an unfamiliar voice.

Both books are enjoyable and teach further lessons on how to live for love and not in fear.