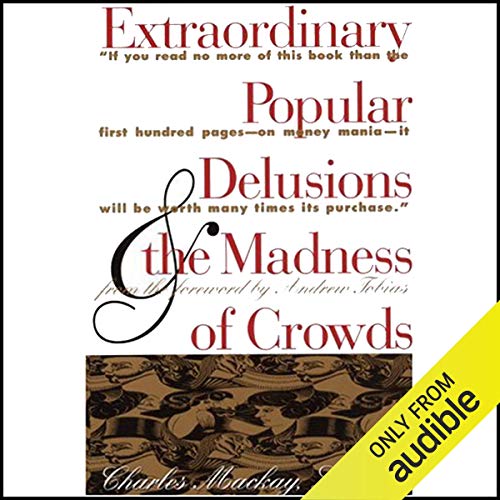 Extraordinary Popular Delusions and the Madness of Crowds and Confusion

Extraordinary Popular Delusions and the Madness of Crowds and Confusion

Charles Mackay covers many types of delusions, among them financial manias like the South Sea Company bubble of 1711-1720, the Mississippi Company bubble of 1719-1720, and the Dutch tulip mania of the early 17th century. According to Mackay, during this bubble, speculators from all walks of life bought and sold tulip bulbs and even futures contracts on them. Allegedly some tulip bulb varieties briefly became the most expensive objects in the world during 1637. Mackay's accounts are enlivened by colorful, comedic anecdotes, such as the Parisian hunchback who supposedly profited by renting out his hump as a writing desk during the height of the mania surrounding the Mississippi Company. Financier Bernard Baruch credited the lessons he learned from Mackay with his decision to sell all his stock ahead of the financial crash of 1929.Other chapters are devoted to Alchemists, scientists and pseudo scientists who attempted to turn base metals into gold. Mackay notes that many of these practitioners were themselves deluded, convinced that these feats could be performed if they discovered the correct old recipe or stumbled upon the right combination of ingredients. There are also extensive treatments on the Crusades, Witch Mania and Trials and other forms of mass delusion.

This is not the unabridged version of the book. While what was included was interesting, I am more interested in the full version.

"It is wise to enjoy that which is possible without hoping for the continuance of a favorable conjecture and the persistence of good luck."
- Joseph de la Vega, Confusión de Confusiones.

I work in finance and read a lot. Most people assume I read a bunch of business and finance books. Not really. Often, I think you learn more about leadership from history and more about people from poetry and fiction that you can ever find in a business or leadership book. But I've always wanted to read these two pieces. Bernard Baruch was a huge fan of Mackay's "Extraordinary Popular Delusions and the Madness of Crowds" and both books seemed too damn perfect for this Bitcoin, market volatility moment.

Without giving away the game, this book is actually two major pieces and a fantastic introduction:

1. Introduction to both works, with historical background, by Martin S. Fridson (probably one of the best known analysts in the high yield world). Fridson puts both books into historical and financial perspective and introduces both authors.

2. Extraordinary Popular Delusions and the Madness of Crowds (1841) by Charles Mackay is divided up into three case-studies:
i. The Mississippi Scheme/John Law (1716-1720): Dealing with France during the era between Louis XIV and Louis XV (Duke of Orleans as regent) and Law's involvement in both paper money AND the French enthusiasm for the Mississippi Scheme. It details the rise and fall of both Law and how this financial disaster almost destroyed France (one could argue that it was a big contributor the the French Revolution).
ii. The South Sea Bubble/Harley Earl of Oxford (1720): Deals with a similar bubble as the Mississippi Scheme, but was handled a bit differently and ended a bit neater. But again, Mackay details the same factors driving the stock prices up, and what eventually lead to the collapse of prices.
iii. Tulipomania : Holland's experience with the Tulip bubble (1636-1637). Primarily in the Netherlands, but also to a lesser degree in England. Mackay details the mania and its spread, as well as the implications (legal and social) after its collapse.

3. Confusión de confusiones(1688) by Joseph de la Vega is a book, written originally in Spanish by a Portuguese Jew, published in Amsterdam. Like Mackay, De la Vega is at heart a poet, so the book contains Biblical allusions, mythology, etc., but focuses on the Amsterdam stock exchange, and looks primarily at the trading of shares of the East and West India Companies. It is amazing (AMAZING) to think that within a decade of the Dutch East India company being created, markets had already developed that would not just buy and sell shares, but options, futures, calls, puts. The market in the 1600s in Holland doesn't feel too different than the NY Stock Exchange or NASDAQ of today.

It is hard to pick a favorite between these two. Both men had financial brains but the hearts of poets. I loved them. De la Vega sees more method in the madness of the markets, while MacKay sees the mass hysteria as the cause of crazy markets. Both men are probably correct to degrees. Both men are hugely influential in the way we think about the market, risk, speculation, and people. Just like I'd recommend poetry to financial analysts, but I'd recommend these financial books to poets. No one will be disappointed.

A client recommended this book to me. I found it fascinating as well as challenging to keep straight. The language is old fashioned and since it’s been a long while since I’ve been on a trading floor, I’m a little rusty on certain exchange related jargon and ways of thinking. But, I’m glad I got through it. Given where the stock exchange is today along with Bitcoin, it seems we are primed for “confusion de confusiones.”...

A classic in the real sense of the word.

Would you consider the audio edition of Extraordinary Popular Delusions and the Madness of Crowds and Confusion to be better than the print version?

It seems this book is timeless.

What does Victor Bevine bring to the story that you wouldn’t experience if you just read the book?

It's a book you can read bit by bit, taking time to think about it. Now I want to let it sink in and read it again in a few months.

This book makes you see society in a new light, and notice trends around you. Although the vocabulary and the style make it seem ancient, it's still very topical.

Also includes Confusions of confusions by de la Vega, another essential for a reading list. 2 birds, one stone.

Message is better off read as a summary

A classic investment book according to the investment community but very wordy and better off read as a one page summary. I felt like I was in English literature class all over again...