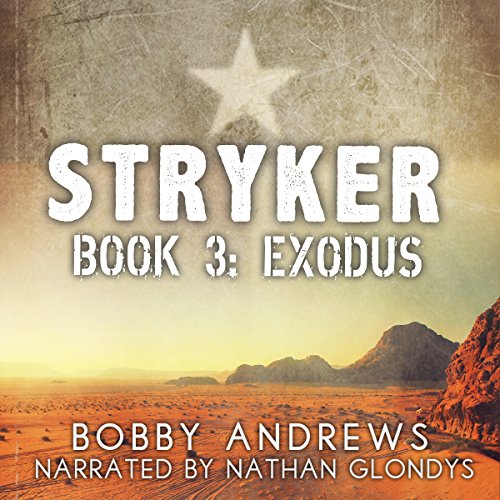 From best-selling author Bobby Andrews comes the third book of the Stryker series.

ISIS unleashed a weaponized version of the deadly Ebola virus, killing 97% of the world's population. Only the immune and those who hunkered down in remote locations remain.

Through the chaos that remains strides a giant of a man known only as Stryker. He is a former Force Recon Marine who has lost as much as anyone, but fights to preserve his honor and creed in the face of slave traders and rogue military elements who prey on the innocent. Edwards, his former battle buddy joins him. Together, they care for three young women who survived the plague and attempt to give them lives that are as normal as possible under the circumstances.

After things began to settle down, Stryker and his group started looking for a better place to live and during the search they witness ISIS fighters unloading from freighters in the Corpus Christi, Texas, harbor. Our band of heroes face several encounters with danger, including the epic battle with the band of ISIS terrorists who have invaded the homeland with the intent of occupying what is left of the United States.

But Stryker has another idea for the terrorists: elimination.

After concluding their battle with ISIS, with the help of an air strike from a still-functioning US Navy aircraft carrier, the group strikes off to make a new life in San Diego, where the captain of the carrier has decided to berth the ship and use the nuclear reactor to power the San Diego Naval Station and to begin efforts at rebuilding the country.

Follow along as the former Recon Marine and others overcome obstacles and danger in an effort to keep what is left of the American population safe from every threat.

Book 1 was excellent….. But I could not get past first 10 min of Book 2. Nathan Glondys should not be narrating Audiobooks… HIS VOICE SOUNDS LIKE A BAD COMPUTER GENERATED VOICE…

first, let me say that I really liked the first 2 books, gave first 5 stars and second 4. I don't know what happened here but it's not good. narration is so painful it was almost impossible to finish. imagine the 6 worst voice try outs for TomTom GPS that were rejected, then mix 1 part story line from one of my daughter's Barbie movies with a PG rated soft porn story line with a large pinch of apocalypse and you have the story line. the author goes into great detail about how Stryker or one of his supermodel gf's make coffee at least 4-5 times on a stove......in a world where all women over 26 and 120 lbs are dead, leaving only brain dead big boobed sports illustrated bikini models in a wet shirt and panties alive , to cavort across the wasteland while Stryker kills almost every male he encounters, would please most 15-18 year old boys taste, it only made me see Barbie movies in a whole new light. for what it's worth, I am a huge fan of dystopian fiction, just not this book.

Narrator kinda ruins it for me

Story is kinda average for the genre. I liked the story fine when Kevin Pierce was narrating. This guy kinda ruins it for me. Unfortunately, I bought them all when I thought the narrator was Kevin Pierce, since he narrated the first book. So, I will suffer through it and regret my hasty purchase.

Stryker, Erin and Hailey continue their journey to San Diego in order to join with carrier forces believed to be stationed there and to regroup in a more moderate climate. Unfortunately Stryker lost his battle-buddy Sarge to cancer, which cast a solemn shadow over the group and greatly decreased their abilities. Stryker’s other Force Recon buddy Edwards was still out Portland-way with Elle searching for his parents or some clue as to their existence. Stryker continues with his eerie ability to rescue young single women by adding a couple more survivors to his group and then delivering them to their homes. We follow Stryker’s crew as they head west and encounter both good and bad situations.