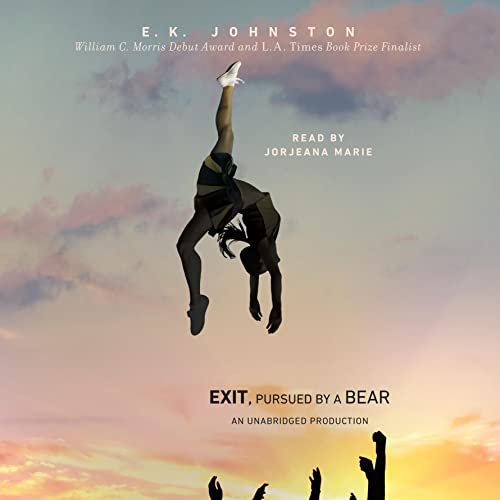 Exit, Pursued by a Bear

Hermione Winters is captain of her cheerleading team, and in tiny Palermo Heights, this doesn't mean what you think it means. At PHHS, the cheerleaders don't cheer for the sports teams; they are the sports team - the pride and joy of a tiny town. The team's summer training camp is Hermione's last and marks the beginning of the end of...she's not sure what. She does know this season could make her a legend. But during a camp party, someone slips something in her drink. And it all goes black.

In every class there's a star cheerleader and a pariah pregnant girl. They're never supposed to be the same person. Hermione struggles to regain the control she's always had and faces a wrenching decision about how to move on. The assault wasn't the beginning of Hermione Winter's story, and she's not going to let it be the end. She won't be anyone's cautionary tale.

"E.K. Johnston's latest gripping novel for young adults...is both a well-plotted whodunit and a tightly woven examination of how we as a society respond to - and often judge - rape victims." (The Chicago Tribune)

"A powerful rape survival story to make you believe in a better world." (The Rumpus)

An interesting change in a YA novel

I would recommend this book to anyone interested in YA novels or in feminist literature. This is one of the few book I have ever read that dealt with rape in such a 'in your face' way. In most books, the person who is raped takes on a victim's mentality, which is understandable. However, in this book, the protagonist moves through the stages of grief to take control of her body and life. I wanted to cheer for the girl. She was strong without losing her humanity. I would wholeheartedly recommend this audio edition.

What other book might you compare Exit, Pursued by a Bear to and why?

I think that is some ways this book felt like a modern Judy Blume.

When I finished the book, I actually wanted to clap for the author and the narrator. The author did such a good job bringing the protagonist to life. I loved that the girl was strong and still humane to herself. Without spoiling the ending, I was surprised at what Hermione decided to do and why.

This book was recommended to me and I'm glad I read it, but it was difficult to start. I knew the main character was going to get hurt and I didn't want it to happen. I am impressed how the author handled the topic and how well thought out the characters are. I haven't been through something as terrible as what happened, but in trying to work toward a big goal of mine, I was defrauded out of a large portion of my savings. I could relate to the loss of trust and the pain of reliving the crime to help with the investigation. Hermione's strength and the good people around her helped me realise how someone could recover from something so terrible as what happened to her.

If you could sum up Exit, Pursued by a Bear in three words, what would they be?

The narrator did a great job

Have you listened to any of Jorjeana Marie’s other performances before? How does this one compare?

Let me just say this is my first review

Even if you care nothing about cheering you will still enjoy this book. Very moving.

YA reality at its best

I loved this book. It overturns multiple YA stereotypes and features a believable heroine who refuses to be portrayed as a victim. I kept dreading that the author was going to turn moralistic or sentimental in dealing with this challenging subject, but she (I assume it's a "she") didn't let me down, and I was cheering all the way to the end for Hermione and her wonderful friends. This is the kind of fiction I want my daughter to read. The narration is perfect and allowed me to seamlessly appreciate the emotional content of the story.

YA not a cross over for an adult

Predictable, to be fair only got through a few chapters, did not see point in continuing.

I thought it would be interested in it but no thank you. So I tried

It was a quick story which I liked and I also liked the ending a lot.

Beautiful in so many ways. Wonderfully written and narrated. I want to listen to it again, and I just finished it. Moving and inspirational, had me cheering out loud and gasping in shock. My personal favorite.

it was really sad reading about a girl who was doing so well and life was just starting to go through a rape and to not even remember it. but the truth is that it happens to a lot. this was really a good book and i would definitely recommend it

Nice story and great characters, but except for the names and some quotes it doesn't have much to do with the story of The Winter's Tale. I really loved the girl empowerment theme, so I still enjoyed it.