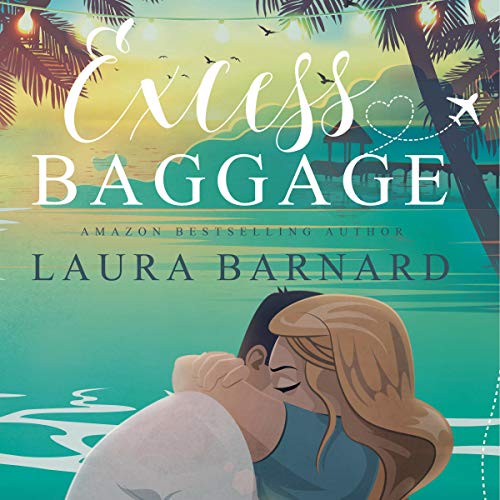 Stuck in a dead-end relationship, Erica Bennett finds herself daydreaming of her first holiday romance. She was 15, and it was exciting, new, and full of possibilities...and Jack Lawson was hot as hell. That kind of thing leaves a mark.

So when her friends suggest a girls' holiday to Luna Island, it’s exactly what she needs to take her mind off things. What she doesn’t expect is to spot Jack - a much older, hotter version of him - across the hotel lobby.

Their attraction is still there, and it isn’t long before sparks fly, but 15 years is a long time. They aren’t the same people they were back then, and besides, it’s only a week, right? Is it a second chance at something real, or will their excess baggage ruin their shot at love after they leave Luna Island?

Evelyn was such a buzzkill for Erica and she really irked me. They went to have fun, not to be chaperoned by the voice of doom and gloom! Maybe Evelyn needs a man or she's jealous!! The angst and tension between Jack and Erica had me on tenterhooks waiting for a positive outcome. I think I may have an ulcer from angsting over these two and hoping they'd get it right. The author delivers in spades! Wild, zany,
funny book you must read/listen to. I voluntarily listened to a free copy of this and am giving an honest review. The narrator did a great job.

I adored Excess Baggage! Erica is daydreaming about her a romantic holiday when she was 15 and who happens to be across the lobby? Jack,... from 15 years ago. We jump right into a very steam pool scene and it just continues to get hotter as the story progresses.

Okay, now that is out of the way, Erica is an absolute hoot. Everything adventure they go on, she comes out of it with some sort of mishap. Most of the time it involves her bathing suit. She really made the book very funny. I can't imagine all thing that happened to her every time she step out to have fun. She just rolled with it. I am seeing a lot of white bathing suits in the stores this year and I just find myself laughing as I think of Erica. She is too funny.

What will become of Erica and Jack after 15 years? What happens when Erica's boyfriend (whom she broke up with over text) shows up on Luna Island with a ring? I can't spoil it for you.

This was a quick and very satisfying story.
It amazes me how people get their wires crossed and misinterpret things all the while being completely funny.
Laura Barnard writes the best self deprecating characters, and they are thoroughly entertaining too.
Erica and Jack... with their history, the obvious passion and electricity between them, will they finally get things sorted out?....I’m not telling... you’ll just have to listen (narrated extremely well by Penny Scott-Andrews) yourself to find out!
Brilliant!

However, listening to the story highlights the things I didn't like when reading the book. Primarily the push/pull for a ridiculous reason and the too quick ending. I'm sure this is my age and people in their 20s or 30s will relate more with the characters' dilemma. I feel like a sit down and conversation makes more sense then avoiding happiness for something blown out of proportion. I'm not trying to imply that the book isn't worth reading because it is. It is worth your time and the audio is well done.

The story is cute but typical. The narrator's voice was anoying to me. She flowed well but her tone is grating. This is a basic 2nd chance book but I'm glad I took the time to listen.

4.5 Stars for Audio Review of Excess Baggage
I have read a few books by Laura Barnard but as I’m fairly new to Audio books Penny Scott-Andrews the narrator is new to me.
Excess Baggage is a second chance romance mixed with some hilarious laugh out loud moments especially the scene at the Water Park. Erica Bennett is away on a trip with her girlfriends and the last person she expects to bump into is Jack Lawson the man who broke her heart. First loves are always special and for Erica and Jack it seems nothing has changed over time, the attraction and chemistry are still there so with the help of some interfering girlfriends life starts to heat up once again for this couple who fate has given a second chance at love to.
Sizzling chemistry, witty banter, great friends and a entertaining plot all added up to make Excess Baggage an enjoyable fun listen.
The narrator did a great job with so many characters to portray.

This is a second chance at love story and although I have read several books form Laura Barnard, the narrator Penny Scott-Andrews is new to me.
This is not a particularly long book to listen to and although I enjoyed the story line I could not get into the narrator at all.
A girls trip away leads Erica Bennett to a blast from the past, when she comes face to face with her first love Jack Lawson, the man who broke her heart. However, the attraction is still there and now all that needs to be considered is whether they should act on it since nothing has really changed from when they were 15.
The chemistry between Erica and Jack is intense and thanks to their interfering friends life becomes complicated. I really enjoyed the camaraderie with the secondary characters who were entertaining.
Can Erica and Jack, get through the emotional baggage from their past and in doing so create a future or should they quit while they are ahead?

Sweet audible that will make you smile and laugh

Erica is stuck in a relationship she doesn't want and when her friends tell her they should all go for a getaway Erica agrees. What Erica didn't plan on was seeing her first love there Jack. Erica met Jack when she was 15 her first love and heartache and now there both grown up! Will they reconnect or will Jack and Erica make it a just a getaway romance since they both have separate lives? Will they both tell each other how they feel? Great second hilarious chance romance that will have you laughing and swooning at the same time. Plus the narrator made the story come to life! 4/5 stars

This is a great second chance, vacation romance. This is the story of Erica and Jack. They had a fling on vacation as teenagers. Their relationship ended up in heartbreak. Years later they are both adults and moved on with their lives. By chance they are on vacation at the same place. The feelings they both tried to forget resurface. There are complications of course. It was a fun story to follow. I wanted these two together so bad. I am a sucker for second chance romances. Jack had me swooning for sure. I loved Erica. She was fun and I could relate to her inner turmoils. The supporting characters were also fun, the friends with them on vacation. I would love to see another book with these characters. Narrator Penny Scott-Andrews does a great job telling the story to the listener. I loved her voice and she was a perfect Erica. Even when she reads Jack's parts I heard Jack as a male not a female. This is a great read/listen that will become a quick favorite.

Erica and Jack fell in love as teenagers but being teenagers it was hard to maintain a long distance relationship. They broke up. Fast forward fifteen years and Erica is on vacation with her girlfriends. Who appears at the same hotel? Jack. Her first love. The one that got away. The one who broke her heart and made her feel unworthy for a long time. What follows is a hilarious (on Erica's part) story of the same chemistry that they had as kids and fighting the attraction but at the same time not. Will it work out this time? Can they make it work?
This is a sweet 'short' second chance romance that will crack you up and also make you facepalm yourself at Erica's unfortunate happenings. I highly recommend.
Penny Scott-Andrews does an amazing job bringing to life all the characters and I'm going to keep her on my watchlist.