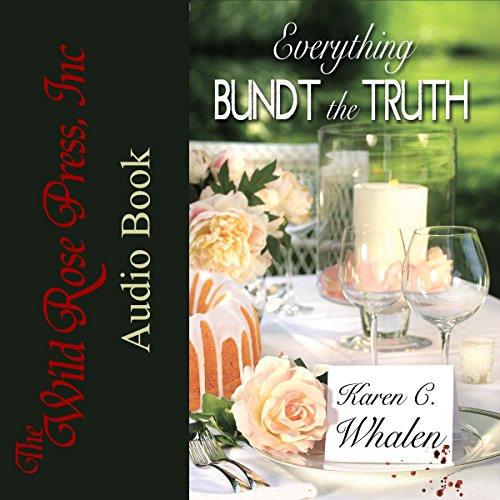 Everything Bundt the Truth

Recent widow Jane Marsh is determined to recapture a rich, full life. She strives for youthful fun by riding a bicycle downtown on her lunch hour in a suit and heels, smoking cigars, eating at hipster restaurants, and re-entering the dating scene, even if her dates prove to be peculiar.

Her most fervent desire, though, is to join an exclusive dinner club. She auditions, but is barred when her housekeeper is found murdered, and she and her guest list become the suspect list. Her, a killer? So what if her two late husbands died under suspicious circumstances. It doesn't make her a killer.

Having passed off a store bought Bundt cake as her own creation, she may have committed a culinary crime, but never murder!

This book had a decent story line, What happens when you are having a dinner party and the housekeeper you just hired is murdered in you basement ,, You decide to find the murderer yourself. I was not sure when i first started reading but as the story went on i really enjoyed, I was surprised at who killer was, The only complaint i have is the narrator, She was not bad but i feel she needed make more distinction with the voices for each character, Sometime i was not sure which one she was doing,

The big twist with this book is that the main character Jane is a widow, having two husbands who died under mysterious circumstances. So the whole book I kept questioning her motives. Her shady past was in stark contrast with her current persona which is deeply religious and kind. It was an interesting yin & yang which I found very unique.

However, I found that in some ways the story moved so quickly that it felt unrealistic & rushed. For example Jane goes on a blind date, stops by a pet store and on a whim adopts two dogs with 5 minutes of seeing them. She brings the dogs home who instantly go to sleep that night & settle in with no work whatsoever. It was so unrealistic that it took me out of the story. Anyone who has adopted a dog (let alone two at once) know it’s not something which works that way. Another example is when one of Jane’s sons meets a girl & marries her after like 3 dates. Then the daughter in law starts calling Jane “mom” within an hour of meeting her. It’s not sweet, it’s weird and inauthentic. These are just a few examples, but I wish more effort was put into being realistic and not so rushed.

The mystery itself was interesting & fun to follow. It offered a host of interesting & suspicious characters who kept me guessing, and it was a challenge to solve! I received this as a review copy & left my honest review

When a widow's new housekeeper winds up dead a few hours before she hosts her first dinner for an exclusive dinner club, she turns super-sleuth to try to figure out who committed the murder in this intricately plotted story that, in classic murder tradition, casts suspicion on most of the characters in the book at one time or another.
New pets and new daughter-in-laws provide human interest and comic relief.
Worth the listen.

Everything Bundt the Truth

Everything Bundt the Truth is a well written cozy mystery. There were enough well developed characters that it wasn't obvious to me who the murderer was. I love to be kept guessing!

Nice story if you enjoy mysteries, even included a twist at the end. I am not typically a mystery reader but I received a complimentary copy of this one in exchange for an honest review. It was a clean story and had some interesting character development.

I didn't see that coming!

I enjoyed Karen Whalen's writing. She held my attention throughout the story.

I was given a free review copy of this audiobook at my request and have voluntarily left this review.

What a great launch for a newly published author! Whalen tells a coherent, focused, and smooth story with misdirected clues that kept me guessing to the end and then I guessed wrong. The audio book has fun and engaging characters, many unusual, and chapters that are mini cliff hangers that made me continue to the next. I think a lot of people can relate to Jane’s dilemmas about how to belong, how to solve problems, and how to interact with adult children. The book reveals the way a paralegal navigates and analyzes information. The interweaving of the attractions and history of downtown Denver is also interesting. I’m anticipating the entire series: Whalen has created a somewhat offbeat world and a splendid character in Jane.

Book 1 of the Dinner Club series is fabulous!

This book has everything I love about cozy mysteries- likable and interesting characters, an intriguing cozy mystery, friendship, and a little romance! What’s not to love! Jane is a widow with 2 adult sons. She is looking for something to fill her time. Her friend Cheryl invites her to an exclusive dinner club. Jane really wants to join. Jane hosts the event but has to reschedule because there is a death ! This book will keep you guessing until the end! Very enjoyable cozy mystery! The audiobook was awesome! Well done and enjoyable! I received this audiobook from the author for an honest review.

Narration Makes It Worth Giving It A Try

Narration Makes It Worth Giving It A Try, but story line is a bit dull, I was provided this audiobook at no charge by the author, publisher and/or narrator in exchange for an unbiased review via Audiobook Blast

Not a bad cozy, but nothing too unusual. Jane's new housekeeper is killed while she is out. She is trying to get into a pretentious little dinner club and due to the murder her approval for membership in to the club is delayed. She takes it upon herself to investigate and figure it out on her own. She isn't the brightest crayon in the box but its entertaining enough. The author doses a nice job but she does have a very soft lulling voice so it was hard to stay awake on the commutes where I was more tired. I would consider listening to more in the series. FYI it does have a religious undertone, it's not my thing but it wasn't overly obnoxious or preachy. I received a free review copy of this book at my request and have voluntarily let this review.