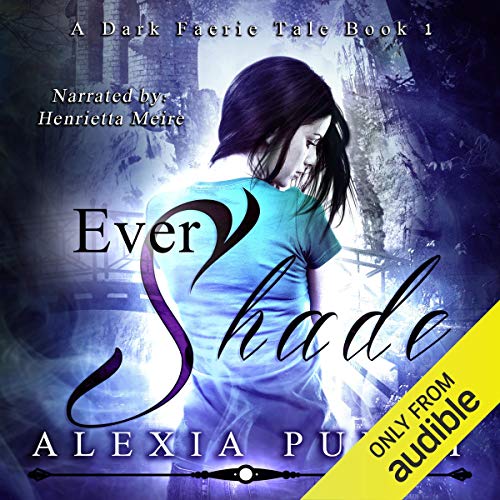 Ever Shade - A dark twist on faeries.

For Shade, a chance meeting with a powerful Teleen faery warrior who wields electrical currents and blue fires along his skin, has her joining him on a treacherous mission for the good Seelie Faerie Court across the land of Faerie. Magic and malice abound and nothing is what it really seems to be. The evil Unseelie Queen and her treacherous allies are around every corner as Shade makes her way across the breathtaking landscapes of the world of Faerie, which exists alongside the mundane human world. Shade discovers her own uncharted magic and meets some of the most powerful warriors in Faerie while battling evil dryads, conniving Teleen guards and challenges on her life with every step in a world where nothing can be taken for granted.

Excellent fit for the part.

I have yet to be disappointed by anything written by Alexia Purdy!

What did you love best about Ever Shade?

I loved how the Author paints you a vision with her incredible writing skills. You can feel every emotion, picture every detail like you are right there. The Characters well, they are simple spectacular and original. This is not your everyday Fae story.

What was one of the most memorable moments of Ever Shade?

When Shade travels through the lands and has a run in with a unlikely enemy.

I loved the magic and world created in this YA dark faerie tale. High school student, Shade, thought she was human until she met Jack, a Teleen faerie who pulls her into a world she never knew existed. She discovers things about herself that she had no inclination of, and is then persuaded to join a dangerous mission to try to save the Seelie faerie court from been overtaken by the evil Unseelie queen. I enjoyed the development of Shade in this story from an introverted high school student to a physically stronger, more determined person who is becoming aware of her true nature. The slow build up of friendships with hints of potential romance and sexual attraction throughout the book was great and I will look forward to seeing what develops in the next book. I thought the narrator did a great job of bringing the story to life and I loved the various accents she used for the characters, it definitely added to my enjoyment of the audiobook. This is a fast paced, well written adventure story with great twists, imagery and descriptions. The characters capture your imagination and you look forward to learning more about them all in future books.

omg what a ride

take me to the land of farefolk and I will want to stay. this is a gem of a story and I am excited to read/hear what comes next

This book, while not being the most original or complex one out there, was entertaining. The narration is well done, and held my interest throughout. Like I said, the story is not very complex, and you have to suspend your disbelief some, but it's not a bad book. All in all, I was entertained, so that's good enough for me.

loved it. its fast paced and really pulled me in!
if you enjoy fairies, and dark fae you'll enjoy it.

I just get lost in this series! All of the characters are interesting and relatable.

I'm giving this book three stars because it was a mistake for me to buy it. I thought the characters and plot would be more mature.

Pick a word that means TERRIBLE, but isn't so mean

This book should be in the kids genre. Like the 10 - 13 age range. Maybe that would help make sense of what I just listened to.

Within the first 10 minutes of the book, the lead character meets a stranger in an abandoned building and decides to go with him into the woods. ALONE. AT NIGHT. TO ANOTHER WORLD.... this should have set the alarm off for me then but I give everything a chance.

There was no build up, story building, no world building. Things just happened.

That's exactly how it happened. You don't get any development. I wouldn't recommend this at all nor will I continue the series.

Love the narrators voice. Soothing.
But I don't like the way she does the main characters voice. She makes Shade sound like a complete nerd. Idk why she does that with all the English accents. Her Irish and other accents are wonderful.