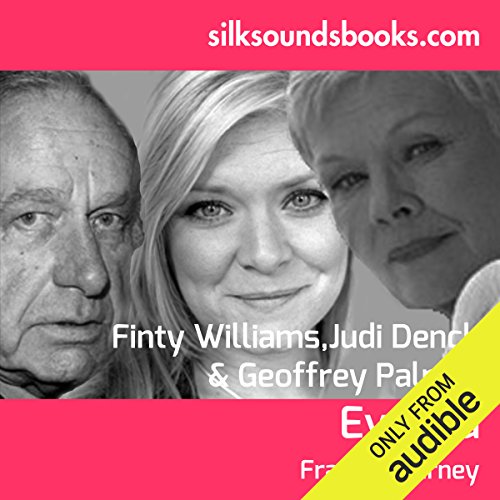 Fanny Burney's wickedly funny satire follows the trials and romantic adventures of the young and beautiful Evelina as she tries to make her way through 18th-century Britain handicapped by her three great problems: being poor, being illegitimate - and being a girl.

Evelina was a raging best seller when it was first published in 1778 and is widely credited with being the first of the great British domestic novels. Burney was a direct influence on her immediate follower, Jane Austen, who used some of the final lines from Burney’s novel Cecilia for one of her own fairly successful novels: "...if to pride and prejudice you owe your miseries...to pride and prejudice you will also owe their termination".

I decided to get this version of Evelina due to the poor reviews that the other recording receives from Audible UK listeners. It was a good choice! Make sure to listen to the audio samples of both. The cast here is fantastic.

Evelina is a charming novel with some unforgettable comedic moments. Now if only Audible would also record Cecilia & Camilla!

This was an amazingly complex witty and astonishingly relatable considering the time period. No one could have performed the innocence of Evelina as well as Finty Williams. Not to mention the way she captured the secondary and tertiary characters. I relished in the romantic diction of this book!

The Trifling Production of a Few Idle Hours

I achieved something akin to parallax vision while listening to this book. The second perspective that made everything so 3-dimensional was Leo Damrosch’s The Club, an account of the convivial meetings of Boswell, Johnson, Burke, Gibbon, Sir Joshua Reynolds and others at the Turk’s Head Tavern in the latter third of the 18th Century. Damrosch’s social history rings true to Burney’s picture of London; conversely, Burney’s observations interlard Damrosch’s narrative at pretty regular intervals.

Not that it required supplementary reading to render this novel enjoyable. What, in her dedication Burney refers to as “the trifling production of a few idle hours” is, by turns, comic and pathetic, with a cast of vivid characters whose story bestows the same sense of sanity and equilibrium one gets at the conclusion of a Jane Austen novel: the man and woman who merit each other get each other while the shallow, silly and self-centered characters just go on being shallow, silly and self-centered. To be sure, there’s more of the rough-and-tumble exuberance of 18th Century England than one meets with at Highbury or Kellynch Hall. Oaths are sworn and swords are even drawn. But along the way, we get finely-rendered observations that remind us our human nature never changes:

“…it was evident that he purposed to both charm and astonish me by his appearance: he was dressed in a very showy manner, but without any taste; and the inelegant smartness of his air and deportment, his visible struggle against education to put on the fine gentleman, added to his frequent conscious glances at a dress to which he was but little accustomed, very effectually destroyed his aim of figuring, and rendered all his efforts useless.” (Letter 50)

“I knew not, till now, how requisite are birth and fortune to the attainment of respect and civility.” (Letter 64)

And, because human nature is so immutable, the advice Burney’s characters offer for dealing with it is still as useful as ever:

“Where anything is doubtful, the ties of society, and the laws of humanity, claim a favorable interpretation; but remember, my dear child, that those of discretion have an equal claim to your regard.” (Letter 49)

“…certain it is, that the prevalence of fashion makes the greatest absurdities pass uncensured, and the mind naturally accommodates itself even to the most ridiculous improprieties, if they occur frequently." (Letter 65)

As these excerpts suggest, one must attune one’s ears to the cadences (and distances) of 18th Century sentences. But the rewards are well worth the effort. Of the two recordings available through Audible, I chose this one for its cast. Years of British television have made Judy Dench and Geoffrey Howard favorites in our home. And our kids grew up watching Angelina Ballerina, voiced by Dench’s daughter, Finty Williams. All are superb but, unless Geoffrey Howard could do more with his voice than I suspect, the actor who voices the letters of Lord Willoughby and Mr. Macartney goes uncredited.

What great fun to go back in time in England

First I must comment on the great narration! The only one of the trio I was not familiar with was Flinty Williams who did a marvelous job as Evelina as a young woman!

The book, I believe, is set during the regency period. At that time people wrote many letters often of some length. That is the means via which our story is moved.

Our heroine, Evelina, has been raised in the country by a parson in who's care her dying mother entrusted. She is well educated by him and, we learn, very comely though very innocent as she enters London's society.

I found the novel to be more a coming of age story than a love one. If you are interested in the times and manners of the period, as well as how people wrote and spoke, you should find this story most enlightening and enjoyable.

A period piece.. Flowery and sophisticated use of the mores and morals of the time. One wonders that human communication at one time had such a rule bound and structured manner, as well as behaviors. A bit long. One wishes Evelina could have surpassed her challenges with a little less digression. Poor girl makes good.

Excellent reading. One needs a lot of patience with this book, which is understandable bearing in mind the century it was written.

This is the best version!

This is the best performance. I very much enjoyed the story. I can see why Frances Burney inspired Jane Austen and there is at least one phrase (pertaining to a woman's reputation) that is identical to one used in Pride And Prejudice. Burney has the same sarcastic wit as Austen, which had me laughing out loud at times. Frances Burney is my new favorite author.

The narration is quite strong. I'll say that the values driving the narrative are dated to an alienating degree, leaving the novel interesting for people with a historical interest in the novel. On its own, outside of scholarly interest, it's fine? It's nowhere near the level of Udolpho or even Old Manir House, largely because Evelina herself is generally cowardly.

This novel was much more complex than I was expecting. It reminds me, a little bit, of some of the films of David Lynch, maybe, or Paul Verhoeven, that assume a form and a tone that are at odds with their real intent. The end of the novel contains some scenes that could easily be read as merely, and ridiculously, sentimental, but given that the entire novel has been *about* different forms of entertainment, and scenes from many different kinds of entertainment (farce, melodrama, cruel and disturbing practical jokes, etc) have been repeatedly “intruding into the text” as if from some other work of art, the reader should really be on guard by the time a pathetic scene of sentimentality joins them. I think the author is up to something much more sophisticated than might first appear.

The performances are generally good. Geoffrey Palmer is excellent as Mr. Villars. Judi Dench is good but unremarkable (she has only a tiny handful of appearances). I’m going to depart from the opinion of all the other reviewers by saying that Finty Williams is...often good, but not consistently. She has the job of carrying the vast bulk of the narration, and her range does not seem always up to the task. She is often very successful in representing the many different voices in the narrative: her Captain Mervin and Madame Duval are certainly good, but several others seem less well done, for example, Mrs. Selwyn’s voice is not very consistent. Also, and perhaps more seriously, her reading sometimes seems to mistake the meanings of some sentences, miss crucial emphases, etc. But perhaps I am being overly critical. (And probably she is better than the other Evelinas available, whom I have not listened to.)

There are a number of obvious misreadings, unfortunately—I mean, words on the page are read out as other words. Artfulness instead of artlessness, impudence instead of imprudence, etc. (The errors are obvious from context. Mr Villars would never speak of the “artfulness” of Evelina’s nature.) Perhaps the actors were working from a not very well proofread script? Whoever produced this recording wasn’t always paying attention, it seems.

Overall, I recommend this, especially if you are familiar with the novels of Jane Austen. Not because this is similar to an Austen novel--it is very different! If nothing else, it's interesting to get to know the novels that Austen read, admired, was influenced by, and reacted to. Austen certainly read and was influenced by Burney. She acknowledged as much by naming the artful seducer of Sense and Sensibility (John Willoughby) after the artful would-be seducer of this novel (Sir Clement Willoughby), for example. (And it's also really interesting to compare some of Willoughby's final conversation with Elinor in S&S with some of the language in this novel: Marianne Dashwood would apparently find much of the language in Evelina hackneyed and risible. Thunderbolts and daggers!)

Great for Fans of Jane Austen!

I had intended to listen to this book little by little over a couple of weeks, but found myself engrossed in the story and finished it in just a few days. While this was assigned to me, i think it would be enjoyable to any fans of Jane Austen. Evelina, of course, predates any of Austen’s writing by several decades but hasn’t enjoyed the lasting fame that Austen’s novels have. Having read a number of novels from the 18th Century, it’s usually pretty clear to me why some stories don’t enjoy lasting fame, so Evelina surprised me with its interesting characters who range from lovable to genuinely frustrating. The plot, too, was intriguing. While the story ended as I wanted it to, the details and twists along the way added to the satisfaction (rather than proving boring or like an obstacle between me and the conclusion).
This performance was well done. Often, I’m not a fan of multi-cast audiobooks, but it works well for epistolary novels. Each reader performed their part skillfully, particularly Finty Williams who had, in addition to the voice of Evelina, to supply the voices of various characters that Evelina writes about.
Overall, I’m very happy with this audiobook and happily recommend it to others!