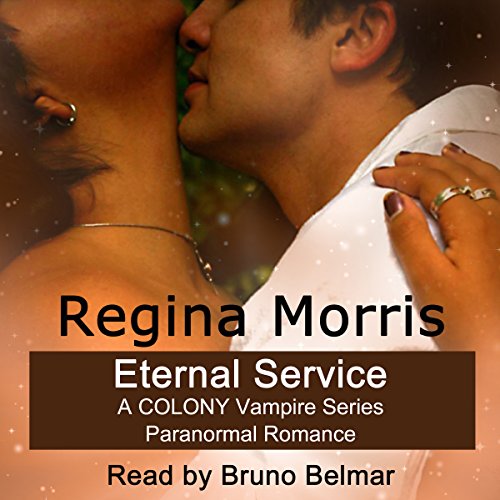 If you're looking for suspenseful and sensual vampire romances, this is the series for you!

Vampires exist among us. They can be your neighbor, your best friend, a teacher for your child, etc. They alter their aged appearance based upon the amount of blood they consume. They move to a new area, drink a lot of blood, and appear young. Slowly they limit their intake of blood and age, right in front of our unsuspecting eyes. After decades, they fake their death, move, and do it over and over again. Most live quiet lives in an effort to blend in. Some however want power and control.

The Colony is an elite group of vampires sworn to protect the president of the United States from these rogue vampires.

The Colony Series is a suspenseful and sensual vampire fiction series that has earned five-star reviews from fans of some of the best paranormal romance series like Love at Stake, the Argeneau series, and the Black Dagger Brotherhood.

When Raymond Metcalf, vampire coven master of the Colony, teams up with a federal operative of the human female persuasion - who has no idea that vampires even exist - will his mission or his heart be compromised first?

Career military woman, Alex Brennan, is being offered the promotion of a lifetime and with it a romance that she has desperately been seeking. Does she dare accept the position as Director of the Colony, an elite group of deadly creatures of the night and risk a dangerous romance with a man who is not even human?

Together, can they save the president?

This novel is for individuals 18+ years of age as it contains sexual content. It is a light-hearted (non-dark) romance and should not be considered a political thriller. Although there are references to the president, Washington, D.C., and the White House, which add suspense to the romance, they are merely backdrop scenery to the romance.

The Narrator was a wrong choice.

Potential with story , but respectfully, the Narrator would fare better with children's books.Returned.

WTF what the hell is wrong with the author giving permission to have this man read this book.he reads straight he doesn't throw in the way of how a person talks it's just all straight no stopping to change the voice or anything like that it is all the same straight talkin it is and I quote outrageously blunt. please whatever you do do not let the person reading this book ever read another book for people to listen to it sucked. I change my mind I said that wrong he sucks at reading this book!!!
thank you

The story was coming along and all of a sudden it was wrapped up and over. seemed a bit rushed. very disappointed.

Cute story of a group of vampire special agents that protect the president of united states. Each member has a story and the new leader (human anglo female) gets to know her crew and falls for the lead vamp. Nice story with action and drama. Worth a credit or money if you are a paranormal fan