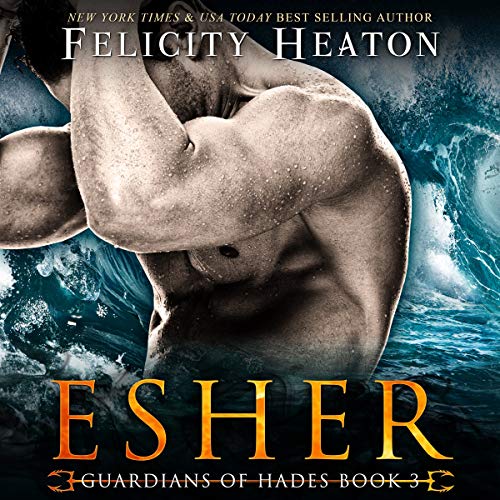 Prince of the Underworld and Lord of Water, Esher was banished from his home by his father, Hades, two centuries ago and given a new duty and purpose - to keep our world and his from colliding in a calamity foreseen by the Moirai.

Together with his six brothers, he fights to defend the gates to the Underworld from daemons bent on breaching them and gaining entrance to that forbidden land, striving to protect his home from their dark influence. Tormented by his past, Esher burns with hatred towards mortals and bears a grudge against Hades for forcing him into their world, condemning him to a life of battling to keep a fragile hold on his darker side - a side that wants to kill every human in the name of revenge.

Until he finds himself stepping in to save a female - a beautiful mortal filled with light and laughter who draws him to her as fiercely as the pull of the moon, stirring conflict in his heart and rousing dangerous needs long forgotten.

Aiko knows from the moment she sets eyes on the black-haired warrior that he is no ordinary man, just as she's no ordinary woman. Blessed with a gift, she can see through his stormy façade to the powerful god beneath, and the pain and darkness that beats inside him - pain she grows determined to heal as she falls deeper under his spell and into his world.

When the daemon bent on turning Esher against his brothers makes her move, will Esher find the strength to overcome his past and fulfil his duty, or will the lure of revenge allow the darkness in his heart to seize control, transforming him into a god intent on destroying the world?

The characters in this series were so realistic, and believable. The author did such a great job of humanizing the gods, and enabling them to find that perfect mate. She was able to clearly show that to be immortal, powerful, rich, and handsome means nothing if you have to live alone for centuries. I eagerly await the publication of future books in this series, because there is truly some awesome stories just waiting to be born.

I struggled to finish the series. the author uses the Expression "Gods" at least once on every page. it was distracting and annoying. It ruined the story due to annoyance

need next book...I'm on my seat

awesome books so far, cant wait for next book in series. great characters and story lines.