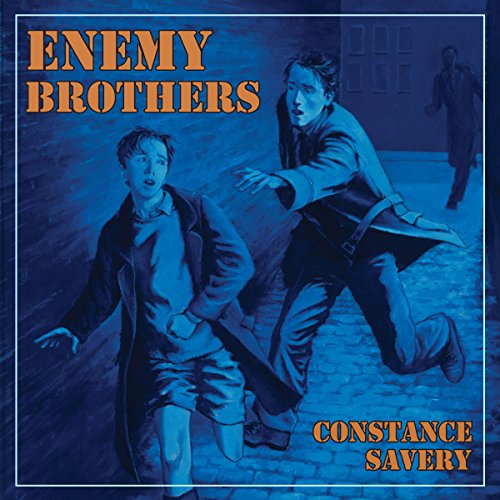 British airman Dym Ingleford is convinced that the young German prisoner, Max Eckermann, is his brother Anthony, who was kidnapped years before. Raised in the Nazi ideology, Tony has by chance tumbled into British hands.

Dym has brought him back, at least temporarily, to the family he neither remembers nor will acknowledge as his own. As Tony keeps attempting to escape, his stubborn anger is whittled away by the patient kindness he finds at the White Priory. Then, just as he is resigning himself to stay with this English family, a new chance suddenly opens for him to return home - to Germany!

I had never heard of “Enemy Brothers” or its author, Constance Savery, until one of my writer friends recommended it to me. It looked interesting and I like historical fiction, but with it being labeled as a children’s book, it sat on my want to read list for several months before I tried to find it. Once again, I feel the need to kick myself for being judgmental because this is yet another children’s book that is great for all ages!

I don’t want to say so much about it that I give away spoilers because this is a great story to go into blind and feel all the feels as they come. How about I use a synopsis as a jumping off point: This is a story about a young German prisoner named Max Eckermann, who gets captured by British airmen. One of those airmen, Dym Ingleford, believes “Max” may actually be Tony, Dym’s baby brother who was kidnapped years ago, never to be seen again except in the occasional photo mailed to their family by the guilt-ridden kidnapper (hence the reason they know what he looks like). We see the majority of the events in the book from Max/Tony’s perspective as he and the reader discover the truth about his identity.

It was interesting to see this story from the perspective of a young boy who was raised in the Nazi ideology as he dealt with being made to live in an English home with people who claimed to be his real family. I thought the way his reactions to things were portrayed was very realistic and even understandable, in a way. I mean, how would YOU feel if you were a young child taken away from the place you thought was your home and told everything you ever knew, from your heritage to your ideology, was a lie? I think you’d behave much the way Max/Tony did, with anger, confusion, and rebellion! Even with Max/Tony acting out the way he did, I never disliked him. Again, this was because his behavior was realistic and understandable. By the end of the book, I actually did find him likable.

Speaking of likable characters, Dym was wonderful too. He was so patient and kind, no matter Max/Tony did, but he wasn’t a pushover. He set limits for the boy and as such, was someone Max/Tony could respect whether they turned out to truly be brothers or not. (See how vague I’m trying to be in how I word things? :P)

The rest of the family, while not quite so patient as Dym, were interesting characters too, and I think Constance Savery did an excellent job making them distinct individuals and also showing creating realistic relationship dynamics.

Another thing I liked that I wasn’t expecting were the subtle themes of discerning and choosing between truth and lies, and good overcoming evil. It seems so many children’s books these days have a big fat MORAL that the entire story revolves around, and if you miss that MORAL you must be blind. Now, I’m not saying it’s a bad thing to have morals in stories. Quite the opposite, I think most stories have a moral of some kind hidden within them no matter what. But there’s something to be said for the art of subtlety and a story that can convey an important truth without making it so blatantly obvious that you feel like the author is standing over your shoulder explaining something to you that he or she thought was important. Kids aren’t stupid, they can pick up on themes in a story without needing things to be dumbed down and made obvious for them, and I think Constance Savery did well by allowing these themes to occur naturally instead of forcing them on the story. This kind of writing creates a timeless book that can be read and enjoyed by people of all ages.

In addition, the narrator's performance was excellent. I have no complaints.

This was one of those books that I enjoyed so much that I will be seeking out a physical copy of my own so I can read and enjoy it again and again. I recommend it to everyone reading this review!

Content Advisory for those who want to know: There is no swearing or sexual content in this book. It is set in England during World War II, however, and so there are naturally mentions of war violence from time to time, but none of it is intense or graphically described. At least once we hear that someone the Ingleford family knew was killed in the war, but the means of their death is not described. However, this person was someone Max/Tony had met and come to (begrudgingly) like, so he is a little sad at the news. While our main characters are occasionally in peril, this peril is never particularly intense and sometimes we only hear about it after the fact.

A certain character repeatedly runs away and sometimes needs to be physically caught, restrained, and brought back. One time, this character panics and, without thinking, bites the individual who caught him, but this wound is not graphically described and the individual simply gets it bandaged and is fine. A certain character gets shot in the shoulder during a machine gun attack, but we only hear about it after the fact and the wound is not described

Sensitive uplifting story written by a heart who has known true joy through suffering and loss.

This was one the most precious stories I have ever read with my sons. We all loved it.