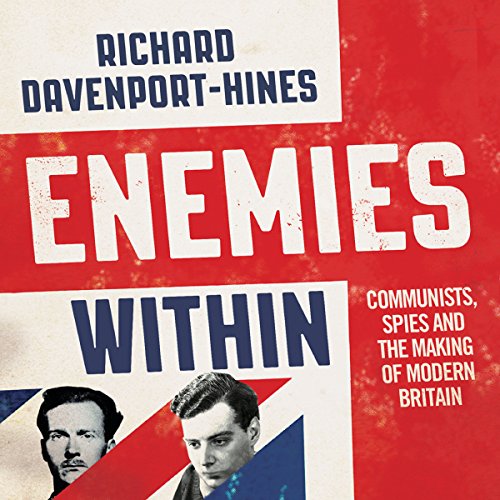 Enemies Within: Communists, Spies and the Making of Modern Britain

What pushed Blunt, Burgess, Cairncross, Maclean and Philby into Soviet hands?
With access to recently released papers and other neglected documents, this sharp analysis of the intelligence world examines how and why these men and others betrayed their country and what this cost Britain and its allies.

'Historians fumble their catches when they study individuals' motives and ideas rather than the institutions in which people work, respond, find motivation and develop their ideas', writes Richard Davenport-Hines in his history of the men who were persuaded by the Soviet Union to betray their country.

In an audiobook which attempts to counter many contradictory accounts, Enemies Within offers a study of character: both individual and institutional - the operative traits of boarding schools, the universities of Oxford and Cambridge, the Intelligence Division, the Foreign Office, MI5, MI6 and Moscow Centre.

The audiobook refuses to present the Cambridge spies as they wished to be seen, in Marxist terms. It argues that these five men did their greatest harm to Britain not from their clandestine espionage but in their propaganda victories enjoyed from Moscow after 1951. Notions of trust, abused trust, forfeited trust and mistrust from the late 19th century to perestroika pepper its narrative.

In an audiobook that is as intellectually thrilling as it is entertaining and illuminating, Davenport-Hines charts how the undermining of authority, the rejection of expertise and the suspicion of educational advantages began with the Cambridge Five and has transformed the social and political temper of Britain.

"Succinct, lively and well-written biography...Done with great panache, in a volume that will introduce Keynes and his strange world to a new generation of readers." ( Evening Standard)
"An amusing, elegant and provocative writer ...great fun. By focusing on Keynes as a private man and public figure rather than an academic economist, it is possible to see him as the last and greatest flowering of Edwardian Liberalism." ( Sunday Times)
"Daringly but sensibly, this renowned biographer, Davenport-Hines, has studied Keynes from seven points of view - not one of them as an economist...a rewarding and fascinating book." ( Daily Mail)