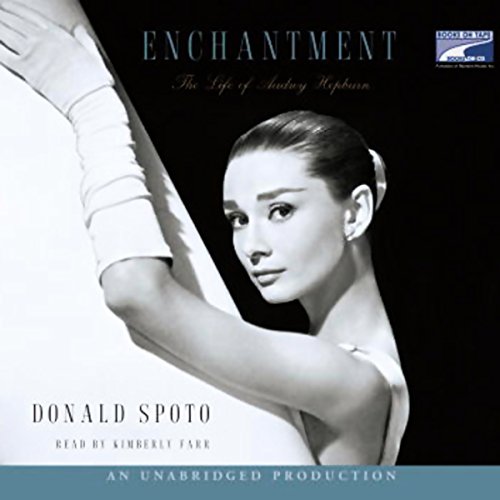 Her name is synonymous with elegance, style, and grace. Over the course of her extraordinary life and career, Audrey Hepburn captured hearts around the world and created a public image that stands as one of the most recognizable and beloved in recent memory. But despite her international fame and her tireless efforts on behalf of UNICEF, Audrey was also known for her intense privacy. With unprecedented access to studio archives, friends, and colleagues who knew and loved her, best-selling author Donald Spoto provides an intimate and moving account of this beautiful, elusive, and talented woman.

Tracing her astonishing rise to stardom, from her harrowing childhood in Nazi-controlled Holland during World War II to her years as a struggling ballet dancer in London and her Tony Award-winning Broadway debut in Gigi, Spoto illuminates the origins of Audrey's tenacious spirit and fiercely passionate nature.

She would go on to star in some of the most popular movies of the 20th century, including Roman Holiday, Sabrina, Funny Face, The Nun's Story, Breakfast at Tiffany's, and My Fair Lady. A friend and inspiration to renowned designer Hubert de Givenchy, Audrey emerged as a fashion icon as well as a film legend. Her influence on women's fashion is unparalleled to this day.

But behind the glamorous public persona, Audrey Hepburn was both a different and a deeper person, and a woman who craved love and affection. Donald Spoto offers remarkable insights into her professional and personal relationships with her two husbands and with such celebrities as Gregory Peck, William Holden, Fred Astaire, Gary Cooper, Robert Anderson, Cary Grant, Peter O'Toole, Albert Finney, and Ben Gazzara.

"Spoto digs beneath the surface, giving readers strong images of both actress and woman, and he does so in way that is, like Audrey Hepburn, quite elegant." ( Booklist)

This one was hard to put down! I was interested in Audrey because of her performance in My Fair Lady and Breakfast at Tiffany's. However, I was unprepared for how interesting the first 15 years of her life were. I felt like I got my money's worth before she even became a screen star.

The stories behind many of the films are very interesting as well as her devotion to UNICEF in her later life. There are indeed some VERY moving moments in this book.

I was amazed at how "normal" Audrey was in real life and her ability to walk away from her career to be a mother and homemaker. It also seems that the current crop of Hollywood stars could take a few cues from Audrey's apparent lack of arrogance on and off the set.

The only criticisms (and not enough to warrent less than a 5 star rating) were that the author tended to place the blame on her 2 failed marriages on her husbands, while glossing over the fact that she also had numerous romances while married. The second is that I would have preferred a little bit more about her relationships with the other actors (especially Rex Harrison) in My Fair Lady. There was a good deal of information about Marni Nixon's overdubbing of the vocals for the musical (which was great), but more could have been said on this great film.

However, these are small issues in the overall scheme of the book. I liked it so well, I bought the paperback and gave it as a gift to some friends (and that was before I even finished the book).

Highly recommend this one!

I just love her story and there is so much I didn't know! Balanced piece read by a nice voice.

Audrey The Lady as ever.

This is a great book if you are interested in the life of Audrey Hepburn.
It is clear, concise and ordered. The book is a historical time line of things that happened in her life and her career.

This is great book to get if you are interested in some of the back story of her life.
(You learn things about this remarkable lady that are not common knowledge)

The narrator is beyond good as she unfolds a compelling look at one of the truly great people of the last century. She doesn't drag the text nor is she too fast.
I have been through this book a few times, and am satisfied with listening.

Well worth the money if you are looking for a peek into Audrey" life.

What made the experience of listening to Enchantment the most enjoyable?

I have always adored Audrey Hepburn; her style, grace and movies. However, I did not really know who she was and all she had been through until this book. There were many enjoyable parts in the book, but there were also many sad, heart-wrenching parts as well.

What was one of the most memorable moments of Enchantment?

There were so many; her Oscar win for Roman Holiday, her strained, cold relationship with her mother, her not-so-happy marriages, the struggles endured for the birth of her 2 children, and her life-long friendships.

Kimberly's voice was very soothing and pleasant to listen to.

Amazing story of an amazing woman

I was always entranced by Audrey Hepburn as I was growing up in the 50's. She was the ultimate in style and grace. To find out now of her life's hardships and triumphs just puts her miles ahead of anyone else from the era that was in show business.

The life that Audrey led as a child is unbelievable.
Her life during the WWII, taught me so much about what people endured with the German invasions. And then the rest of Audrey's story of overcoming her early years is incredible.

What disappointed you about Enchantment?

The first book I read by this author was very exciting. I was impressed by his extensive research, how he showed the reader a complete woman (I refer to Spoto's book about Marilyn Monroe, which I read in 2001), how she became who she was, not demonizing nor lionizing her, just sharing a story.
I did not know much about Audrey Hepburn, and I still don't. Mr Spoto seemed more interested in telling excruciatingly lengthy tales and piles of facts about people who have the slightest connection to the subject. He repeats descriptions of Audrey, using the exact same words ("why did people insist on calling her a "sprite"? Here is a long description of what a "sprite" really is", and then half a dozen other words and why they were stupidly used) , which I found odd.
Her second marriage was given about a minute in the book, and since I have read several Spoto books, that usually means he probably didn't like Dotti very well. :) I know nothing about her second child, which again is odd since she suffered so many miscarriages, one would think he would be a very present part of her life. But not in this book.

I think I will go back to Fiction for audio books. They are a great help during my excruciating migraines, when I cannot get out of bed and am terribly bored.

Mispronunciations! Why dont readers make sure they read through and ask about words they are not sure about?? At first I thought she was very skilled at speaking the names of places outside of the US in the accent of that place - until I realized that she sort of made every place sound very French... and then she committed the cardinal sin.... she called "Gstaad", which is pronounced "Shtaad" (I learned this from Princess Grace and never forgot!) ... she called it "Ga-shtad".
This made me question other pronunciations.
On the PLUS side - she did not try to sound like characters who were quoted, which I so prefer in Biographies. Just straight reading, not performing. Listening to men try to sound like Marilyn Monroe in books about her either sends me into fits of giggles or causes me to give up. I heart a fab drag queen, but it's hard to be serious about a work of non-fiction when the reader (the author in the book I am thinking of) sounds like the runner-up in the MM Drag Contest. :)

If you could play editor, what scene or scenes would you have cut from Enchantment?

Easily the sections that went on and on and on and had nothing - or very little - to do with the subject. It felt like Mr Spoto was telling me "Look how much I know!", but also that it was used to "pad" a book that I wished had more content that would help me know more about Audrey.

I would love a recommendation for a great biography about Audrey Hepburn, sadly this was just not it. I can't even make myself finish and I hung in there for 98% of the book.

I am an amateur film historian and have a pretty good library about Hollywood from 1929-1962 - the actors and actresses, the people who made the movies, the politics of the Studio System.... so I have read wonderful books and a very few that were embarrassingly bad (usually as there were no real sources, so the reader gets a lot of Just Gossip). Maybe others might like "Enchantment" - I am still not sure why he chose that name - but as a first book about a lady whose films I really like, this was just not the best start.

A Hollywood Fairytale with a Dose of Sadness

If you could sum up Enchantment in three words, what would they be?

The story of Audrey's life was told in chronological order and so it was easy to follow.

The making of the movie "The Nun's Story" on location in Africa.

I did not listen to it all in one sitting. It was easy to pick up the story as it moved along.

If you like Audrey Hepburn, you will like this audiobook. I thought that the writer managed to convey Audrey as a normal, caring and sensitive person. Although this is ultimately an uplifting true story of triumph and overcoming life's obstacles, I was surprised by the sad parts: her early life during WWII, her mother's coldness to her, the unhappy marriages, the many miscarriages she endured to have her two children, and the numerous affairs that she had while married. I enjoyed the audiobook as a whole, but the narrator's voice did tend to get on my nerves from time to time.

I love the voice of Kimberly Farr, very soothing , the story in general very informative without been boring. Great book.

Splendid story of a splendid woman

Learn the lovely, loving side to the iconic actress
Enjoyed it very much. The show biz stories great, yes, but the character of the woman, revealed, was the most satisfying.