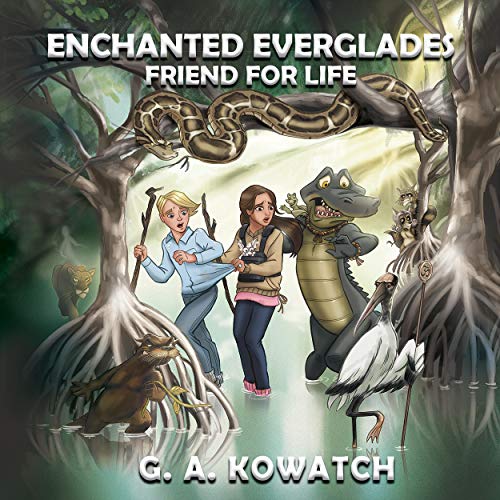 Twelve-year-old Ocean River and Ellen Hansen have been best friends since they were six. When Ocean’s immature antics at her dad’s funeral threaten to ruin their friendship forever, their parents intervene and take them on a weekend trip to the Everglades. But an airboat accident leaves Ocean and Ellen stranded and alone, and now it’s Ocean’s chance to prove he’s mature enough to save them both.

Meanwhile in the swampy jungles of the Everglades, Gumbo, an aspiring yogi alligator, encounters a deadly mutant python. Worse yet, Gumbo’s father, the king, orders him to kill several invasive pythons by the next day. The problem is Gumbo’s a vegan and a pacifist who’s deathly afraid of snakes.

The two stories converge when Ocean and Ellen receive animal superpowers from a Seminole Indian ghost, allowing them to communicate with Gumbo and his friends. Together, these misfits will have to outwit nature’s teeth and claws to stay alive before time runs out.

This is a wonderful children's book but also a great listen for adults.

Our kids loved it. Very well written by the author and the narrators have done such a great job performing and bringing the characters to life.
The story unfolds nicely and you just want to keep listening. The best thing is that the author is able to implement a message of compassion, friendship and love to the human life but also to the wild.
Great listen! Looking forward to more books of the author.