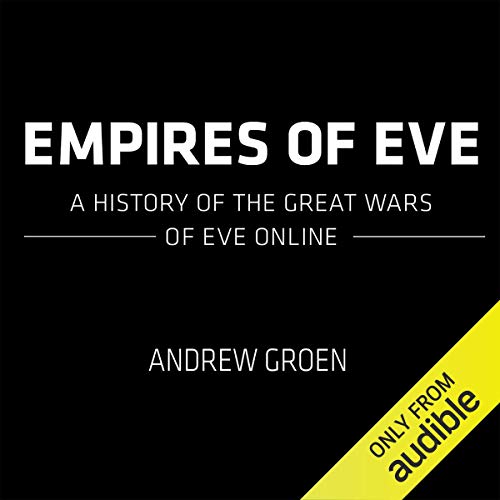 Empires of EVE: A History of the Great Wars of EVE Online is the incredible true story of the dictators and governments that have risen to power within the real virtual world of EVE Online.

Since 2003, this sci-fi virtual world has been ruled by player-led governments commanding tens of thousands of real people. The conflict and struggle for power between these diverse governments has led to wars, espionage, and battles fought by thousands of people from nations all over the world. There have been climactic last stands, wars for honor and revenge, and spies who caused more damage than a fleet of warships.

Empires of EVE is the history of how political ideas first began to take hold in EVE Online, how that led to the creation of the first governments and political icons, and how those governments eventually collapsed into a state of total war from 2007-2009.

The best book about the best game, worth playngEVE

Play EVE Online, i was there in 2014 at the fall of INK alliance when we migrated tonthe Drone Lands, i was there when Goonfleet destroyed in straight warfare Nulli Secunda. I took part in the 2016 MoneyBadger Coalition to evict Goon out of nullsec as a revange for Nulli Secunda.
EVE is what you make of it. Needs a second volume

I already own the hardcover book and I was a apart of some of these wars and the times they happened in, but I wanted to hear Andrew tell the story again.

Andrew is a storyteller, both written and when reading it up like this and you can feel his excitement about the content in this audio book. On four separate occasions that I remember off the top of my head I found myself with goosebumps all over my body and shivers running through it. Cochises "All appropriate emotions were applied. We hated them" I had to register to four times before managing to move on.

still got it even after the fifth time

Still got the shakes when I heard the Steve story even after the fifth time.

This makes me wanna play Eve. I loved it. Thanks for this amazing part of Null-Sec history. I hope the authir does more.

The most entertaining history you will ever read

This book makes WW1 and WW2 seem extremely boring in comparison. It also illuminates human nature in a more pure way than any history book as it is more accurate than real history could afford to be.

All you need to know is the basics of online gaming to appreciate the story.

What a blast learning about the struggles and triumphs of player-owned organisations. About rallying calls and political intrigue. About winning wars without dropping bombs or firing lasers.

While Eve will never be my thing, it is always a giddy rush to read headlines online screeching about long-con betrayals and massive wars involving thousands of players.

Content-wise, Empires of EVE will not fail to disappoint anybody - player or not - who has fancied a deeper look into the MMO.

Andrew Groen mostly reads with a neutral tone but sometimes describing epic battles paints a little colour in, which I wished he had buckets more of. Quoting EVE CEOs, on the other hand, is a little more interesting as he tries to mimic their accents, real or imagined. This is my only negative comment about the audiobook.

As a whole, audiobook is fantastic and I look forward to the next iteration of Empires of EVE. I truly respect the massive undertaking of one man documenting the early history of EVE and sharing it with the rest of the world.

EVE Online is renowned for being staggeringly complex. Its high barrier to entry keeps the average gamer out but also insulates the community within their own self-contained universe. Empires of EVE pierces the veil of EVE Online and presents it as a historical drama, with real people's experiences in their virtual lives driving epic events of battle and treachery. If you are unfamiliar with EVE then you will find enough information to put its events into context, and if you're a fan of EVE then you should already own this book. For anyone interested in the dynamics of human interaction and social group behavior, I highly recommend this title.

If you wanna learn about Eve, I know many, many worse ways. Read this, and you've got something to do while you play Eve.

cant wait for the next part

even If the speaker Skill is not on the same level as other professionals. He makes that Up with passion for his Work. while the Game might be not for everyone. the Stories of betrayel, Community and Epic Battles can inspire and i really Look Forward to the next Part.

Great concept with great execution, although it can be a bit lengthy at times. A little less details on some parts would have sufficed. I would rather have had the story reach the present than know every single detail about every single battle/empire. I hope there will be a part two that covers the time from 2009 until today.