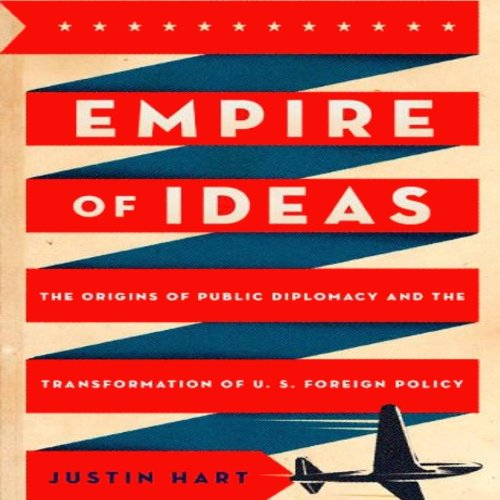 Covering the period from 1936 to 1953, Empire of Ideas reveals how and why image first became a component of foreign policy, prompting policymakers to embrace such techniques as propaganda, educational exchanges, cultural exhibits, overseas libraries, and domestic public relations. Drawing upon exhaustive research in official government records and the private papers of top officials in the Roosevelt and Truman administrations, including newly declassified material, Justin Hart takes the listener back to the dawn of what Time-Life publisher Henry Luce would famously call the "American century," when U.S. policymakers first began to think of the nation's image as a foreign policy issue.

Beginning with the Buenos Aires Conference in 1936 - which grew out of FDR's Good Neighbor Policy toward Latin America - Hart traces the dramatic growth of public diplomacy in the war years and beyond. The book describes how the State Department established the position of Assistant Secretary of State for Public and Cultural Affairs in 1944, with Archibald MacLeish - the Pulitzer Prize-winning poet and Librarian of Congress - the first to fill the post. Hart shows that the ideas of MacLeish became central to the evolution of public diplomacy, and his influence would be felt long after his tenure in government service ended. The book examines a wide variety of propaganda programs, including the Voice of America, and concludes with the creation of the United States Information Agency in 1953, bringing an end to the first phase of U. S. public diplomacy.

Empire of Ideas remains highly relevant today, when U. S. officials have launched full-scale propaganda to combat negative perceptions in the Arab world and elsewhere. Hart's study illuminates the similar efforts of a previous generation of policymakers, explaining why our ability to shape our image is, in the end, quite limited.