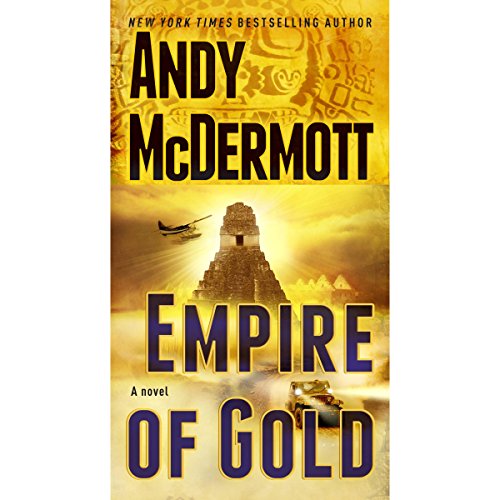 A RUMOR OF RICHES. A MAZE OF MURDER. AND THE WORLD’S MOST DANGEROUS, SOUGHT-AFTER PRIZE.

Nina Wilde and Eddie Chase possess extraordinary pieces of an ancient puzzle that leads them from Singapore to the jungles of South America. Inside a storm of political and drug warfare, Nina is getting close to one of history’s greatest secrets: the mythical golden city of El Dorado. As one discovery unveils another, Nina realizes that a legendary Incan leader made a deal with his Spanish captors - and hid forever the real El Dorado. Now, Nina and Eddie face a maze of death traps and betrayals, including one that reaches into Eddie’s past in Afghanistan, even into his own family in England. Behind a waterfall in Peru is an unfound wonder of the world. And to get there, Nina and Eddie may have to sacrifice everything: their friends, their love for one another, even their lives.

From the Paperback edition.

“No fan of Indiana Jones, Matthew Reilly or action in general will be able to put it down.” ( Northern Territory News, on The Pyramid of Doom)
“Raises the bar to please adventure junkies who prefer to mainline their action.” ( Publishers Weekly, on The Hunt for Atlantis)
“Adventure stories don’t get much more epic than this.” ( Daily Mirror, U.K.)

I've been listening to this series for some time now and I have become very accustomed to the wonderful work and voices of Gildart Jackson. I loved being able to pick out all the individual voices and really hear the emotions of the characters (especially the cheerful humor of Eddie Chase).

After several books into the series, the narrator has been switched to Robin Sachs and it's driving me crazy! Not only are several of the voices fairly similar to others, but i can't concentrate on the story when I hear a well known character speak with someone else's voice. It's like having a friend you've known forever and one day he talks with a different voice entirely! He has the same words and actions, but different inflection, tone, accent and even formant! It really throws you in a loop!

Where does Empire of Gold rank among all the audiobooks you???ve listened to so far?

One of the best stories I have istened to. All of the Andy McDermott books keep me entertained with bigger than life characters and adventure.

The one problem I had with this book was the narration, it was slow and all the characters were too similar. I can't figure out why they changed narrators. I had to actually spped up the playback on my iPod just to make the words flow a little better.

The entire series of books with Eddie Chase and Nina Wilde are very fun to listen to. Eddie Chase kind of reminds me of Dirk Pitt with a serious chip on his shoulder.

What made the experience of listening to Empire of Gold the most enjoyable?

I normally really enjoy the series BUT the narrator on this one was a major let down. Like many others have noted it was a very flat reading. Voices were all similar so difficult at times to follow. Also no real spark or emotion in the readers voice.

It was very flat with no emotion. The characters were all voiced with pretty much the same one.

I have listened to all the books by Andy McDermott and have so enjoyed them that I was so anxious for this new one only to be disappointed by the narrator - I enjoyed gildart and his voices for the characters I am having a hard time enjoying this one as much - hard to follow story and make out distinctions between characters - bring back Gildart!

Where does Empire of Gold rank among all the audiobooks you’ve listened to so far?

I really like this series of books and it ranks up at the tip with the rest of them, but I rarely run across a book I don't like

I've only just started listening to the book, but so far the plit seems pretty good. I like how there have been returning supporting characters such as Macy.

The narrator is why I'm writing this review. He's very slow and nasally to listen to. I've had to up the speed on the audio to 1.5 times just so I don't start wandering off. You truly should have waited until Gildart Jacvkson was available to read this book. It would have wrapped up this series nicely. Not to mention I'm also now contemplating not buying the last book, Return to Atlantis, because I find this narrator so annoying to listen to.

I find it hard as well because now I have to learn which voice is which all over again.

This narrator is good with voices though!

This was the best story. kind of miss Gildaet on it though. Do 1.15x speed makes it better. No offense to Robin Sachs.

I'm a big fan of this series but this is probably my favorite so far.

story was entertaining as usual, but this narrator had me nodding off as some points.

Don't change in the middle of a series

Would you try another book from Andy McDermott and/or Robin Sachs?

I have purchased all the Audible McDermott books but the narrator for book 7-8 is not good.

If these books were re-narrated I would purchase them. I have purchased the rest of the series.

Amazing book from start to finish

This book kept me on the edge of my seat till the very end.
I would recommend this book to all my friends