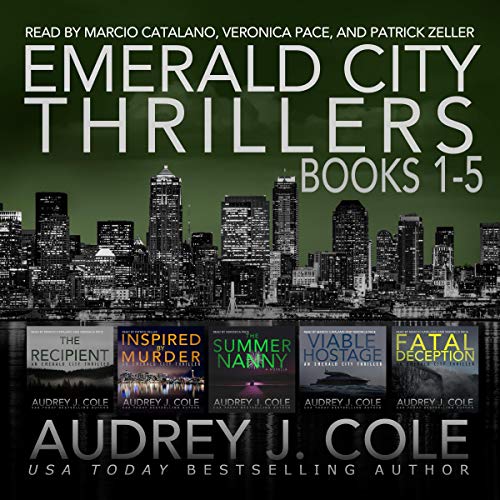 “If you haven’t discovered the Emerald City Thriller series yet, you’re missing out on some fantastic stories! Audrey J Cole delivers satisfying mysteries that draw you in from the first page and keep you riveted until the end.” (USA Today best-selling author Jenifer Ruff)

The Recipient: Sergeant Wade McKinnon knows who killed Samantha the moment he arrives at her crime scene. Problem is, he watched her killer die a year ago.

Inspired by Murder: He’s a master of the human mind. But can he get away with murder?

The Summer Nanny: A Novella: It was the perfect summer job - until it turned into her worst nightmare.

Viable Hostage: Malorie’s best friend is missing. But due to her friend's wild past, no one is worried - until another med student's partial remains wash ashore a Seattle beach....

Fatal Deception: Still recovering from her brother’s murder, Detective Tess Richards transfers out of Homicide...only to find herself in the center of a deadly undercover operation.

So worth listening to

Really good books in this set. Well written and interesting.

The narrator's did an excellent job in their narration.

I received a free copy of this audible. I'm happy to provide my honest review.

This box set contains five emerald city thrillers.
The Recipient: A serial killer is given the death penalty. When more victims arise, questions arise as to who the copycat could be. Meanwhile, a woman’s husband who received a brain transplant starts acting strangely. Could there be a connection between the two?
Inspired by Murder: An aspiring author wants to write a book about murder but needs to experience it to get the right inspiration.
The Summer Nanny: A short story where a babysitter gets caught up in a jewellery heist and murder, which is also linked to her past.
Viable Hostage: When a college girl goes missing, no-one believes anything strange occurred given her past, except her best friend who uncovers strange things as searches for the truth.
Fatal Deception: A detective recovering from her brother’s murder goes undercover to solve a murder associated with a cult.
Overall, the books were entertaining and well thought out. Some were a bit too short to fully connect with the characters but overall were enjoyable. The narrators were really good and performed with passion and energy.
Note: This book was given to me for free at my request and I have left this objective review voluntarily.

Emerald City Thrillers: Books 1-5 was a good read by Audrey J. Cole. This box set consists of; The Recipient, Inspired by Murder, The Summer Nanny, Viable Hostage, and Fatal Deception. In The Recipient, Sergeant Wade McKinnon knows who killed Samantha but he watched him die a year ago. In Inspired by Murder, a master of the human mind tries to get away with murder. In The Summer Nanny, the perfect summer job becomes a nightmare. In Viable Hostage, Malorie's best friend is missing and no one seems worried. In Fatal Deception, Detective Tess Richards finds herself in the center of a deadly undercover operation after transferring out of Homicide. I enjoyed these books and cant wait to read more by Audrey J. Cole.

Fantastic narration and thrilling stories! All I wanted to do was keep listening! This is an excellent thriller box set.