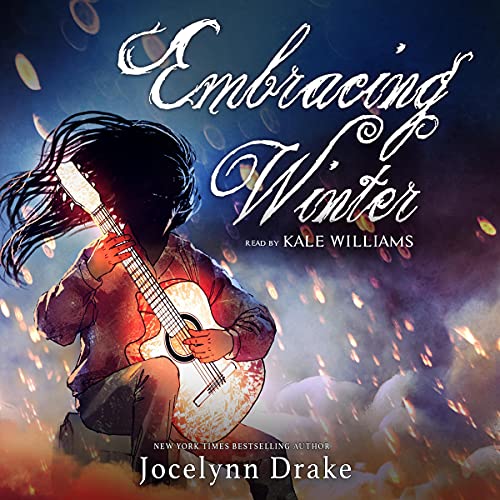 Winter Varik believes in only one thing - protecting his family.

For nearly 200 years, he’s kept a dangerous secret from his brothers.

But Winter might have found his salvation in the form of a sexy witch named Fox.

Too bad this same witch was named in a prophecy foretelling the destruction of the Variks.

In a race to uncover the truth behind the prophecy and take down a vampire determined to kill all the Variks, Winter may have to choose between finally having his heart’s desire and the family he loves.

Embracing Winter is the fourth audiobook in the Lords of Discord paranormal romance series. This audiobook contains vampires, werewolves, witches, nosy brothers, music, lots of rope, sass, hope, dirty talk, redemption, and a love that will never end. And did I mention rope? Lots of rope.

There are no words for me to explain the greatness that Jocelyn Drake is. Her books and universes are wonderful and filled with adventure and romance, intrigue and happiness. It’s lithely everything you want to see in a series. Winter’s story is finally here, and Miss Drake did not disappoint, our dark angel of death finally finds his soul mate, Fox is everything Winter needs, and Winter is exactly what Fox craves.
Although we still have Aiden’s book, this book was the culmination of the action packet plot we have been carrying from book 1, and what a wonderful journey it was. Simply perfection.
As a bonus, we also get to enjoy sneak peaks of all of our favorite couples, trust me, this book exceeded all expectations -at least for me-

There is way too much sex stuff in this book. It’s more sex than story and I was disappointed. Also the narrator doesn’t fluctuate his voice hardly at all and he always sound exasperated.