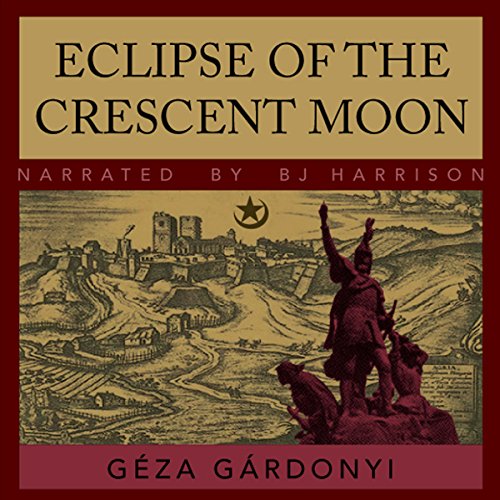 Eclipse of the Crescent Moon

It is 1541, and the crown of Hungary is up for grabs. King John, seeing that the Austrians are attacking with an innumerable force, petitions the Turks for assistance. King John then dies, leaving an infant son. While the Turkish army is en route, the Hungarians rally their forces, and beat back the Austrians themselves. Then, just as the Austrians are beating their final retreat, the main Turkish army arrives at the castle in Buda. And among their number is the sultan himself.

In the years that follow, the Turks relentlessly invade Hungary, their efforts culminating in the siege of the castle at Eger. The Turkish army numbers over 200,000. The Hungarian defenders number only 2,000. Now it's your turn to take part in the adventure, and journey to the land of medieval Hungary.

Based on historical people and events, this story does give a vivid picture of the time.

The battle scenes are detailed as is the impact of the invading Turks. I can understand why this book appealed to boys.
What I did like was the inclusion of Gypsies and their acceptance into the wider social scene. Here there are children being heros and great adventures going into foreign places as well as women being both mothers and warriors.
Great Armies and pillaging, captured people and slavery, the spread and impact of the Reformation. All this and, secret tunnels and castles with drawbriges. And the wise use of Paprika in making a meal.( if you and not your captors) like chilli.

NEVER MORE do I buy anything from the Audible

Bit rate 64 kbps: substandard, inaccessible sound quality. 19:42 hours as a single file without chapter division! Absolutely unmanageable! With Audible's own file format so it can't be handled with my other audio books.

NEVER MORE do I buy anything from the Audible disaster company! Amazon should be ashamed! (First I got the book free from Audible but the file required updates so I bought it through iTunes for full price so i thought it would be a normal MP3.)

The book is great and is about how the Turkish-Muslim horde conquered Hungary in the 16th century but how the barbarians' 200,000 soldiers defeated of 2,000 brave Hungarian soldiers who defended Eger's stronghold. Historical facts are illuminated by people's lives at that time, including even a love story. It is an extremely interesting novel whose historical part (the behavior of the muslims) is again relevant in Germany and Sweden with several other countries in the EU.

History shows what Turks are all the time

Very well written Hungarian historical story.
As Hungarians suffered under ottoman invasion, so is a lot more cultures suffered same from Turks
which you will never hear anywhere else . history books alway will tell you about the Turks were bad people in many ways. Those are the Turks throughout the history that would never change until today. 500 years ago or five days ago they are still same violent Turks.
Beside that you will enjoy the action and excitement in the book I love it.

B J Harrison is very well narrater I have listened and followed he's podcast for manny years I always enjoy he's choice of the books...

Excellent story about relationships while describing a period of history in Hungary. Especially relevant today to understand the perfidiousness of Islamists.