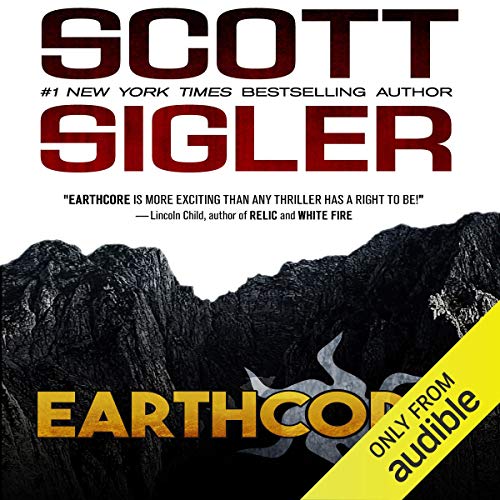 Deep below a desolate Utah mountain lies the largest platinum deposit ever discovered. A billion-dollar find, it waits for any company that can drill a world's record, three-mile-deep mine shaft. EarthCore is the company with the technology, the resources, and the guts to go after the mother lode. Young executive Connell Kirkland is the company's driving force, pushing himself and those around him to uncover the massive treasure. But at three miles below the surface, where the rocks are so hot they burn bare skin, something has been waiting for centuries. Waiting...and guarding. Kirkland and EarthCore are about to find out first-hand why this treasure has never been unearthed.

The Good: The narration by Ray Porter was excellent - male and female voices, ethnic accents, use of non-word cues were all excellent. I'm looking forward to more Ray Porter. The underlying concept of the book was interesting, but was marred by The Bad (below).

The Bad: Everything else. There was not ONE sympathetic character in the entire book. I didn't like, or relate to, ANYONE. Some of the characters were so two-dimensionally evil or obnoxious that it felt like fingers on a chalkboard every time they were on stage. The violence was uncomfortable and endless. The profanity from every character began to feel like middle school boys trying to best each other at being bad ass. Finally, while POSSIBLE, I found it highly IMPROBABLE that at BYU graduate student and her adopted BYU professor father would be foul-mouthed atheists. I attended BYU and never encountered people like these - especially representatives of the school. It seemed like Sigler picked a major university near where he wanted his story to play out, but knows nothing about the school itself. I kept hoping the characters I didn't like from the beginning would somehow redeem themselves, but for me that never happened. I only finished the last few chapters to be able to credibly write this review.

This book was very hard to stop once I started. I really enjoyed everything about it. I like how it's a mystery science fiction book and seems to be poised for a series. The characters are very well developed and each have true motivations. I like the way Sigler takes the time tell the story. He really doesn't rush anything. He is clearly a very creative person with a big imagination. I can also tell he spent time learning about the mining industry. What would a sci-fi book be these days without cool technology and of course guns? He delivers on the tech side and gives us some nice action scenes. The Kool suits are badass. I wouldn't have minded him expanding the gun/black ops aspect but it seems that will be coming in the next book if there is one. Overall I highly recommend the book and really look forward to the next one.

Now for Ray Porter. He is the best narrator on audible right now. I enjoy listening to books and for me the narrator is a big factor for the books I choose. Ray gives an amazing performance in Earthcore. He makes the book rise up and brings each character to life with unique voices. I also enjoyed the little bit of production in there. They use a little sound in between each intense scene to kind of accent the moment. Usually that type of thing is annoying but it works great with Ray Porter's bad@ss performance.

This was a fun read! It started a bit slow, with a lot of character and plot building, but I was soon hooked on the story. What was happening in that cave? Who would get to the truth first? And who would survive?

I found the characters well presented, giving them background and depth to make them more interesting. Although the backstory of one of them, Kayla Meyers, could've been without the explicit telling about the abuse she went through as a child. Way too detailed.

There were no real heroes, IMO, in this book. No anti-heores either. Just people, making them more interesting to follow.

The secret down in the caves was cleverly revealed, making me want to find out more and more, faster and faster. It was hard to stop listening, the further down they got.

Maybe the writing is a joke about itself?

It might be unfair to rate a book I haven't finished, but after a few hours in, I see little reason to keep listening, and Earthcore will likely be the first book I return to Audible.

Somewhere in this story, there might be an interesting premise. In order to get to that premise, you have to wade through some of the most poorly written characters in the genre. Everyone in the world of Earthcore is a world-weary, cynical, self-styled badass who curses like a clichéd truck driver and whose internal monologs exclusively take the form of weak sexual metaphors. The problem isn't that the language in and of itself is offensive—it's that it's so over the top, so relentless, that it becomes self-parody by the third chapter. Worse, it's self-parody that the writer seems oblivious to.

The thinly drawn characters are, so far, accompanied by extensive chunks of unnecessary story. Plot point after plot point is presented, and the outcomes are always predictable. For example, if one character decides to blackmail, betray, or harm another character, their efforts will be successful as if by fiat. There are no clever twists or reversals. Yet the book spends chapter after chapter trying to earn these obvious outcomes, belaboring pointless details that add nothing to the story. The plot remains predictable, the characters remain shallow, the dialogue remains ridiculous.

Lastly, I bought this book because several reviews likened it to Peter Clines. I don't see the comparison at all other than that Clines' books are in the same genre. Frankly, I'd argue the comparison is insulting to Clines. And poor Ray Porter. I can only imagine how much eye-rolling he did while narrating this. I hope he knows a good ophthalmologist.

If you want a story that is engaging, fun, clever, or thoughtful, dig elsewhere.

Don't Start Reading until you have Time

Who would ever think that a story about mining could be so addictive? This is a complex book with many storylines. Although mining loosely ties the stories together, the rich component of characters is at the heart of the story. There is a lot of action and a lot of twining plot lines.
I don't want to give away the story so I will just say I spent every possible moment reading " just one more chapter." I was truly sorry when the book ended so I just read it again immediately!

What did you love best about Earthcore?

Fast paced, bogged down a little bit in the middle, but overall kept my interest through the whole 19 hours.

The character development. I felt like I really got to know (most of) the reasons the characters reacted the way they did.

What does Ray Porter bring to the story that you wouldn’t experience if you just read the book?

Mr. Porter is hands down my favorite narrator and was a perfect choice for this book. I have listened to almost everything he has done. This was an automatic buy for me, and did not disappoint.

Why is this not a movie already?

Well worth the credit, highly recommend.

People who like blind action films and don't care about facts, reality, or continuity.

Nothing by Scott Sigler. I'm listening to Stephen King now to cleans my palette.

Have you listened to any of Ray Porter’s other performances before? How does this one compare?

I'm not sure. I thought the performance was terrific! Excellent.

What character would you cut from Earthcore?

Kyla. She sucked, was annoying, and most of all, she had no purpose.

The beginning of this book was well done and intriguing. And the story line was creative. However, I soon found most of the characters were complete jerks, to put it mildly.
I wanted to abandon this book many times, but was intrigued by the story line and had hope that it would get better.
It didn’t.
And now my eyes hurt from rolling them so many times.
I didn’t care about any of the characters, except one, and when things went south, I wanted all of them to die. When the stupidity started, I wanted to throw the book across the room – but it’s an audio book, so that takes the fun out of it. Then the stupidity kept coming.
The author has a good imagination, but doesn’t care about continuity. I read an review that said this book would make a good movie, I agree, for the brain-dead, bloated Americans who like those big action films that leave the rest of use feeling like we lost brain cells. The kind of movie that caters audiences made up of 9 year old boys. The kind that doesn’t worry about anything but big, dramatic, action.
There were so many holes in the storyline I had to back it up several times to see if I missed something. Nope, I didn’t, the author did – and so did all the editors.
I felt compelled to finish this book to see how it ended with the hope that the holes would be filled. They weren’t. In fact, instead of rolling my eyes at the finale, I was incensed that the author not only chose genocide to end this story, but as a cheap precursor to a sequel.
Genocide?! Scott Sigler, are you actually condoning and promoting genocide?
The scene is set for the sequel of “retaliation” with the overt goal of genocide. Yet, the man who wants this retaliation was part of a team that invaded this other cultures world. The beings he wants to retaliate against were simply defending themselves. AND, they let him live. For that, he wants to wipe them all out locally and around the world.
I found the characters shallow, the plot interesting, the storyline insipid, and the ending, disgusting. Shame on you Scott.

This isn't my genre of choice, but holy cow.

The story sucked me in, the performance kept me coming, and the plot twists - I was addicted to the very end.

Dang this book is entertaining. Certainly in the top three I’ve read this year. Though not a literary masterpiece, it is creative and very well written. Characters are all pretty much one dimensional - in the same dimension, but that’s part of Sigler’s style. I think he was going for how many antiheroes he could include in a single book. Porter brings it all to life in a great way that makes it work for the reader. Definitely got my credit’s worth from this book.

This is a great thriller. I listened from beginning to wnd and had a hard time putting it down. But, I hated almost every character. They all came across as bad knock offs of Tarantino characters. Their dialogue and internal monolog was one dimensional with to much focus on trying to sound edgy Tarantino characters but failing. On top of that the characters were unlikable sprinkled in with a little bit of redemption which made it bearable. If the action and suspense weren't so well done I would have given this a 2, but as it were that part of the book was excellent.

had me on the edge of my seat the entire time, well done! :D
performance by Porter was spot on as usual