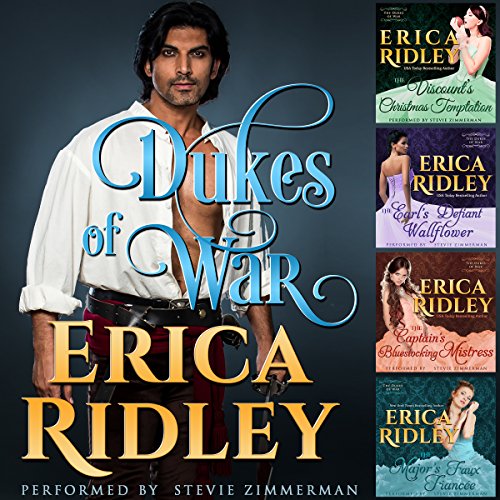 Books one through four of the best-selling Dukes of War series:

Certain individuals might consider Lady Amelia Pembroke a managing sort of female, but truly, most people would be lost without her help. Why, the latest on-dit is that rakish Viscount Sheffield is canceling the fête of the year because he hasn't time for silly soirees. He doesn't need time - he needs her!

Oliver York returns from war to find his father dead, his finances in arrears, and himself the new Earl of Carlisle. If he doesn't marry an heiress - and fast! - he and his tenants are going to be pitching tents down by the Thames. He definitely shouldn't be trading kisses with a penniless debutante...no matter how captivating she is!

Spinster Jane Downing wants off the shelf and into the arms of a hot-blooded man. Specifically, the dark and dangerous Captain Grey. She may not be destined to be his wife, but nothing will stop her from being his mistress. She could quote classical Greek by the age of four. How hard can it be to learn the language of love?

Miss Daphne Vaughan hates that crying off her fake betrothal will destroy Major Blackpool's chances of finding a real bride. She plots to make him jilt her first. Who cares if it ruins her? She never wanted a husband anyway. But the major is equally determined that she break the engagement. With both of them on their worst behavior, neither expects their fake betrothal to lead to love....

STARTS OUT WELL BUT WEARS ON

I enjoyed the characters and most of the stories. The author builds a great community and I enjoy encountering them from book to book. The book did get a little wearing especially on the last one where the main characters were constantly hashing over the same fears and assumptions-- i.e. The guy lost his leg and he believes he's worthless, also thinks he is responsible for his brother's death-- this gets hashed and rehashed too many times. If it had been a book I was near to throwing it. The young lady kept going over and over how unloved she was and how marrying the hero was impossible. It was just too much. A little of this goes a long way. Otherwise engaging and fun.

I loved all of the stories being together. I even listened to the two I had already heard. Erica Ridley writes great stories

I enjoyed the stories until they became so graphic. Why do you spoil a good book like that. I wouldn't have chosen this if I had known. I wish you would explain that in the description of the story.