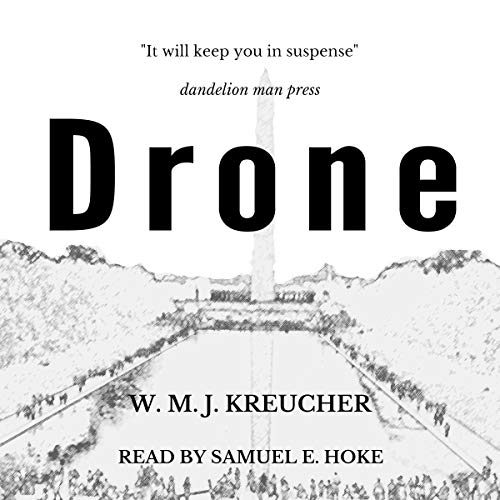 We rely on automation. Our cars parallel park themselves. The military uses unmanned aerial vehicles for surveillance. We can't go anywhere without our phones. Our lives are ripe for hacking.

Not that anyone would.

When a group of high school friends meet at their 45th reunion, they discuss the hypothetical. With all these wireless networks, could someone hack a military drone? Unknown to them, a Russian spy gets wind of their idle chatter and plans to put their idea to the test.

Vasili Grigoriy Konstantinov commandeers a drone flying over Washington DC and terrorizes the National Mall with a low flyby. Then, things escalate.

Where does Drone rank among all the audiobooks you’ve listened to so far?

I have listened to many dozens of audiobooks, mostly in the car and mostly from authors I know well. This story ranks in the top echelon- the ones where when I get where I'm going I cant get out of the car until I finish it-or at least finish the chapter. If audio books could be 'page burners'-- this one would be on top.

What was one of the most memorable moments of Drone?

I admire authors who can sneak story elements in on the reader. Kreucher did this repeatedly- the 'read' was nearly a road hazard.

What does Samuel E. Hoke bring to the story that you wouldn’t experience if you just read the book?

Hoke's performance was well matched for the material. His distinction in voice between characters and his talented facility with eastern European dialects added significantly to the experience. At one point he scans a 'menu' of vodkas which, had I been reading, Im sure I would have scanned and not tried to articulate

I sat in the car in front of my hotel at the end of a trip and finished it. that says it all!

Kreucher's masterful character development, imaginative plots and world-class pacing made this his best effort to date. This one captures the 'audience' early and hold them captive all the way to the end. 5 stars.

Drone.
this is a great fast paced book. It its a great story about how if your conversation can be over heard it can totally be taken the wrong way and wind you up in a heap of trouble.
a few old friends are sitting at a dinner talking about how easy it could be to take over a drone, just fantasizing about how easy it would be, playing around with the idea, and BAM there world soon becomes upside down! scary how fast thing can happen
The narrator did an great job on this book! and I look forward to hearing more from him!


was gratefully provided this audiobook at no charge by the author, publisher and/or narrator for an unbiased review via Audio Boom..

When Is the movie "Drone" coming out?

Would you listen to Drone again? Why?

I plan on it. The technical details of the story are fascinating and worth a closer listen.

Without a doubt, it was Sam. For being a freaking genius, he had humility. Just an regular guy to his wife and friends. When put to the test, he was calm, cool, and collected. He was a hero without the need of weapons other than his mind and practical skills.

What does Samuel E. Hoke bring to the story that you wouldn’t experience if you just read the book?

Hoke was THE right voice for this story. His Russian accent added personality to the east European characters and his southern drawl brought credibility the military types. Hoke managed to keep the story on top without letting the accents get in the way. Perfect.

"Drone" is catchy enough. Keep it.

It was a trivial, yet fateful tweet from a waitress that linked an ice cold Bulgarian assassin to a group of 60 something techies enjoying a “theoretical” conversation at their high school reunion. Within a matter of days, the theory transformed into a reality—that held the breath of our nation, it’s president and top military brass. Could a single, pilotless aircraft threaten the nation’s capitol, the lives of millions, and enable Vasili to walk away with software capable of changing 21st century military strategy? The ruthless assassin had calculated an airtight plan to do exactly that. Only one computer code writer could deliver the goal he sought—and this man was resourceful. If you like a story of an ordinary Joe pitted against an extraordinary foe, “Drone” is a sure bet to keep you listening in your driveway—till the last chapter.

I highly recommended this one for true action fans interested in political thrillers.. lots to love . very well written and wonderful narration..
This audiobook was provided by the author, narrator, or publisher at no cost in exchange for an unbiased review courtesy of AudiobookBoom dot com."

This was a really interesting and suspenseful book. With all the talk of drones and their capabilities, this book is especially relevant and scary in that it could actually happen. The book is well-written and gripping - I didn't want to put it down. I listened to the Audible audio version of this book narrated by Samuel E. Hoke, and I was pleased with his narration. I especially appreciated that he didn't give his female character a whiny voice, which happens so often in the books I listen to. He had good differentiation of characters, good pacing, and good cadence. I would definitely listen to more books narrated by him. Overall, this is a really exciting and gripping book, and I would definitely check out other books by this author.

good book, well written and suspenseful. I would recommend this book to anyone that likes a good story line with some mystery intertwined.

Would you listen to Drone again? Why?

Yes, it deserves to be a movie with action twists and turns mixed with mystery.

A fun piece of schlock.

I did receive this copy for free in exchange for an honest review.
This is perfect airport/train fun. Are the characters well developed? Eh they're developed enough. The pace is built well enough that I had fun. That's what I was looking for. There is quite a bit of tongue in cheek humor with the cliche characters. It builds well into a satisfying climax.

Too close to home!

What made the experience of listening to Drone the most enjoyable?

It kept you in suspense with all its twists and turns.

When the 2 guys confess that they foiled the drone program.

It scared me with the possibility that this could be implemented in reality.

"I was provided this audiobook at no charge by the author, publisher and/or narrator in exchange for an unbiased review via Audiobook Boom."

An innocent tweet. A Rogue KGB agent. What could possible go wrong?

DRONE is a thriller that grabs your attention early and compels you to continue listening. Sam and Pat are two friends deeply in love with their significant others. Vasili Grigory Konstantinov loves no one, nothing in his life has value, he has only a single purpose.

If you like a fast paced story, excellent storytelling skills, and a creative protagonist you will enjoy DRONE by W. M. J. Kreucher and narrated by Samuel E. Hoke.