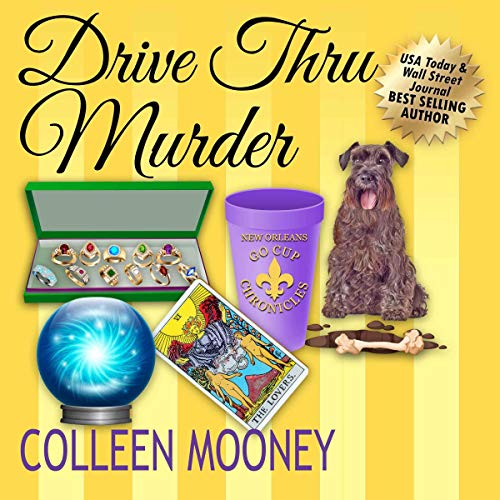 A Murder Scene Where Nothing Is as It Seems

Brandy witnesses a murder at a drive thru joint with the unlikely name of Cluck It: Chicken by the Bucket. And then it turns out nothing at the scene’s what it seems, or at any rate nobody’s who they seem. Seems Cluck It is not just a place to clog your arteries but also a transgender hangout. And with that discovery, you know you're in New Orleans.

Brandy’s complex Irish Channel family develops the kind of problem that is a lot more fun on the page than in real life. What to do when your sister gets pregnant with one of the next-door twins, but she doesn't know which twin? (Be glad it's Brandy’s problem, not yours.)

She also finds a mysterious box of valuable jewelry under her closet floor, becomes the unofficial caretaker of the Tarot reader across the street who knows the future but can never predict when she’s going to get so drunk she’s going to fall into her own bushes, and develops a strong suspicion about one of her other neighbors, all the while juggling the two Romeos.

Luckily, Brandy Is Better at Solving Mysteries Than She Is at Wrangling Her Boyfriends

The listener can rest assured she’s eventually, and in fine style, going to weave together the myriad mysterious strands that confound the police (who happen to count Boy Friend #1 among their ranks) and present them the solution with all the panache of an old-style detective like Hercule Poirot, yet none of the pretension. You can almost hear her wondering, “Did I do that?”

If you like contemporary stylish heroines like those popularized by Janet Evanovich, Elaine Viets, Stephanie Bond, and Gemma Holliday, and humorous mysteries like those by Donna Andrews, Dorothy Cannell, and Lisa Lutz, you're going to get a girl crush on Brandy Alexander.

Scroll up and grab your copy today!

Drive Thru Murder is Book 3 in the New Orleans Go Cup Mystery by Colleen Mooney. Brandy and Suzann are moving to a new house and today is moving day. Brandy decided to get Drive thru chicken from Cluck It: Chicken by the Bucket. Instead of chicken, Brandy witnessed a murder and a kidnapping. In true Brandy luck, the kidnapping was a transgender man dressed as a woman. Dante comes to investigate and is not too happy to find Brandy at the scene. The murder is not the only exciting theme of the book. Colleen Mooney has written a wonderfully layered story. We have the murder/kidnapping, Brandy’s new neighbor reads Tarot cards and is a phone sex talker, Brandy and Jiff go away for a weekend, she gives Hanky a makeover (Dante is really not happy about that because the police officers are noticing her), well, there’s so much fabulous drama and laugh out loud fun in Drive Thru Murder. Alyson Krawchuk is fantastic with the narration. I have read the book and listened to the audio, both are wonderful. I am really looking forward to reading/hearing Book 4.

I just finished Drive Thru Murder, the third book in the New Orleans Go Cup Chronicles series. OMG! I loved it. I haven't laughed out loud at a book since I started reading and collecting Janet Evanovich books quite some time ago.

Brandy’s life is more than complicated. She witnesses a murder at a drive thru joint that is also a transgender hangout. Her sister gets pregnant with one of the next-door twins, but which? She must find the owner of a mysterious box of valuable jewelry located under her closet floor. And last, but not least, she becomes the unofficial caretaker of the Tarot reader with a drinking problem who lives across the street.

I can't remember the last time I was this excited about reading/(listening to) an author's entire series.

Murder to go in NOLA


Another marvelous murder mystery set in NOLA with a zany cast of characters that includes friends, family & foes. The narrator in this audiobook version again brings the outrageous goings on in Brandy Alexander’s world to life with a flair for the funny & fantastic. An innocent late night trip for take-out chicken results in witnessing a shooting & kidnapping. Brandy has a knack for being in the vicinity during this type of heinous happening. As in the other books her cop friends are assigned to the case but don’t want her to investigate on her own. Since the city & neighborhood are daily destinations for Brandy, she stumbles upon key suspects & witnesses everywhere she goes. A strange neighbor of hers turns out to be involved in both crimes as the clues begin to make more sense. Meanwhile her family drama doesn’t diminish at all. Brandy’s mother again shows her mean streak & her sister complicates the frazzled dynamic between her childhood friend Dante’s family & her own. The new lawyer boyfriend Jiff still hopes she’ll choose him. Believe it or not the two men in Brandy’s life assist her in exploring the raunchy bunch involved in the different downtown NOLA neighborhoods. A shady bartender seems to be a key player in all areas of the action and adds a surprise twist to this tawdry tale of sex, lies, and murder among a group of colorful cross-dressing criminals. Even Brandy’s supportive roommate gets sucked into the salacious saga. This story’s surprising solution leaves you stunned but satisfied and anxious for more nutty NOLA adventures with Brandy in the near future. I highly recommend this book & all others in these hilarious mysteries - The New Orleans Go Cup Chronicles.

This is the third book in the Go Cup Series. It can be read as a stand-a-lone. To get a full sense of the characters, I recommend starting from the beginning even though I jump around in this series. Each book of the series has the main mystery resolved before it ends.

I like the quirkiness of each book, the characters, and the interaction between Suzann and Brandy.
In this episode, the Cluck It robbery/murder and the found jewelry pose two mysteries to be solved.
I am hoping for an amicable resolution to the Jiff-Dante-Brandy triangle. Dante needs to open up to Brandy or maybe it’s too late. We’ll see as the series continues.
The narrator does a good job with it. The author infuses the book with humor which makes the story progress quickly. I have to agree that Brandy appears to be a magnet for trouble. I especially enjoyed the family drama and learning her sister is really manipulative. Not sure I would trade my reputation for a marriage proposal.
This was very entertaining and kept me company on my daily walk.

I highly recommend this book and series.

Brandy Alexander (yes that’s her real name) finds herself smack dab in the middle of another police investigation, or two. Being in the right place at the wrong time, Brandy witnesses a kidnapping and murder, and things spiral from there. Oh, and her personal life is in upheaval too!

Colleen Mooney has written another entertaining cozy mystery set in the streets of New Orleans. The characters are quirky, the setting is fabulous, and the mystery keeps you guessing.

Another well done narration by Alyson Krawchuk. No complaints here.

Murder At The Drive Thru

Quirky, loveable, and well defined characters that you know that you actually know. A kidnap and murder at Cluck-it drive thru chicken restaurant sets the stage for a fun ride through New Orleans. A little romance, a make-over, two more murders, and a couple of scam artists round out the story. And, never a dull moment in the Alexander family home. I was gifted this from the author.

This is the third book of the Go Cup Series and while it can be read as a stand-a-lone, I recommend starting with the first because while each mystery is resolved in each book, the personal story line of the main character, Brandy Alexander continues throughout. The book combines a little romance, mystery, and humor. In this book, Brandy Alexander witnesses a kidnapping at a drive thru and a resulting murder once again landing her smack dab in the middle of a murder investigation that her childhood friend, Dante has to investigate but Brandy, being Brandy, can't help but stick her nose in further and investigates on her own as well and assists in solving the crime. The narrator does a great job with making voices distinct and bringing the characters and story to life. I look forward to reading/listening to the next book of the series. I received a copy of the audiobook for free at my request and am leaving my honest review.

I've come to expect Colleen Mooney's Brandy Alexander series to provide a great mystery story with quirky characters and all the laughs I can handle and this third story in the series didn't disappoint.
Brandy's moved into a new apartment with her stripper friend Suzanne and expected a more peaceful existence now that she's moved away from her family and Dante's, but a late night trip to a fast food chicken restaurant's drive-thru changes all that and lands her in the middle of a series of murders.
I love the characters, the NOLA setting and Brandy's unerring talent for finding herself in the middle of one disaster after another, both in her amateur sleuthing and her dysfunctional family life.
This one's definitely worth a read.