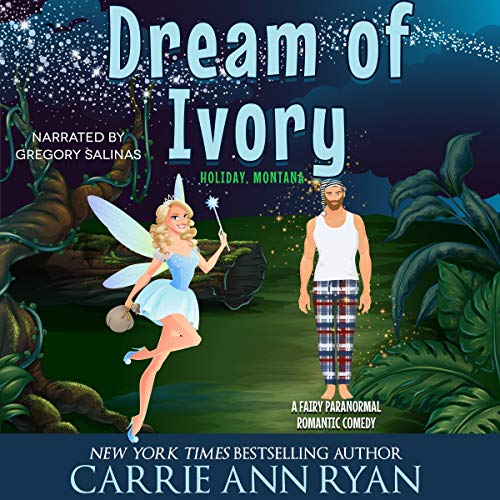 Jackson Cooper hates magic. Even though his brothers are falling prey to the seductive draw of the paranormal world, Jackson wants nothing to do with it. He also wants nothing to do with marriage, babies, and all that comes with it. He's content with being the stoic, but quiet, Uncle Jacks. But when a woman from his past, one he's been dodging for years, comes back to town, Jackson might have to reevaluate his plans.

Honor Bridges is the tooth fairy. Well, not the tooth fairy, but at least one of them. For the past eight years she's been on her own, hiding from what she truly wants. Now she's back in Holiday and ready to take over her duties...as well as deal with Jackson once and for all. But, there's another player in town who isn't happy with the decisions she made all those years ago and Jackson might be the one who takes the brunt of that anger.

Warning: Contains a wickedly spicy tooth fairy - complete with sparkly wings, the most tortured of all the Cooper brothers in all his broodiness, and dreams that are sure to make you never want to wake up in this final Cooper Brothers installment of the Holiday, Montana series.

This is a really good series and this final story from Holiday, Montana had all the great characters and emotions as the first 4 stories, I'm glad Jackson got his story.

The narration was good

Story comment: This is a fun, over-the-top story. I loved the idea of tortured (dentist) Cooper meeting his match in the tooth fairy!

Narrator comment: Gregory Salinas does a great job narrating Dreams of Ivory. His voices suited the characters, I felt the emotion and chemistry between the characters and he bought the book to life.

My favorite of the series!

This is such an enjoyable story!! First off I loved the idea of the tooth fairy. I was curious how the author would have her do her job. I wasn’t disappointed. Second favorite thing is Jackson...his job fits in perfectly with the tooth fairy. He is also against magic and the only Cooper left not married. So you know...things are gonna be changing for Jackson. Thirdly...all the wives of his brothers!! They are simply adorable now that they are married. They also have certain grocery demands that their husbands ask Jackson to do for them. Peanut Butter never got so much attention.

Over all this is such a fun and delightful story. The characters made me smile. The story does have a little darker side but for the most part it’s light and fun.

I listened to this on audio. Gregory Salinas does a great job on this little holiday story.

This audio will fulfil your dreams

Book 5 in the series. So far I’ve listened to the other 4 and love them all . Carrie Ann writes stories that will grab your attention and not let go till the very end . Carrie Ann likes to throw in every day life with a bit of a twist
Hero is Jackson. Heroine is Honor

Jackson is the oldest of his brothers and he is also a dentist . He also hates how all his brothers are taken , happily married. He vows that won’t happen to him . Not only that but all his brothers have fallen for a magical other half . Jackson doesn’t believe in magic . There is a reason he doesn’t want to get married, something that happened to him 8 years ago scared him . Jackson started falling for Honor but she just got up and left him . He doesn’t know why but not only that he just doesn’t trust women . Jackson gets a surprise when Honor shows up at his dentistry . Will Honor tell him why she abandoned him . Will Jacob still be the only brother left unmarried or will he also tie the not .
Gregory Salinas again nailed down this performance. His voice is strong , clear and he does all the characters perfectly

The Sandman and the Tooth Fairy

The read gave more possible characters an opening to come to Holiday MT. Cooper connection to Holiday finds meaning. There was a lot more to Holiday than previously revealed.

Gregory did his job and relayed each character with clarity and distinction.