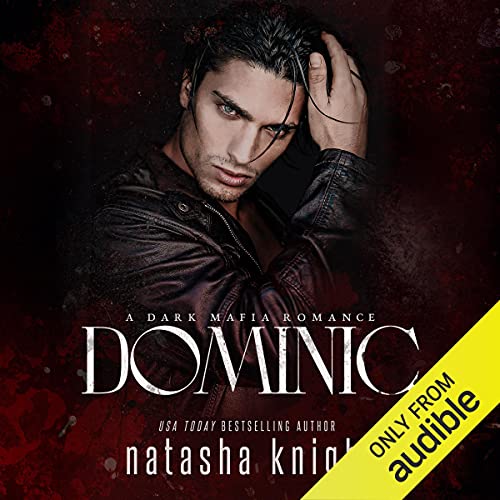 I was the boy who would never be king. The monster who could never be loved. Gia was just a job. Just another girl caught in a world of monsters. It didn't matter that I liked the look of her. I didn't care that she cringed when she saw my soul.

I liked it. I liked her fear. And I wanted her.

Monsters didn't get to live happily ever after, though. I knew one day I'd have to go back. Because time neither forgave nor forgot.

And neither did I.

Old debts needed to be settled. Enemies punished. It was past time I returned to the family business. I'd been gone far too long.

All my life, I believed in fairy tales. Not the Disney kind. Never those. I always knew life was darker than that. I was the daughter of a foot soldier. The sister of a snitch. A nobody.

Monsters had been part of my life for as long as I could remember, but none as dark as Dominic Benedetti. None as cruel. None as broken.

I had no illusions about what he was. I had no desire to save his soul. And I couldn't care about his bleeding heart.

But love isn't always beautiful. It could be a twisted, ugly bitch.

I'd always known this was the kind I'd find. The only kind that could touch me. Because some of us, we belonged in the dark.

And Dominic and I belonged in the dark.

A CHILLING & INTENSE GLIMPSE INTO DARKNESS

Phewee.. well the second offering in this series was definitely dark and it's certainly not for the faint of heart or for anyone looking for a feel good romance with a loveable hero. Because Dominic was a monster and he knew it and revelled in his cruel dark life by breaking-in and training female captives making them ready for auctions. But, as soon as he locked eyes with Gia his new captive, he knew she was going to be different.. however he didn't know then just how much her story would impact on his life and change the whole course of his future.

Gia had watched her brother be tortured, branded and then killed and she too was branded before being sent to a cabin in the woods where she would meet a monster with a skull mask on. He unceremoniously bathed her, spanked her and chained her to a cold worn out bed - a bed that had no sheets, a bed that was stained by its previous captives and that bed would be where the monster and Gia would become better acquainted. And, as her ownership brand was slowly revealed, it would turn out that Gia and Dominic had a lot in common, they were both dark, they both wanted revenge.. and answers too - but they could never have planned for what was waiting for them as their journey together unfolded.

Well I wanted something different and that's exactly what I got.. it was a dark raw journey of an anti-hero who saves a strong heroine and saves himself in the process. There was sex, passion and a story that would somehow semi-redeem a cold-blooded monster hero who'd emotionally been in a bad place for the last 7 years (since book 1). It was well written, intense, emotionally deep, had twists and was filled with chilling suspense - but the real hero was Michael Pauley whose narration was dramatic, on point and was just perfect for this book.

Worth a credit? Yes.. but you'd better be sure your nerves can handle it.

I am a huge fan of dark romance and suspense, and Natasha a knight brought both of these to us with Dominic's story. While listening to Salvatore, I took an interest in the character of Dominic, you could see his tortured soul long before the family secret is revealed. The way he he carried himself, the arrogance, the darkness and his drive were all present, but his heart shine when he was near his daughter. Now in his own book we get to see how dark he really is.

We meet Dominic seven years later, and his new profession brings out his darkest side. Here is where he meets Gia, the one who is completely different from all the other girls he has to train for their life into slavery. Not only has he been attracted to her, he has met his match. Every push he gives, she pulls. As the story builds, and we learn all the players and circumstances, we get see what a strong woman Gia is. I especially love dark, alpha males, but strong women characters to me are a must. Natasha Knight is a master at this, giving her strong male characters equal counterparts. We get to see Salvatore and Lucia again, but I have to say, my favorite scene was with Dominic and Effy. Tears were brought to my eyes! Oh, and I have to mention the hot, sex scenes...scorching!

I listened to this book, and Michael Pauley was the perfect pick. I have heard him narrate a lot of books, and as soon as I saw his name, I knew this was going to be an incredible audio. He brings the darkness through flawlessly and makes you feel every emotion both Dominic and Gia feel. You could not have had a more perfect performance.

Yep, I was right. DOMINIC was everything I hoped it / he would be and more. However unredeemable you might think him to be – I don’t care, I fell for him, hard and fast, and I wouldn’t want it any other way. Should I feel bad for loving a corrupt and utterly dark and twisted alpha male? Probably. Whatever. Pffft!

Because, deep down, Dominic hides his broken and lost soul. Ever since his world came crashing down on him seven years ago the night his father told him the truth of his birth – and after always being second-best, the one to do all the dirty work without receiving recognition, it was the final straw. He completely disappeared, left his past life behind, to fully embrace his dark side, all while deeming himself a monster and unlovable. He despises himself and cannot fall deeper in this bottomless pit of pain and self-loathing, so he sees no trouble in also proving himself to be all that by becoming a trainer of kidnapped and stolen girls to be sold at sex slave auctions.

And Gianna – Gia – should be nothing but his next job, another girl in a long line, nothing special at all. But somehow, there’s something about her that makes her different, a nagging feeling that they have met previously.

Being the daughter of a mafia foot soldier, Gianna Castellano is no stranger to this world. She knows of the danger and darkness that is always lurking in the shadows. She is headstrong, not easily to be scared away and fierce – yet an air of innocence surrounds her. Her captor with the scary mask whom she aptly named ‘Death’ scares her, but still she doesn’t cower. He might be no hero, but she’s no wallflower either. She matches his dark and twisted crazy with her own, bringing out the piece of goodness – his humanity – that’s buried deep down in the process...

This story … nothing is ever as it seems to be, it has so many twists, turns and shocking moments that I’ve lost count. The intrigue. The danger. The drama. It’s as brutal, dark and suspenseful as it is gritty and raw. Gut-wrenching, intense and heart-stoppingly sexy. I could go on, but I’ll leave it at that.

Natasha Knight’s broken heroes truly are a force to be reckoned with. Each new character more broken than the last one, each story a bit darker than its predecessor. The kind of dark romance I will never get enough of.

And Michael Pauley’s narration – intense and raw, adding to the goosebumps-provoking feeling of the whole story. I don’t even mind his partially a bit over-exaggerated narration anymore. Somehow, it only complemented the story.

With regards to narration, I'm going to say what I said about Salvatore. Since this story is written in dual POV, I much would have preferred a dual narration as well. But Michael Pauley did a pretty good job narrating the female POV without making me cringe, so great job on that! Overall, I really enjoyed listening to him.

Natasha has turned me into a mafia romance junkie. I LOVED Salvatore, and after the ending I was dying to see what happened with Dominic. The story starts off many years after the end of Salvatore. Dominic starts of as the King of Ant-heroes. I really didn't like Dominic for the first part of the book. Seriously, the guy had ZERO redeeming qualities. So if you are looking for a story where the character has plenty of room for growth, you've found it! I certainly didn't ever really find myself thinking Dominic was swoon worhty or romantic, but he did grow on me and I did end up liking him in the end. So many unexpected twists and turns! Dark, clever and intense. Great story!

better than salvatore but very hard to read .

the scenes at the cabin are very disturbing to read. the love between the 2 was felt more than in salvatore.

this has to be one of the sexiest books I've ever heard. I also love Michael Pauley as a narrator so that helps. Whew, still fanning myself over here. This is not a light, funny, touchy, feely love story. It is raw, dark, hard and gritty. If hou aren't into those types of stories, you won't like this book. If you are, then damn, hold on to your ovaries, cause this man is going to make them quiver.

It was dark, emotional, heartbreaking and gripping. So intense between Gia and Dominic. It was also a tearjerker at times. Michael Pauley's voice is extremely husky in a sexual way. Love it!

I love both books.. Can’t wait to read then next one.. This book will keep you on your toes and wanting mor more and more

I enjoyed Dominic’s story much more than Salvatore!
Dominic is no hero, but I found myself falling in love with him throughout the book! The sex scenes were hot!!!! The narration was amazing.... now onto Segio’s story!

This is definitely not a hero style book. But one of deep emotions,dark realities but there is love and hope that rises from the ashes. You guys have to keep reading 😉