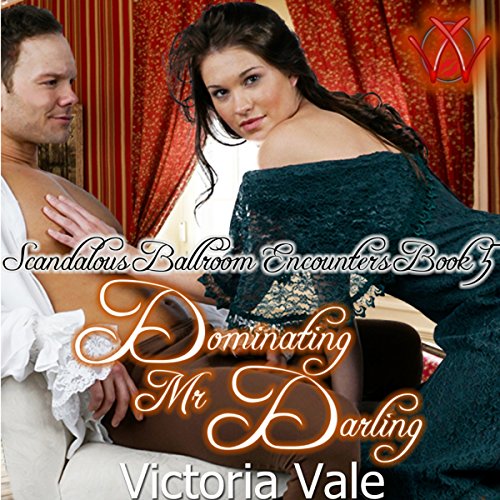 Lady Amelia Fitzwilliam is approaching her 30th year, and her umpteenth season without selecting a husband. Her elder brother is so concerned over this state of affairs that he's tripled her already obscene dowry in hopes that the coming season will finally see her leg-shackled. Opposed to the establishment of marriage to begin with, Amelia has no intention of giving up her freedom - or the taboo predilections she engages in behind closed doors. After all, what lord of the town would submit himself to a woman who enjoys subjecting her bed-mates to pain and domination for life? Since she has yet to meet such a man, Amelia contents herself with the long life of spinsterhood stretching out before her.

Michael Darling is a simple gentleman farmer, satisfied to live out his days rusticating in the country. He has no reason to run off to London searching for a bride - except for the matter of his dire financial straits. Debt has bled his coffers dry, leaving him with only one option: quickly find and wed a woman with an enormous dowry. When he encounters Lady Amelia Fitzwilliam in a gaming hell, the lady's reputation precedes her. A wager made over a card game will put her within his grasp, but the discovery of her peculiar tastes in the bedroom has him wondering if they could ever make a good match. Soon, Michael will realize that Amelia's domination appeals to him more than he would have ever dreamed, causing him to fall rapidly under her spell. However, a dark past comes with Amelia's tendencies, making her hard to woo and even harder to love. Never one to back down from a challenge, Michael sets out to untangle the convoluted puzzle Amelia presents and, hopefully, win her heart.

How did this guy get the job? He is so obviously reading. Didn’t anyone listen to this before putting it out there for purchase? Someone needs to spend more to get better narrators. I was frustrated through the whole book! When you’re so focused on the terrible narrative, it’s hard to concentrate on book. I will avoid his books in the future.

Robotic reading with an accent

The book was a good story by Vale but struggled to get through it because of the horrid narration. Was he actually human? I tried different speed settings to no avail.

Mistress Victoria have done it again! Written a masterpiece and a continuation of Submitting to the Marquis but this time about Amelia, Simon’s sister and her search to escape her past and find her future with a suitable husband. She is taken by surprise when she meets a certain Mr. Darling in London... The narrator has a voice which is built for sin, and fits the role of the males in Mistress Victoria’s stories about the Fitzwilliam siblings, beautifully! His narration as Simon Fitzwilliam and Michael Darling is to die for! I can recommend this story very HIGHLY! The story is sensual and highly satisfying! Congratulations Mistress Victoria on yet another gorgeous story!

Get a new narrator!

Get a narrator that can pronounce regency words correctly and doesn’t sound like a robot. This is worse than if Alexa or Siri read you a book. Just ruined the story. Couldn’t finish it

I never thought I would enjoy the DBSM with a Mistress, but this was a very good book. The narration was soo good with this book, as was the story. Mr. Darling is on a journey to find a wife, not just any wife, a wife that has a large dowery. Mr. Darling is not really a fortune hunter, but his farm and it's tenants are struggling. He does have a wife in mind Amelia is such a woman.. however, unbeknownst to Mr. Darling.. she's a Mistress... He's in for a surprise. Amelia is not looking for a husband, but she does fall for Mr. Darling. This was a really good book I was given this free review copy audiobook at my request and have voluntarily left this review.

I love listening to books with a British accent and absolutely love the Scottish burr. I am so glad she got a great guy. I enjoyed it very much.

Mr. Darling because you just make your males sound so romantic and hot.

Have you listened to any of Simon Phillips’s other performances before? How does this one compare?

I have listened to so many different men read and all I can say is he is one of my favorites.

when she realized his mother and sister accepted her for herself.

Great story generation was a lot better in this book than the last one or maybe I just got used to it but the book was so amazing I didn’t even think about it until now. The writer did a fantastic job with this series.

I loved this love story!

This so far s my favorite of the series! Lady Amelia finds herself married to Mr. Darling! The beautiful younger sister of Simon! This was such a beautiful love story! Lady Amelia marries a handsome man who accepts her, helps her heal and they fall in Love! I cried while reading this! It's so well written and as always, steamy love scenes! I love the Narrator English accents, how reads the book like an actual movie! I Love Victoria Vale, she is amazing! I highly recommend this book and it's series ♡

Unique and super sexy - this was perfect! Narration was really well done! I was given this free review copy audiobook at my request and have voluntarily left this review. The fact that I was gifted this book had no influence over my opinion of it.