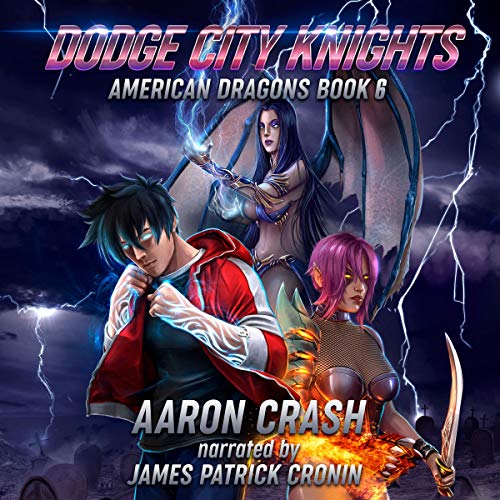 Steven Drokharis is on an impossible quest to find the Holy Grail. The Dragonknights came close, but then their ranks were decimated by the mysterious Dragon Slayer, a legend that still fills Primes with terror. Standing in Steven’s way are ancient forces that have been waiting for the Lost Son and Merlin’s Daughter to continue the hunt. And yet, war has come to Steven’s doorstep, and he must balance defending what he’s earned with his greater ambition of bringing revolution to Dragonsouls everywhere.

Once again, Steven must gather his allies while his enemies across the world conspire to destroy him. And the greatest villain might be in his own ranks. Tessa stands on the razor’s edge of good and evil, tempted. Can Steven and the beautiful women of his Escort save her very soul?

Or will Tessa murder the last of the Dragonknights before Steven can unearth the ultimate weapon?

Disclaimer: Dodge City Knights: American Dragons, Book 6 is a shoot-em-up, action adventure, urban fantasy novel which is not intended for listeners under the age of 18. This novel contains swearing, violence, and a harem of beautiful shape-shifting women that the hero regularly sleeps with - and he does so gladly.

FOR THE LOVE OF BISCUITS, GET A NEW NARRATOR!

Steven and his escort are truly bad M-Fers I love the twist on king author tale and the magic and other skill trees and of course the way they all power up!

In this volume Steven goes after the last remaining dragon nights And these are the knights that have seen and witness 1st hand the power And brutality of the shadow and Talon And what does Steven do he kills them off Most people would say he's justified or he didn't have a choice because they were trying to kill him I see it from this point of view You're about to raise hell and going to battle would I enemy that you only hear stories about never seen and only read about These knights battle them before Wouldn't make sense to save or try not to kill them so when you do Go into battle You have some knowledge on what you're facing Maybe get a back story Not for just Steven but for the reader is well But heck even Steven knew how over powered he was and he probably knew he wasn't gonna get killed at the end of the story anyway so he probably didn't care.Like many when I 1st read this I was like all damn you know I fell good for Steven but when I came back and read it over and over then I realize I'm like wait a minute you could have use them many opportunities missed so far in this series me the entire series is this in a nutshell I'm not hating on a just a for the sake of being a hater I'm hating honest is because so much potential Could have gone into the story making it even better Look I know this is a Harem series and I know for most of us we're here for the sex but that does not excuse the fact that you can't have a good plot a good story here A good world building opportunity you got it here But if you're interest just are sit there and you know make us horny hey good job👍

Once again an excellent book with great progression along the storyline. I love these characters and the way they are growing! The narration is excellent and I just can’t wait for the next audiobook! But I guess I will!

This entire series has plenty of action. I like the growth of the characters. This book has had a little more action than others. The narrator does a good job giving the characters a voice.