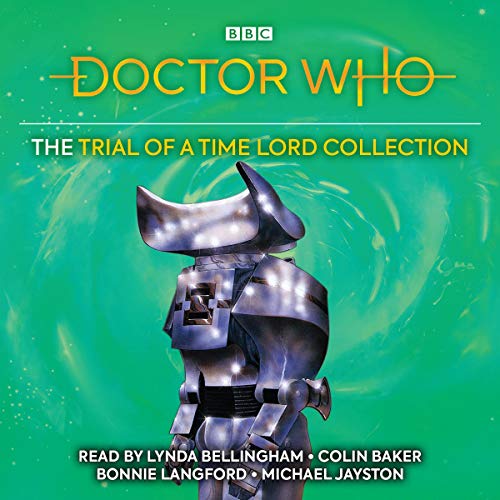 Doctor Who: The Trial of a Time Lord Collection

Four exciting novelisations in which the Doctor is on trial for his life.

In The Mysterious Planet, the Doctor is brought before the court of his fellow Time Lords. If the Valeyard can prove him guilty, the Doctor must sacrifice his remaining regenerations.

In Mindwarp, the second piece of evidence against the Doctor is presented to the court. One thing is certain: on the evidence of the Matrix, the Doctor is guilty as charged!

In Terror of the Vervoids, the Matrix relates how the Doctor and Mel arrive on a space liner just as a series of grisly murders begins.

In The Ultimate Foe, the Doctor asserts that the evidence of the Matrix has been tampered with. In a dramatic intervention, the Valeyard's true identity is revealed....

Misleading NOT a (new) "novelisation".

Pre-ordered this based on the misleading description "6th Doctor Novelisation". Mistakenly thought it was a *new* release with an updated/expanded revision similar to Shada, City of Death, Pirate Planet, etc. Also incorrectly assumed that since Colin Baker was listed as one of the narrators, thought he would be narrating the part of the 6th Doctor throughout the entire release, but was mistaken.

As I was expecting a "15 hour release (novelisation)" and not merely a repackaging of four existing titles, will be returning this. Nothing wrong with the release, just not was I was expecting. Ex: Am also keeping an eye on the the release "Doctor Who: The TV Movie" (not to be confused with "Doctor Who: The Novel of the Film") which I am guessing to be a "new" release and not a reprint of the 1996 release and previous audio release,etc.