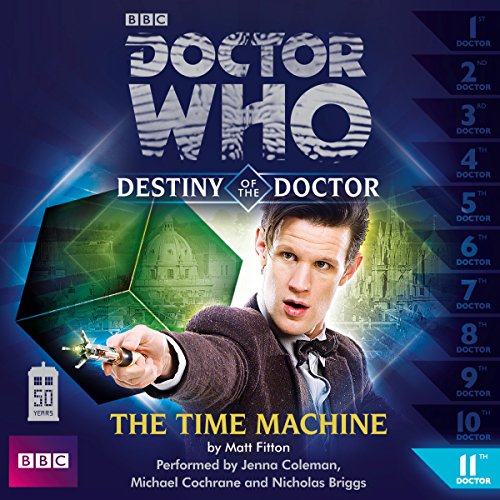 Doctor Who - Destiny of the Doctor - The Time Machine

The scientist and his assistant believe they are making history, little suspecting that the project's completion will threaten the existence of the entire universe. But someone has sensed the danger, and when the mysterious Doctor arrives, Alice is taken on a desperate race from libraries and dreaming spires all the way to the nightmare world of Earth's future.

The monstrous Creevix are coming. They seek control of time itself and are certain that the Doctor is already too late to stop them. But can the key to saving the future lie in the Time Lord's past lives?

Written by Matt Fitton and directed by John Ainsworth.

I wish Jenna Coleman would narrate more books. It was almost the same as watching a Doctor Who episode,vwith a little hint of H. G. Wells, because you're reading it. overall audio performance was 20 out of 10.

In all honesty, I was only attracted to this story because it was narrated by Jenna Coleman. The ending felt a bit rushed and new Whovians might not get the references, but it’s worth repeating.