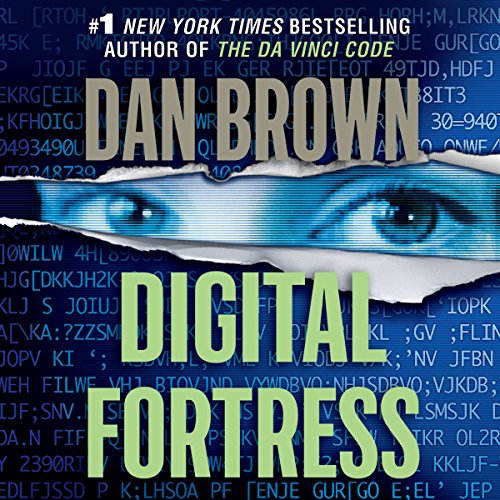 When the NSA's invincible code-breaking machine encounters a mysterious code it cannot break, the agency calls its head cryptographer, Susan Fletcher, a brilliant, beautiful mathematician. What she uncovers sends shock waves through the corridors of power. The NSA is being held hostage, not by guns or bombs, but by a code so complex that if released it would cripple U.S. intelligence. Caught in an accelerating tempest of secrecy and lies, Fletcher battles to save the agency she believes in. Betrayed on all sides, she finds herself fighting not only for her country but for her life, and in the end, for the life of the man she loves.
©1998 Dan Brown (P)2004 Books on Tape, Inc.
Espionnage Suspense Technothrillers
Afficher plus Afficher moins

"In this fast-paced, plausible tale, Brown blurs the line between good and evil enough to delight patriots and paranoids alike." ( Publishers Weekly)
" Digital Fortress is the best and most realistic techno-thriller to reach the market in years...A chilling thrill a minute." ( The Midwest Book Review)
"Exciting...will rivet cyber-minded readers." ( Booklist)

I enjoy reading Dan Brown; I find his books are based on interesting ideas and concepts, and Digital Fortress is no exception.

I noted in my review of "Angels and Demons" that Brown's story-telling improves between that book and "The Da Vinci Code". "Digital Fortress", written before "Angels and Demons" further proves that sentiment. Heather from Fullerton's comment that it's "not quite as sophisticated" is spot on.

The book starts off well enough, and it was ticking along fine until towards the end, when the characters - and therefore the story line - seemed inexplicably struck dumb.

I read this book basically because it's written by Dan Brown, and I was curious to see what else he has written; as I said off the top, I find the ideas and concepts he writes about quite interesting.

But if you're debating whether or not to get this book, I would say spend your money on something else - even another (later) Dan Brown book!

Do Not Read This Book...It is Terrible

Let me begin by stating that I have never before written a review for any book, and I have listened to many. However, "Digital Fortress" was one of the worst books that I have listened to in a very long time, so I wanted to warn other readers to not waste their money or book credits. I could not believe that this was the same writer who created the Davinci Code, which was intelligent and clever. In stark contrast, Digital Fortress had a completely predictable plot and the writing was very poor. Much of the book is the characters saying the same thing over and over again, to the point of the annoyance of the reader. As predictable as the overall plot was, the ending was even more so. Avoid this book if at all possible!!

Don't read what you know

Let me start by saying that I really enjoyed Da Vinci code and its prequel, so I was optimistic about this read. Unfortunately, I was horribly disappointed. I am not sure if the culprit is Mr. Brown's lack of knowledge about this subject (compared to the subject matter of Da Vinci) or my relative depth of knowledge about it (I happen to run data centers for a living) but I was extremely disappointed in the book.

The characters were interesting and the basic concept to start with was OK, but from there it degenerated rapidly. By the end of the book I was figuring things out quicker than most of the characters (always a bad sign) and the majority of the plot line had become completely unbelievable. As with all techo-thrillers, the bottom line is that when the machine is run-amok or in horrible danger... simply turn the thing off. Since this solution is so elegantly simple, writers from Asimov to Star Trek have been inventing convulted ways to keep their machines from being turned off, and even more convulted reasons why those mechanisms would be built. Just in case Mr. Brown decides to write in this genre again, here are some good rules of thumb:
1) Rule #1 of data center design - The EPO (emergency power off) is always located at a controlled and secure location near the exits (there can be multiple, after all) to the data center... not 3 stories below the data center in some goofy catacombe of generators and cooling equipment.
2) Rule #1 of computer system design - If your $3 billion computer runs so hot it can explode... put a $10 temperature sensor in it so it can shut itself down to keep that from happening accidentally.
3) Rule #1 of being an international assassin - silencers don't work very well on revolvers, sound escapes from between the cylinder and the barrel.

One of the worst books I've ever read. The technological background is not weak, it's ridiculous. Anyone that has a minimum understanding of software engineering will find difficult to finish the book. Cryptography-related descriptions and explanations are childish. The plot is paper-thin, character motivation is unbelievable...

National security, international intrigue, ideal love, unrequited love, computer genius, insane genius, and code puzzles are all glittering threads in this luminous tapestry woven skillfully by Dan Brown and brought to life by the impressive vocal characterizations of Paul Michael. Written several years prior to The Da Vinci Code and not quite as sophisticated, Digital Fortress is nonetheless an elegant creation and a satisfying entertainment.

I wish I had read the other reviews before buying this book. I'm a fan of Dan Brown's other books but this one is pretty bad for all the reasons mentioned in the other reviews. If you know anything at all about computers or math, turn your brain off as you read.

Btw if you do manage to get through the book, do yourself a favor and skip the last half hour or so. Reading the painstaking walkthrough of a google search and all the breathless "deductions" the characters go through nearly drove me to a life of crime.

If you know ANYTHING about computer science then you'll need to be able to COMPLETELY suspend reality in order to enjoy this. I was not able to.

This is a pre-DaVinci Code novel, by Dan Brown, which centers around a deadly virus which has infected the National Security Agency's Data bank, and thier code breaking behemoth 'T.R.A.N.S.L.A.T.O.R.' His main character, Susan Fletcher, is the head cryptographer for the NSA, and is called in on a Saturday by her boss, The Deputy Director of the NSA, Trevor Strathmore. Turns out that Strathmore ran a computer algorithem, in an attempt to see if their decrypter, TRANSLATOR, could decipher it. The algorithem was called Digital Fortress, and problem is that this algorithem has a purpose, which is to destroy the protective filters guarding the NSA Databank. Strathmore relies on Susan to find the identity of a mystery man, who has the key to stop the coming disaster. This is vintage Brown! Like his other books, Digital Fortress takes place in the course of a 24 hour period. There is a Dan Brown guarantee which insures the reader that the NSA does exsist. There is an assassin (Hulahot), a love interest (David Becker), suprise heroes and villians to spare, and the fast paced action that Brown fans have come to expect. This is a must read for fans of Dan Brown, or if you are in the mood for a fast paced thriller!

Da Vinci Code was always tantalizing - it kept you starting the new chapter. This book is so predictable that it is tiresome. I listened to the unabridged version in honor of Da Vinci Code. What a waste of my time. Save yourself the aggravation. The final code was so obvious I predicted it as soon as I read the description of the riddle. Then the most brilliant cryptographers in the world spent pages trying to solve it. Boring. Brown is trying to be too cute and has no new tricks in this book.

Although some have gave this book a poor rating - the book is not that bad. When you have read enough books the plot in this was easily solved and not much guess work; however the story was good and still enjoyable. It kept my interest and that's important.

exciting and not too irreal

This book is highly recommendable as it contains a very exciting, but still rational story and holds its grip on the reader! The course of events keeps moving faster and faster till the end (as most Dan Brown books do :-)).The story treating communication technology justs rather shows reality and not far away future...

It sounds like a robot is reading the book to me, really put me off.