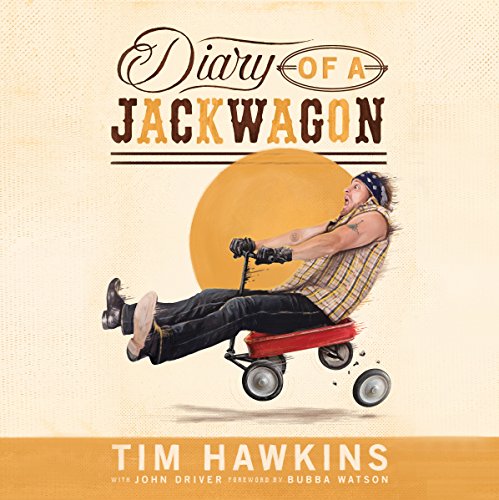 Diary of a Jackwagon

He's a comedian. He's a YouTube sensation. And now he becomes an author. Best known for his song parodies and riffs on yoga pants and homeschooling, Tim Hawkins now shares his perspective on life in the 21st century in his long-awaited debut book. Tim's topics are as wide-ranging as his stand-up comedy, including marital communications ("Marriage needs a challenge flag, like in pro football"), worship music ("Pick the right key, because I'm not Barry White and I'm not a Bee Gee"), and food ("Eating a Krispy Kreme donut is like eating a baby angel"). Diary of a Jackwagon reveals a witty and relatable voice reminding listeners that for life's many difficulties, laughter is always the best medicine - when there aren't any pills left.

Tim Hawkins is so hilarious, and it's nice that even if your kids probably wouldn't get some of jokes because they relate to things that happened before they were born they can still safely listen without anyone worrying about curse words or inappropriate content.

Tim has the ability to say what most of us think I'd never do get the gumption to say. Very funny man! And blessed to see his show twice and well worth the money.

We love Tim Hawkins! We listened to Tim in car to laugh as a family. So thankful that a Christian man can make people laugh without being crass! Well, at least not using traditional cuss words.

Great for biking and sleeping to

Tim Hawkins is one of my favorites, listening to his “diaries” mad my long commute to work much more tolerable.

TIM HAWKINS, YOU JUST GOT MARAGED-MASHED.

Yah,like you'll think... if what your thinking is comedy gold mine!!!I just like the humerus guy with the six-pack talking,he is soooooo good.

Tim Hawkins delivers funny comedy that the whole family can enjoy. I recommend this book.

Family of 5 ALL LOVED IT!

We laughed our butts off listening to this hilarious book throughout our long family road trip. We have seen most all of Tim’s shows but the book had little unexpected nuggets of hilarity that had us laughing so hard I though maybe my husband should pull over so he could take a breath! Thanks Tim!

I must look crazy when listening and driving! Laughing out Loud! Not the worst look!

Super funny Tim's jokes never get old. Narration was awesome. I really enjoyed all the stories.