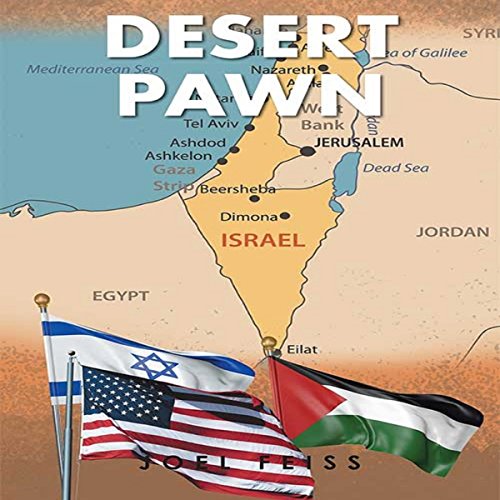 Desert Pawn is a contemporary, character-driven mystery that begins with the kidnapping of Mary Ann Berman, an American newlywed honeymooning with her husband, Dr. Daniel Berman, in Eilat, Israel. Shoshana Rich and Yonah Ferreres are the Shin Bet lead investigators who are charged to rescue Mary Ann and capture the perpetrators. In the backdrop of Israel's high stakes conflict with Palestinian fundamentalists, the investigators have many problems to solve. Who are the kidnappers? Is Mary Ann still alive, and if she is, where is she being held? What ransom are the kidnappers going to demand? Would Mary Ann's family or the United States break protocol and pay a ransom? The investigators are led through a series of twists and turns that involve the political and historical relationships between Israel, the United States, and the Hamas-led Palestinians.

Post WWII politics in the Middle East remain a quagmire of hate, distrust, greed, politics, and religious fanaticism. When a honeymooning bride is kidnapped outside her hotel in Israel, all these factions come into play and we are treated to a history of the area which brings into focus the modern situation while enjoying a thriller that would play well on the big screen. Well-narrated by Ann Simmons, I found the story engrossing.

While the story was good and entertaining, listening to it being narrated by Ann Simmons wasn't a good experience. I think I should've just read the book in Kindle format.

The story is set in the political hotbed of Israel where a woman gets kidnapped and the intelligence apparatus are trying hard to prevent this from becoming another source of unrest in the region. The writing is crisp and keeps you mostly on the edge of your seat. There are lot of facts mixed in with the fictional story, which I find really irresistible. This was reminding me of Tim Kring's tv show Dig. If you had liked that show, you probably would love this book. Get the Kindle version though.

The narration was pretty poor. Ann didn't sound interesting in telling the story and mostly droned on without conveying any emotion or voice inflection. It took away all the positives of the book and constantly pushed towards getting the kindle version instead.

I received this audiobook for free from the author / narrator / publisher in exchange for an unbiased review.

This was a good story, just a bit slow for my tastes. The narration was okay. I received a review copy at my request and voluntarily reviewed.