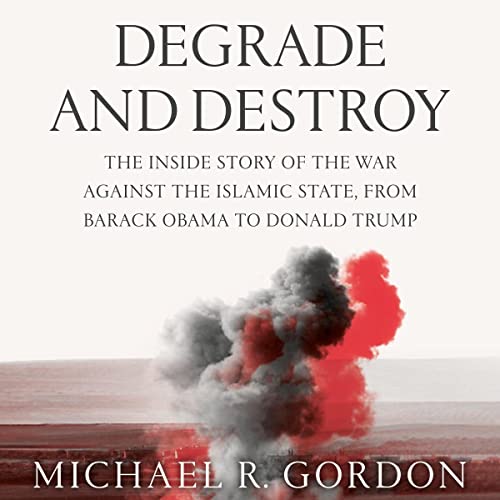 An essential account of the struggle against ISIS—and of how Presidents Obama, Trump, and Biden have waged war.

In 2014, President Obama overcame his long-standing aversion to large-scale military action in the Middle East and took the United States to war against the Islamic State. Assembling a coalition of regional and European allies, the US military began a massive bombing campaign and returned its advisers to Iraq. Today, ISIS remains gravely diminished. But is the war really over?

In Degrade and Destroy, Michael R. Gordon, the bestselling author and Wall Street Journal national security correspondent, reveals the debates, diplomacy, and military strategy that have shaped the struggle against the Islamic State. With extraordinary access to the White House, the intelligence community, and top generals, Gordon offers a riveting narrative like no other. We see Hillary Clinton plotting to arm the Syrian rebels over the president’s objections; her Pentagon colleagues attempting to plan a war even as Russia, Turkey, and Gulf allies complicate or frustrate every move; and Kurdish fighters battling house to house. Gordon also offers the most detailed narrative we have of how President Trump waged war—giving his generals greater freedom to make their own decisions while practicing diplomacy in a haphazard and sometimes self-sabotaging manner.

Degrade and Destroy is the definitive account of a major US military conflict that has not been recognized as such, and the tentative victory that was achieved. With the region in disarray, Gordon’s stark account raises a crucial question: The United States and its allies may have won a war, but will they once again lose the peace?