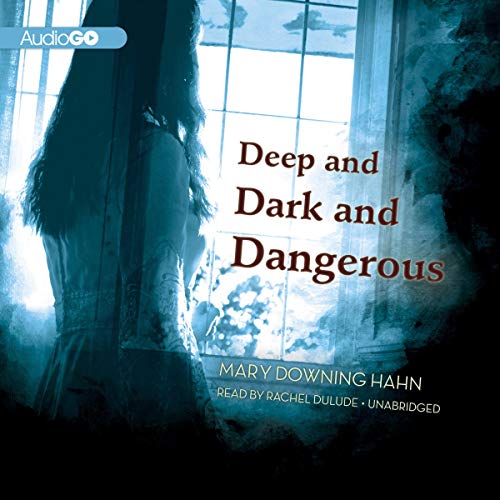 Deep and Dark and Dangerous

Just before summer begins, 13-year-old Ali finds an old photograph. She recognizes the two children in it; one’s her mother, the other her aunt Dulcie - but who is the third person, the one who’s been torn out of the picture? Ali will have two months to figure it out, since she’s spending the summer with her aunt and her cousin in the same house her mom and aunt used to visit when they were kids.

Then Ali meets Sissy. Sissy is mean, spiteful, and determined to ruin Ali’s summer. Sissy also has a secret. Could it have something to do with the old photo? Ali is dying to find out - though, if she’s not careful, that may be exactly what happens to her.

“Hahn weaves into the story some classic mystery elements such as a torn photograph, a waterlogged doll, dense fog, and an empty grave, all of which add to the suspense and keep the well-plotted story moving along to a satisfying conclusion.” ( School Library Journal)
“Hahn offers another eerie, suspenseful ghost story filled with family secrets…the emotional weight of family dynamics and the private burdens of adults might have overwhelmed the ghost story, but Hahn maintains the momentum with scenes that will chill readers as surely as a plunge in cold water.” ( Booklist)
“Signature spooky Hahn sends appropriate shivers up the reader’s spine.” ( Kirkus Reviews)

Where does Deep and Dark and Dangerous rank among all the audiobooks you’ve listened to so far?

In the upper 30% - and I have listened to hundreds of audio books.

What was one of the most memorable moments of Deep and Dark and Dangerous?

The canoe ride into the lake.

Have you listened to any of Rachel Dulude’s other performances before? How does this one compare?

This is the first of Rachel Dulude's performances I've listened to.
I had to admit it, but I typically dislike listening to female narrators. Rachel Dulude did a very good job with this book and it was a pleasant experience.

Such a good book!!

I would recommend this book to ANYONE, not just children. Mary Downing Hahn has always been a favorite of mine ever since I was a child.

I love this book and this is what brought me back to reading i was in 7th grade when I first read this and now I’m in 9th I never thought reading was fun at first but then I my friend gave me this book and I thought I was ok at first but then when I got into it I was so amazed and thirsting for more. I read this book everyday and class and even got in trouble for it but I didn’t care as long as I had this book in hand. This book was amazing and now I love to read I want to think the author I’m guessing u probably think I’m ether 16-19 but actually I’m 14. So thank you for inspiring me to read.

I kept trying to hang on, but after 3 1/2 hours of listening, I had to stop. Yes, there is a small mystery. But...it’s just so slow moving. Focused mainly on kids interactions and as an adult, I find that not very interesting. Tantrums, bullying, whiny behavior. Glad it was free.

I don't mind YA, but even youths shouldn't have to endure mediocre writing. Repeatedly repeating the same phrases is repetitive.

a ghost story with a moral

This is supposed to be a story for teens and young adults but to me it was a sophisticated tale with a deeper meaning. I really enjoyed it and it kept my interest throughout.

Not a horror ghost story. It is about a young girl who died from a terrible accident looking for closure.

Ive always Loved Mary Downing Hahns books and this one is one of my favorites! The voice actress did a fantastic job! Overall great to listen to and would recommend it to anyone who loves a good ghost story!

I began rereading this book after moving out of my childhood home and finding it with a stack of my favorite things. I was on chapter 8 reading to myself. But tonight I wanted to close my eyes and listen as someone else told me the story. I couldn’t be more disappointed. I understand Ali is somewhat cold in tone but this reading didn’t even capture her feelings, something I recognize when I read it myself. First audible book I’ve tried and I can’t believe it ruined my favorite childhood story.

LOVED IT. The narrator did an excellent job bringing one of my favorite childhood books to life!!