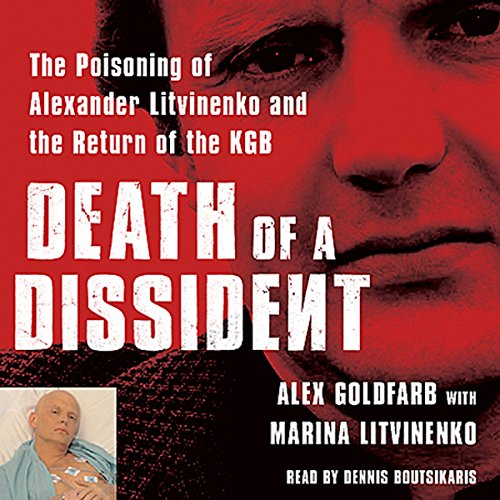 Death of a Dissident

The November 2006 assassination of former Russian intelligence officer Alexander "Sasha" Litvinenko, who was poisoned by the rare radioactive element polonium, caused an international sensation. Within a few short weeks, the fit 43-year-old lay gaunt, bald, and dying in a hospital, the victim of a "tiny nuclear bomb". Suspicions swirled around Russia's FSB, the successor to the KGB, and the Putin regime. Traces of polonium radiation were found in Germany and on certain airplanes, suggesting a travel route from Russia for the carriers of the fatal poison. But what really happened? What did Litvinenko know? And why was he killed?

The full story of Sasha Litvinenko's life and death is one that the Kremlin does not want told. His closest friend, Alex Goldfarb, and his widow, Marina, are the only two people who can tell it all, from firsthand knowledge. With dramatic scenes from Moscow to London to Washington, Death of a Dissident reads like a political thriller, yet its story is more fantastic and frightening than any novel.

Death of a Dissident opens a window into the dark heart of the Putin Kremlin. With its strong-arm tactics, tight control over the media, and penetration of all levels of government, the old KGB is back with a vengeance. Sasha Litvinenko dedicated his life to exposing this truth. It took his diabolical murder for the world to listen.

Putin is a dangerous man, beyond what most people understand of know. A must read given today's political environment.

Not looking hard enough at who

Overall enjoyed reading this book and remember when the story was on the news. Overall, Litvinenko was a target since Turkey in 1993 is my feeling talking to US consulate was why. 1993 was a time where Russia had problems with KGB and GRU exchanges and turn coating. The father and daughter in park in UK would be another example, of the idea that Russia has “everyone is a trader to London”. As for Litvinenko look no further then 1993; Palmetto Luxury hotel deal in Greece; Yuri & Artyom Chaika into Kavtun at orders of Putin as an explanation. It would have taken that long to get “Tang”tasting tea.