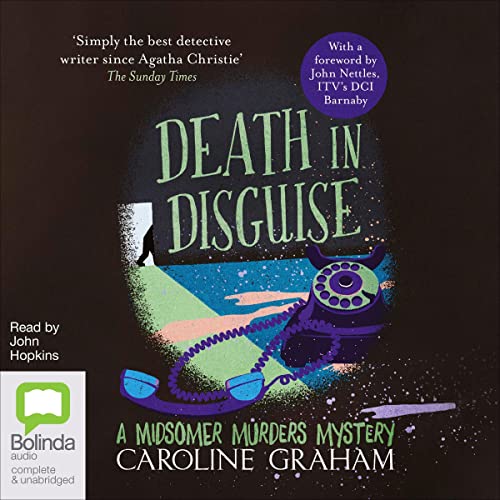 To the distaste of the Compton Dando villagers, the big house has been taken over by a group of New Age eccentrics. And when the first death is reported, no one is surprised...or disappointed. The coroner rules it an accident.

But only weeks later, there’s another death. And this time, it is murder.

Detective Chief Inspector Barnaby is called to the scene immediately, and there’ll be no escape until he has sifted through the world of psychics, cult leaders and horrifying deaths to get to the cause of it all.

Tedious at first, but hang in there

I enjoy character setups, books taking time to set the scene before a murder takes place. I don't care if the crime does not occur until the middle of the book. The problem with this story. for me, is in the beginning, I did not care for the characters, and the description somehow seemed boring. Once the murder takes place, the story picks up and becomes quite entertaining. By the end of the book all is explained, and while i liked the wind up, I never liked the main cast of characters. Still, I would recommend the book and I liked the narrator.

good narration, but I struggled to finish. I only hung in there because I liked the 1st and 2nd books.

A disappointing outing in the series

This was less a mystery than a social satire. As a satire. it was not terribly interesting because the characters were fairly shallow. The actual investigation doesn't start until halfway through. I have enjoyed other books in this series, but not this one.

Icky characters, gave up and forwarded to after the murder. Way even the main characters were depressing.

Midsummer murder who did it?

Very well written. John Hopkins is the perfect voice for Ms Graham's murders. I liked the fact that all the stories of each individual character are wrapped up for us in the end. Kept me wondering who done it until the end.

John Hopkins does a fantastic job narrating this series. The story takes place on a commune in a large home, where silly mystics mix with those who are truly seeking a peaceful existence. The only quibble here is the books are showing their age a bit--with some sexist workplace language and scenarios that would never be accepted in a book written today. But I put this and the others in the series squarely in the cozy and fun murder mystery genre. Good fun.

The only reason I managed to plough through the first third of this book is that the first two novels in the series were so good. At some point I actually briefly skipped ahead to make sure that Barnaby would show up eventually. Taken as a whole the book wasn’t bad, but I just didn’t care about the characters and their bizarre thoughts and lives, so it could be tedious—sometimes more, sometimes less.

One character almost ruins the book

I really dislike the Troy character in the book. The rampant homophobia and misogyny truly take one out of the story. If it was balanced with some redeeming qualities then it wouldn’t be so bad, but his character is so one-sided as to be a caricature instead.