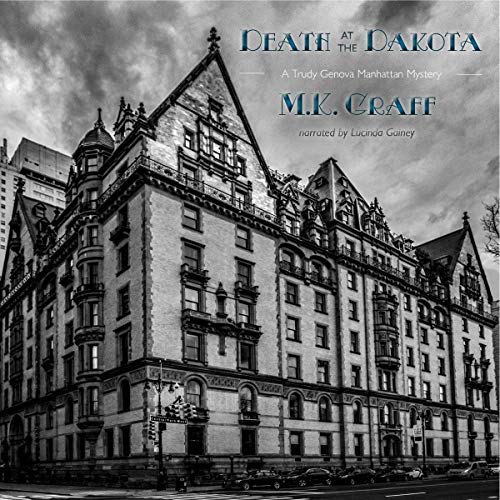 Death at the Dakota

Nurse Trudy Genova is making plans to take her relationship to NYPD detective Ned O'Malley to the next level, when she lands a gig as medical consultant on a film shoot at the famed Dakota apartment building in Manhattan, which John Lennon once called home. Then, star Monica Kiley goes missing, a cast member turns up dead, and it appears Trudy might be next. Meanwhile, Ned tackles a mysterious murder case in which the victim is burned beyond recognition. When his investigations lead him back to the Dakota, Trudy finds herself wondering: how can she fall in love if she can't even survive?

Listeners of Death Unscripted, the first book in the Trudy Genova Manhattan Mystery series, will find the same pleasures in this sequel: fast pacing, engaging characters, twists, and turns on the way to a satisfying close. From the award-winning author of The Nora Tierney English Mysteries, this second series is a winner. Once again M.K. Graff reveals her talents in crafting this delightful mix of amateur sleuth and police procedural.

"I fell in love - not only with co-protagonists, Trudy and Ned, the richly detailed and historic setting of the Dakota, and the unique cast of characters, but with the unusual plot of Death at the Dakota." (Sherry Harris, Agatha Award nominated author of the Sarah Winston Garage Sale Mysteries.)

Love the clever web M.K. Graff weaves in Death at the Dakota. Narrator Lucina Gainey has smooth tones and is easy to listen to - which helps with the quick pace set primarily through lively dialog. I listen for entertainment and this audio book delivered!