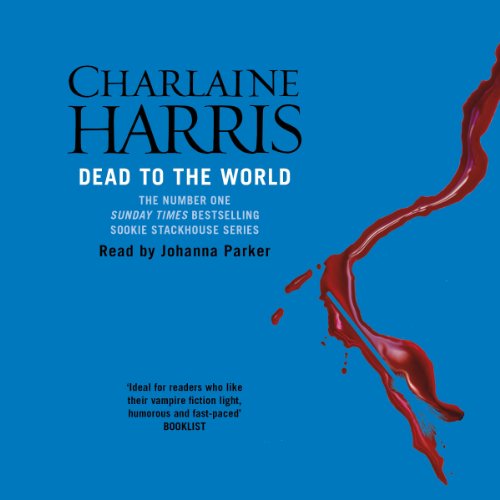 Dead to the World

Sookie comes to the rescue of a naked, amnesiac vampire - and ends up in the middle of a war between witches, werewolves and vampires!

Sookie Stackhouse is a small-town cocktail waitress in small-town Louisiana. She's pretty. She does her job well. She keeps to herself - she has only a few close friends, because not everyone appreciates Sookie's gift: she can read minds. That's not exactly every man's idea of date bait - unless they're undead - vampires and the like can be tough to read. And that's just the kind of guy Sookie's been looking for.

Maybe that's why, when she comes across a naked vampire on the way home from work, she doesn't just drive on by. He hasn't got a clue who he is, but Sookie has: Eric looks just as scary and sexy - and dead - as the day she met him. But now he has amnesia, he's sweet, vulnerable, and in need of Sookie's help - because whoever took his memory now wants his life.

Sookie's investigation into what's going on leads her straight into a dangerous battle between witches, vampires and werewolves. But there could be even greater danger - to Sookie's heart, because the kinder, gentler Eric is very hard to resist.

Loved this story. Easy listerning and very entertaining. Will be impatiently waiting for any new books in audio from this author.

Love all of these books

This series is my favorite of my books. It keeps you wanting more and more. A definite must read for all Vampire fans. Just excellent and the Narrator is excellent.

Best book in the Sookie Series!

This story is one of my favorite in the entire Sookie Stackhouse Series. The chemistry between Sookie and Eric is outstanding! There are so many different plot twists and mysteries going on throughout, it is never dull. Eric having his memory temporarily erased allowed us to see a completely different side of him that was not only intriquing,but lots of fun! He relies on Sookie almost as if he were a child, and given Eric's typical behavior,seeing this type of behavior from him is particularly amusing!

If you are a fan of the series then this story will DEFINITELY not disappoint!

The novels are always so hilarious. I find myself laughing out loud so many times (the HBO series is darker and more thrilling). Charlaine Harris and the narrator Johanna Parker make a dynamic duo that will keep you listening and wanting more.

As expected, the inevitable happens in the book (sorry, I'm not giving you spoilers but you'll know when you see it). Interestingly, this kinda disappointed me (I mean was it a bit tacky or was it just me?). Another thing is the main witch-related plot. I'm sorry, it was plain boring for me, especially the so-called 'climax.' Ok, end of nagging. Though this is my least favourite part, I can still recommend it as a good read. Johanna Parker always saves the day for me.

My favourite so far

This is my favourite Sookie Stackhouse book so far. More great characters from the supernatural .... and a starring role for Eric!
I can't separate these stories from the great narration by Johanna Parker. She really makes the characters live.

See my review for Dead as a Doornail

What did you love best about Dead to the World?

That I turned it off.

What was one of the most memorable moments of Dead to the World?

None in the audiobook. The narrator detracted from it too much.

Oh yes. She is a great narrator as long as she isn't trying to do men with accents...or men. Or even southern women.