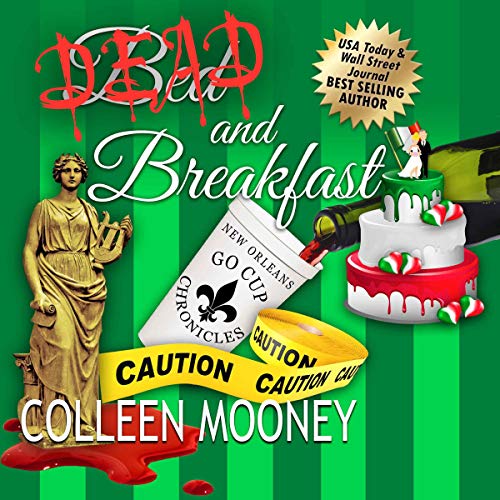 Dead in bed? Who you gonna call?

Good Catholic school girl that she is, Brandy Alexander’s a true and trusted friend, not to mention something of a detective. So, when Brandy’s best friend Julia, the ex-stripper-turned-hotelier, finds her first guest covered in blood, lying half on and half off a broken bed, with Julia’s panties swinging from the chandelier, she gets Brandy on the horn.

Cool-hand Brandy assesses the situation and carries out the only sensible course of action: First, she makes a pot of coffee, then she calls the police. Brandy then finds herself in a big, fat, pouffy-skirted Italian wedding! While Brandy enlists the help of her new beau, Jiff, to try to keep Julia out of the slammer, Brandy’s oldest school chum is getting married, and with 18 bridesmaids, Brandy can’t escape being recruited and partnered with...who else? Her favorite upstanding member of NOLA’s finest, Dante.

The suspense mounts, romance blossoms, and Jiff, a hundred percent class act, is looking more and more like Mr. Right with his own Schnauzer and a soft spot for Brandy’s three. But Dante makes it clear that he doesn’t plan to go quietly. The former Mr. Right Next Door has a few very sexy moves he’s been holding in reserve, which knock Brandy’s socks and her panties off!!

With this one, Brandy’s fast becoming a female sleuth extraordinaire with a big, easy flair, and cozy fans will be delighted to find her humor and style a bit reminiscent of Janet Evanovich’s Stephanie Plum. Fans of Stephanie Bond, Jana DeLeon, Joan Hess, Lisa Lutz, Sarah Strohmeyer, and Elaine Viets may also find a kindred spirit in this New Orleans dawlin!

This is book two in the series, The New Orleans Go Cup Chronicles, and the first I have listened to or read. I have seen it listed as a cozy mystery but I would not place it there due to a few steamy scenes.
Other than those scenes, the book did follow the cozy format.

The narrator did a wonderful job.

I really feel for Brandy in respect to the wedding preparations. I can totally sympathize with her on hideous dresses, headgear, and dyed shoes. I have never understood why bridesmaids are expected to spend lavishly on outfits that are ugly (or at least not to their liking) and will probably never be worn again.

The murder in question is of a band member staying at Julia’s B & B. Julia is the number one suspect. Who is Violet- were is she, did she commit the murder? If not, then why can’t she be found?

I’m not a fan of love triangles and I can see the situation between Brandy, Jiff, and Dante going in that direction. I can only hope it does not drag on through too many books or I will begin to resent Brandy for leading them on. I can understand her needing time to figure out who she is interested in seeing and getting to know in a romantic sense.

I would recommend this romp through New Orleans and the catholic Irish Channel district.

What will Brandy do with two hot men?

Dead and Breakfast is Book 2 in the New Orleans Go Cup Chronicles by Colleen Mooney. Brandy Alexander is a good Catholic girl and she has some interesting friends. Her best friend since Catholic School is Julia. Julia is a former stripper, who married, is now a widow, bought a Bed and Breakfast, and...drum roll please, has her first guest dead in a broken bed with Julia’s and his bloody clothing everywhere in the room. WOW! I did say Brandy has interesting friends. Dante arrested Julia and Jiff is representing her. Dead and Breakfast has so much drama and I laughed at the imagery created by outstanding writing. Mr Good Kisser or Jiff and Mr Right Next Door or Dante are both hot for Brandy. Throw in a big Italian Wedding and this story just got funnier and wilder. Brandy is Maid of Honor and is forced to wear a poofy dress in a hideous color, Dante is Best Man and looking hot in his tuxedo, oh yes, Jiff is coming as Brandy’s date. All of this fun and excitement while a murderer is on the loose. With lots of adult liquor flowing, the ending is surprising and perfect. Alyson Krawchuk brings the story to life. Plus, there’s more to come with Book 3!

I just finished listening to Dead and Breakfast, the second book in the New Orleans Go Cup Chronicles series. OMG! I loved it. I haven't laughed out loud at a book since I started reading and collecting Janet Evanovich books quite some time ago.

Brandy’s life is very busy. She’s trying to balance her relationship between Jiff and Dante, as well as, trying to solve the mystery of Brady’s best-friend Julia who finds the first guest of her new bed and breakfast murdered.

I can't remember the last time I was this excited about reading/(listening to) an author's entire series.

I thoroughly enjoyed this fun, easy, steamy listen. It's an intriguing story with well-defined characters and a good plot line. It kept me guessing until the end. Nicely done both by the author and auditor, though I'd have loved the hero to not sound so deadpanned. His accent was well done, however.
Award-Winning Mystery Author, Lynda Rees
lyndareesauthor.com
lyndareesauthor@gmail.com
Become A VIP and get FREE reads and exclusive content.
https://bit.ly/33fcOuy
Check out my books on Audible at: https://adbl.co/3jtBJAt

What would you do to help prove a friend’s innocence? Brandy fights with her loyalty to her friend who has been accused of murdering a B&B guest & her childhood cop boyfriend. Each encounter she has when compiling clues makes all their lives more complicated. As NOLA people & places put her deeper into danger, the action picks up speed. An idiotic Italian wedding Brandy is invited to be part of adds more mayhem & mischief to the mix. All together love & this lady again bring plenty of kooky quirks to the tale. Completely crazy characters always deliver drama & daring deeds sure to keep you interested & laughing all the while.

NOLA, Italian weddings, and murder complicated by relationships. Sounds like a winning combo to me! Filled with misdirections and red herrings plus angst and laughs, I loved it!
Alison Krawchuk did her usual fantastic interpretation!

Dead and Breakfast is a fun cozy mystery. It's the second book in the New Orleans go cup chronicles. Colleen Mooney gives us some interesting characters. Worth checking out for cozy mystery fans.

Hilarious and quirky story with a murder mystery t

The wonderful characters and quirky situations had me laughing out loud while I wracked my brain trying to solve the murder mystery. OK, I failed to solve it. There is a section of the book about a big Italian wedding that had me cracking up and I loved all the references to New Orleans life and culture. I am not from there so I cannot verify the local information or accents, but I thoroughly enjoyed the romp. There is the ditsy owner of the B&B who could not resist a roll between the sheets with Guitarzan the lead guitarist in the band and the metro-sexual ex-con she hires who (he or she?) turns out to be a great seamstress. And the lead character has two hunky men that she is stringing along because she cannot make up her mind on which one to fall for. That is messy enough but add a murder and other shady situations and you have the perfect cozy mystery! I heard the audio version and I loved the narrator too.

I got this as a free review copy and am willing leaving this review. To start great narration great story line. I sure didn't see the end coming. It had me guessing and I still got it wrong. Thrilling through and through.

Finding a dead body oat the Bed and Breakfast is never a good thing. When your best friend is covered in blood, has her panties swinging from the chandelier, and has no recollection of what happened the night before... well then it’s time to start investigating.

Colleen Mooney has written another fun, cozy mystery with quirky characters, set in the heart of New Orleans.

The narration, by Alyson Krawchuck, was well done.