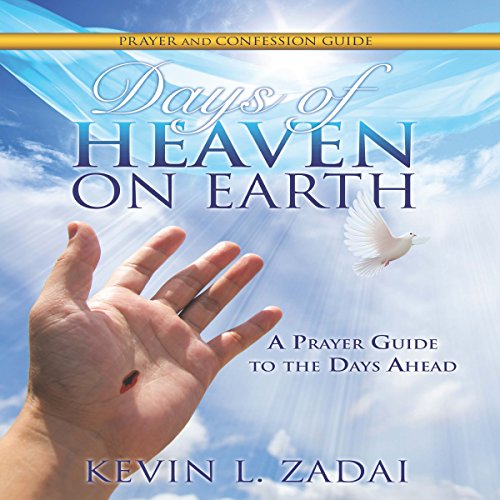 Days of Heaven on Earth Prayer and Confession Guide

Do you have the desire for more revelation of God's word? How about heavenly visitations from Jesus, the Holy Spirit, and angels? How would you like to experience; days of Heaven on Earth; as the Book of Deuteronomy teaches? Well the realm of the supernatural is waiting for you! Be prepared for an end time encounter as Heaven touches earth and your lamps are well supplied with oil for the next exciting move of the spirit. Jump in; the move is already here! You need to pray and confess what he is saying and implement it into your life. After sharing my story with everyone through the book, Heavenly Visitation: A Guide to Participating in the Supernatural and the book Days of Heaven on Earth: A Guide to the Days Ahead, the Lord commissioned me to produce this book, Prayers and Confessions for Days of Heaven on Earth: A Prayer Guide to the Days Ahead. It is a detailed prayer and confession guide in the areas that Jesus reviewed and revealed to me during several visitations. This book will help your prayer life go to the next level and reveal the person of Jesus from a Biblical perspective.

Kevin Zadai was called to ministry at the age of 10. He attended Central Bible College in Springfield, Missouri, where he received a Bachelor of Arts in Theology. Later, he received training in Missions at Rhema Bible College. At age 31, during a routine day surgery, he found himself on the 'other side of the veil' with Jesus. For 45 minutes, the Master revealed spiritual truths before returning him to his body and assigning him to a supernatural ministry. Kevin holds a Commercial Pilot license and has been employed by Southwest Airlines for 28 years as a flight attendant. He and his wife, Kathi, reside in New Orleans, Louisiana.

Will bring you peace and healing! Just what I need and I will listen to it again often!!

Sweetness of the Lord

One of the best prayers audio material on the earth.
His Spirit within so enjoy its fragrance and atmosphere in the midst of Heavenly Realm. My heart trembles rejoice and melts in The Fire. Glorious Waves of Abba Father with His Promises echo laud in The Secret Place.

loved it, couldn't put it down! A good read, finished it in one sitting. Lots of prayers and confessions. The Word!