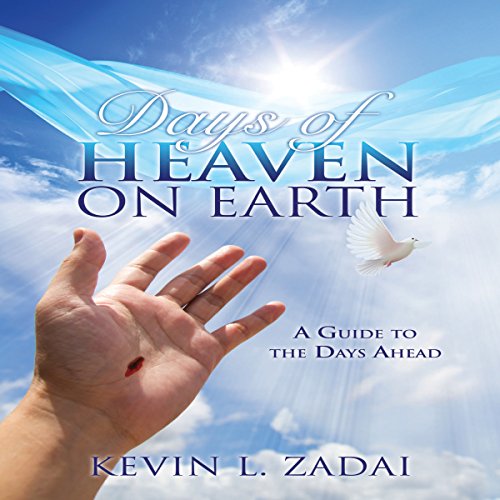 Days of Heaven on Earth

It all began on a fateful day in 1992, when author Kevin Zadai died on a hospital operating table after a surgery. While in heaven, he came face to face with the Savior, Jesus Christ, who later came to Kevin regularly in visitations after he survived his near-death experience. What Jesus revealed to Kevin in visitations about God's upcoming kingdom on Earth and Jesus' future return are revealed in his new nonfiction book, Days of Heaven on Earth. The chapters focus on encouraging listeners toward the renewing of the mind, becoming born again through the blood of Jesus, and being fed in spirit by the Bible. Kevin also discusses the personality of Jesus, as revealed in the Bible, and guidance Jesus showed Kevin for furthering a relationship with Him. The hope is for listeners to learn to trust God for their lives and love others while preparing for Jesus's return.

God spoke to me through this book so much!

This author's experiences and the things God has taught him ring true and match or at least correlate with SO MANY things that I have experienced and heard from God in my own walk with Him. What a blessing! I was also given plenty of new insight to think and pray about. Thank you, Kevin, for obeying and writing this book. I am also a writer on assignment from the Lord. Your faithfulness spurs me to actually get serious and write and stop even entertaining any hesitation. It's about Kingdom Life!

It was a blessing. I Learned so much!

It was a blessing. I Learned so much! I would encourage others to buy the book

Testimonies to stirr up faith!

Loved to learn about Kevin's journey and his testimonies. Amazing book to revisit concepts and stirr up faith!

Excellent book read well by Mr. Horton. Powerful content; very transformative! I strongly recommend this book to an person who wants to know more about Jesus!

There is something captivating about people's stories and experience. This book is about Kevin's experience of Jesus. It is absolutely worth listening to and learning from. In fact, it is so packed with wonderful information that you will probably not get it all the first time.
I have enjoyed this book enormously and listened to it more than once.
Great book!

Listened in one sitting! Captivating !

Well after listening 7 times, and hearing more and more truth each time I definitely will listen again and again. Instructional, personal, revelatory! Definitely read and study the truth available in this book.

This Book is a divine Treatise that is relevant to the Church History. It does clearly offload The Kingdom of God Agenda for the now Earthly existing church. A must read for Disciples of Christ.

Such a great book, I listen to it over and over. It's a must have!

I so love this book! I have an audio copy. I was in awe of Kevin’s experience with the Lord. Speaking of the Glory of God in such detail was like being in Heaven! I so want to be yielded and submitted to live in the habitation of God! Thank you for stirring up my thirst for God 1000%🔥🔥🔥

This is not a story, it is a 2 hour 47 minute sermon. Can get this for free on TV everyday. This guy has several audio books averaging 1.5 hours each. He could have said it all in one book and gave people their money's worth. I can't believe that this has so many 5 star reviews; because, the sermon is not even good.